A Dirty Little Affair to Remember 1

Bookworm Scarlett spent four years of college lusting after gorgeous Bobby O’Brian with his Irish lilt, easy smiles, and gorgeous blue eyes. He was her every fantasy, but she was a mouse and kept to herself.

Almost two decades later they come together in a meeting and are kept together by a snowstorm.

Bobby remembered the sweet girl who’d trailed him around the campus, but now she’s a professional come into her own. Smart, sexy, shy and beautiful. She’s everything he’s ever wanted, he can’t keep his hands to himself, but what happens after the snow stops falling? 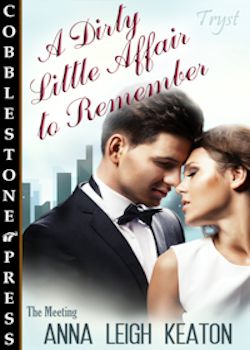 A Dirty Little Affair to Remember 1

More From A Dirty Little Affair to Remember 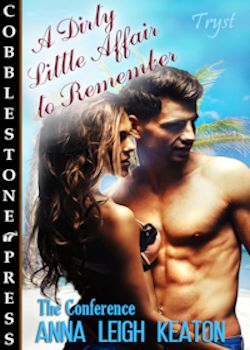 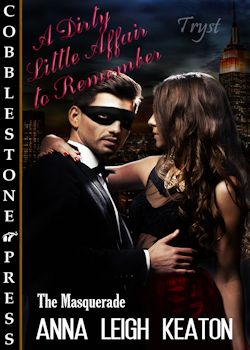 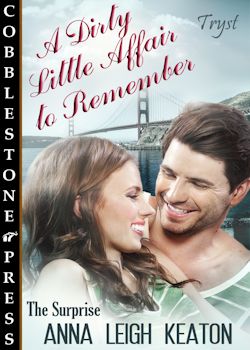 Scarlett Morris slid into the only empty seat in the packed boardroom and fumbled with her leather satchel to extract a legal pad and her favorite pen, which seemed to have fallen to the very bottom. She couldn’t find the damn thing.

Her head throbbed, and she prayed if she kept her head down none of her co-workers would notice her reddened eyes and Rudolph nose. She wasn’t a crier, and now she remembered why. She wasn’t one of those cute women who had a single tear daintily drip from one eye. Nope. She was a snotty, blubbery, sobbing, puffy-eyed mess when she cried. And she’d spent a good part of the morning in tears.

Fuck him. Fuck him ten ways to Sunday, the fuck face. She hoped his plane crashed or he had a heart attack while screwing that bimbo flight attendant.

Gritting her teeth, she scrabbled around in her bag until she got hold of the pen and pulled it out with a little too much triumph. Swallowing hard, she set her bag on the floor and poised her pen over the paper.

She should have called in sick. It wasn’t as if this was an important meeting. She was the VP of Manufacturing. This was a marketing meeting, which had little to do with her. She was only here because she needed to fill in for her boss. He was on spring break with his kids, enjoying some warm weather in Mexico, while she stayed here and froze her butt off. Spring, my ass.

Scarlett glanced up and around the table, hoping her bangs covered enough of her face so that no one noticed it was a blotchy mess. Not one person glanced her way; they had fallen silent and stared toward the front of the room. She turned her head to see what they looked at, and her breath lodged hard in her chest. She gasped, and then she choked.

Dropping her pen and covering her mouth, she squeezed her eyes shut as she tried to stifle the coughs.

Dear Lord, if you care about me at all, let the floor open up and swallow me whole.

The VP Finance, seated next to her, slapped her on the back a couple of times, making her fall forward and her eyes widen in pain. The woman on the other side of her, someone she’d never seen before, held out a bottle of water.

She grabbed the bottle, twisted the lid, and tipped it into her mouth, dribbling the liquid down her chin and onto the front of her blouse.

“Sorry,” she croaked to no one in particular.

Of course, when she looked up, all eyes in the room were on her, including the gorgeous, dark, bedroom eyes of the man who had been her fantasy all through college—and beyond.

Damn. It was definitely him. There was no mistaking that deep voice with the tiniest hint of Irish brogue to it.

“Scarlett. Morris. Yes. Thank you. Sorry.” She took another drink from the life-saving bottle of water.

His smile was the same as it had been eighteen years ago. Sweet, sexy, endearing. Only now he had a neatly trimmed black mustache and goatee that added a hint of the devil. His boyish, pumped-up, football playing good looks were gone, and now he was…

He was still muscular, solid biceps and shoulders evident under his light blue button-down. He’d removed his suit jacket and it hung over the back of his chair. His sleeves were rolled up, exposing lovely forearms with the perfect smattering of dark hair, but his tie was firmly in place. He looked comfortable. Confident. In charge. And just as mouth-wateringly yummy as he had eighteen years ago. Maturity had certainly worked in his favor.

“Well, now,” he said, tipping his head ever so slightly in her direction and giving her another little smile, “as I was saying…”

She didn’t hear a word. Rather, she didn’t hear the sensual, sexy sound of his voice form actual sentences. She’d dreamed of this man. For many years she’d used him to fulfill her late-night, lonely fantasies. They had graduated college together, and for the four years prior to that at University of Minnesota, she’d been not much better than a stalker.

She’d known his class schedule, when and where he usually ate lunch. His football schedule. She attended every game just for a glimpse of him, all sweaty and playing hard, even though she found sports boring.

She’d been a shy bookworm who maintained a ninety-eight percent grade point average. She didn’t go to parties, and she sure didn’t date. But there’d always been something about this one guy that made her crazy. Mostly, she’d just wanted to get through school and get out into the world where things would be different, where the bookworm would turn into a butterfly.

Turned out she’d pretty much remained the shy, nerdy girl. She had a great job but, as of this morning, she also had the official divorce decree from the court, ending her three year marriage.

Irreconcilable differences. Uncontested, of course, because even a brainy bookworm wasn’t dumb enough to stay where she wasn’t wanted. She got the car and the house. He got the busty blonde he’d been screwing for at least a year.

Worst of all? Scarlett had been completely and totally clueless about the fact that their marriage wasn’t perfect.

She jerked her mind away from Fuck Face and back to Robert O’Brian. Black hair, midnight blue eyes, killer smile. The ultimate tall, dark and handsome with the sexiest accent she’d ever heard. He’d also screwed his way through the entire cheerleading squad in his four years at U of M.

Scarlett had often wondered if that made him better in bed. Practice makes perfect, right? Fuck Face had blamed her for being cold, but maybe if he’d had as much practice as Robert, he could have warmed her up. She hadn’t been a virgin when she got with FF, but she’d been close. He had no patience. She thought it would get better the longer they were together. It hadn’t.

She’d resigned herself to living with it because she really did love him, cared about him, wanted to make him happy, rushing home at the end of each day to make sure he had a hot meal when he got home…whenever he got home.

But he’d sought out another woman instead of trying to make it work.

Scarlett bit her lip and watched Robert’s mouth move as he spoke. She was sure, if she were with someone like Robert, who so clearly knew what to do with a woman, she wouldn’t be cold. Or bored. That was what she’d been with FF. Bored. In the few years they were together, the sex had been monotonous. And when they were together, when they happened to have coinciding days off work, he watched sports and she read a book. She was pretty sure FF had never picked up anything more mind-stimulating than the Sports Illustrated swimsuit edition.

“…and that is why I hope you consider O’Brian Logistics as your leading partner in overseas distribution.” Robert’s confident smile made her tingle, especially since he was looking right at her when he flashed those gorgeously straight and ever-so-pearly whites.

Scarlett smiled and nodded, desperately ignoring the flutters in her tummy.

The CEO of Cappapelli Manufacturing, the company where Scarlett had worked for more years than she liked to consider, said, “Thank you, Mr. O’Brian. You have given me and my crew something to think about. Peter, do you have any questions?”

She stopped listening again. She was an engineer and didn’t care how her products got to where they were going. Transportation or logistics weren’t her problems. Her position put her in the middle, between the designers and builders of the fiddly little products Cappapelli sold. Their goods were used in almost every country around the world. Tiny items hidden in the mechanics of everything from cell phones to pencil sharpeners. How they got there? She had better things to do than sit in a meeting dealing with that part of the business.

Robert sat down and leaned back in his chair. What an alpha, what confidence. What a hunk. He had a slight smile on his lips as he listened to the conversations around the table, but those amazingly deep blue eyes were all business.