Serviced with a smile!

Time to buckle up it’s going to be a bumpy ride… Flying high with Alex Mathieson, who embraces life as an ever-so-friendly air steward with gay abandon. Until, that is, he falls for a handsome pilot, Peter, and a drastic decision sees him heading into unchartered territory, which may change his life forever.

This edition contains both new material and some content previously published as two short stories by Lydian Press. 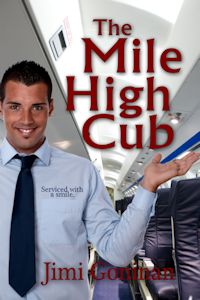 If that little monster doesn’t stop screaming I’m going to fold him up and stuff him in the overhead compartment!

Alex Mathieson focused his professional glare on the brat in 14E, as the child continued to treat the entire cabin to an epic tantrum. He could feel a headache starting to build, so Alex retreated to the galley, and saw his tired, cerulean-blue eyes reflected back at him in the small corner mirror. After smoothing a few errant strays of his chestnut-brown hair back into place, Alex briefly closed his eyes and started to gently massage his temples. His fingers moved in small, deliberate circles, in an effort to release the pain-inducing tension. Not for the first time, Alex questioned his choice of career…as well as the ethics of sedating children for travel.

The flight arrived on schedule at Charles de Gaulle, around nine in the evening, and as soon as all the passengers had been cleared from the plane, Alex made his escape. He grabbed his compact, purplish-blue luggage and headed straight to the restrooms to relieve himself, before he had to meet with the others to catch the shuttle to their apartment.

As Alex entered the restroom he almost ran face-first into a middle-aged man in a dark-gray suit that was on his way out.

Alex paused in the doorway briefly, watching the man walk away. The gentleman in question had quite a plain-looking face, but what had caught Alex’s attention was the large, bodybuilder-like frame straining against the suit. It reminded him of Peter – who had a very similar, rock-solid build. They had been playing together for about five years now and they’d always gotten along really well, personally as well as sexually. Peter was one of the first guys he’d met on the London gay scene and it was actually due to Peter’s influence that Alex had applied to work for Europe Air.

At thirty-four, Peter was a fair bit older than Alex but it didn’t particularly matter to either of them. Alex had been drawn to the pumped-up pilot from the first time they’d seen each other at a mutual friend’s cocktail party – lust at first sight. It had helped that Peter had an imposing, muscular body, with distinguished-looking salt and pepper hair and a devilishly handsome face…the fact that he also happened to be a decent guy was an unexpected bonus.

The pair had been playing with each other for so long that they knew how to get the other revved up in a heartbeat. Not to say that their sex had become formulaic; it just meant they got to each other’s pleasure spots far quicker than a stranger.

Alex much preferred to catch up at Peter’s apartment as the pilot lived alone, meaning they could fornicate all over the place and make as much noise as they wanted. Not that they couldn’t play at Alex’s place. Indeed, Alex’s flat mate, George, openly encouraged Alex in his manly pursuits. If truth be told, he was quite the social lad himself, and had a regular procession of gentlemen callers through the apartment.

To be honest, Alex had been thinking about Peter more and more lately – and not just how good the pilot’s cock felt when it was driving him hard…although that certainly made its way into his masturbatory fantasies on a regular basis. Alex was beginning to wonder if it wasn’t perhaps time for him to be a bit more serious about his love life and possibly settle down. He knew that Peter had been interested in pursuing a relationship after they’d been messing around for a few months but it wasn’t to be. Unfortunately, at the time, Alex had been new to the pleasures of man-on-man coupling and was only really concerned with meeting as many guys as he could – which turned out to be quite a few – so Peter had let the matter drop.

Yet, Alex kept coming back to Peter, unwilling to commit but unable to resist.