Persephone "Persey" Foyle, the Dowager Marchioness of Holbrooke, leads a happy, busy existence, tending her garden, overseeing her charitable missions, feuding with her stepson's wife and vetting potential suitors for her stepdaughter. As far as this lively widow is concerned, her life lacks nothing.

But when a young, famously-talented designer is hired to "improve" the grounds of Holbrooke estate—a task she has managed for eight years—Persey's comfortable world is threatened. It doesn't help that he's hired by her nemesis, the new marchioness, or that his talents are all the mode among England's Georgian aristocracy. He has no chance of impressing Persey. No chance at all.

Josias Radcliffe has worked hard for his success, and although he's been warned about the dowager, no "meddlesome old crone" will stand in the way of his latest triumph. Until he runs into a pretty maid on his first day and talks her into showing him through the Holbrooke maze. Soon his course is altered, his plans changed forever.

Because the dowager has secrets and Joss is the one person who could expose her as a fraud. He knew her when she was Long-Legged Meg—a scullery maid who spun tall tales, and, so it is rumored, used her knowledge of herbs and plants to dispatch her enemies. Folk say she used those long legs to carry her away from the gallows.

Have they carried her far enough? 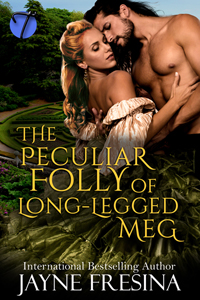 With no warning before they collided, and both moving at a fair pace until the moment of impact, they were caught in a vortex, his strong grip closed tightly around her. It was almost like being spun in a dance— a very rowdy May day dance where everybody had too much cider.

Persey could have sworn her heartbeat stopped completely for those few seconds as she swung through the air with the stranger's arms around her.

"Pardon me, ma'am," he wheezed, setting her down again on the grass.

Thick, muscular and browned by frequent exposure to sun, his limbs had taken possession of her for those few, startled seconds, and she was not at all sure whether it was the force of the strike, the sudden sensation of being airborne and flung about, or the powerful grip of one arm— which remained around her waist for several pulse beats longer than its partner— that caused her to stumble a second time.

Their equilibrium regained, he took a step back, finally releasing her.

Persey sheltered her eyes from the sun with one hand to get a better look at her assailant. His hands were well-used, the fingernails dark with grime. A black marking circled his wrist as if it were drawn upon the skin with ink. His chest and shoulders were broad, barely contained by a sweat-dampened, linen shirt and a simple flannel waistcoat. Above that came a thick neck and a face unshaven, but young. Dark hair, tied back in a simple tail. Brown eyes with a touch of reserved caution in the way they assessed her.

Persey prided herself on knowing the name of every worker on the estate, and always took time to learn about their families, maintaining a lively interest in births, weddings, and courtships. And she had certainly never laid eyes on this one before. But he must be a laborer who had worked long hours in the outdoors. In the next moment, it occurred to her that since his face was unfamiliar, he must be one of the new men brought in by that over-paid, pretentious idiot who fancied himself a "garden designer". Albert had mentioned she might see some of his workers about the place.

"Pardon me, ma'am," he said again, this time with a quick bow.

"You should look where you go, young man," she chided, quickly checking that she had lost no flowers from her trug. A few were crushed, but most had survived. Like her.

She stared up at him. Apparently he didn't know who she was. But then, she reasoned, how could he? She wore no jewelry, just a simple, midnight blue muslin gown with a stained pinafore over it — her usual attire when working in the garden. Perhaps it was a good thing if he mistook her for one of the household staff. This could be her chance to find out a little more about her new enemy by way of interrogating one of his minions.

So rather than make comment on his impudent remark, she swung her flower-filled trug against her hip, blinked her lashes and said, "Where might you be going in such haste?"

His eyes looked confused for a moment as he tilted his head to one side, studying her face, and then he gave a bit of a smile as he scratched one shoulder, before resting his knuckles on his hips. "To find the secret garden hidden yonder beyond all these hedges. I hear its well-tended." He glanced at her worn leather gauntlets. "Would you be one of the maids responsible?"

"Perhaps you'd be good enough to show me to it then? Since you know your way around the maze."

"You have an interest in gardens?"

With one hand he brought the loose end of his neck-cloth to his brow and mopped up the sweat that glistened there. "Aye. I have an interest." A slow grin bent his lips, a little apprehensively, she thought. "Especially if you show me. I wouldn't want to get lost, would I?"

Biting her lip, she considered. "I suppose I might spare a minute or two."

"Or half an hour." His gaze swept her with more heat than the sun, but then he quickly looked away, as if he felt burned. "I don't like to rush my way around a garden. I prefer to take my time. Don't like to miss anything."

She raised a hand to her neck, where a lock of loose hair stuck to her perspiring skin. "I have my duties to tend for the mistress."

His eyes returned for a longer look, their curiosity following the trail of her fingers. "I promise I won't keep you too long." Then he smiled. It began cautiously, unassuming, even a little quizzical, but once that smile reached full strength, it felt as if the sun dazzled her. Although his voice was calm and steady, his body rippled and pulsed with dangerous vitality beneath that shirt and waistcoat. And as he stood before her with his feet apart, head cocked, the sun shining on his hair, the Dowager Marchioness of Holbrooke was suddenly aware of a long dormant, now reawakened ... feistiness.

Persey hadn't blushed in front of a man since she was eighteen. She had forgotten what that felt like, until now. Tread with caution, she warned herself. "You're a new face."

"Just arrived." He reached over their heads, his fingers toying with a leaf from the arbor, very casual, as if he thought she would be accustomed to so much masculinity in a state of bold undress. Close enough to touch. The proximity raised her temperature another ten degrees, but he didn't seem bothered by it.

"You must work for that fancy garden designer." She took a step back.

His lip quirked. "Fancy?" He stepped toward her again. "What does that mean?"

"I hear he plans to dig the place up and ruin everything that generations have built, change the place so it doesn't look like itself anymore, and all in the interests of vanity and fashion."

A soft laugh tumbled out of his mouth, and surprise lifted his brows. "Word gets about. I just saw a stable lad who said, more or less, the same."

"Who told you that? The meddlesome old goat from the dower house?"

Persey caught her breath and looked down at her trug again while she composed her face.