The Search for Adam

Survival of the Fittest 2

Emily's passion for Jake means that she too is now trapped in a terrifying, alternative reality. It is a world ruled not by humans, but werewolves, and they are seeking blood after Adam betrayed their pack, choosing to save his brother's life and in doing so killing their leader. Emily thought she had seen the worst of Jake's world but nothing prepared her for the horrors they would have to face in order to find Adam, and save him, before the next full moon. 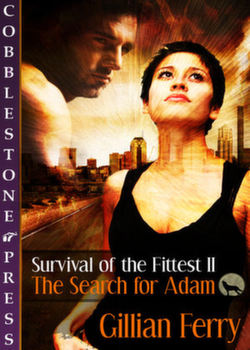 The Search for Adam

Survival of the Fittest 2

More From Survival of the Fittest 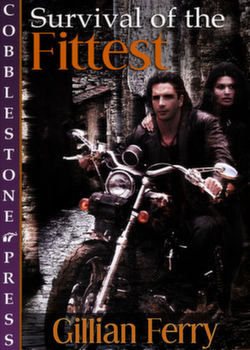 Survival of the Fittest
Gillian Ferry
In Shelf
$5.99

One moment Emily’s body stilled as she absorbed the merest touch of Jake’s lips against her own, and the next she was being thrown back toward the rear of the van as the windscreen imploded. Even as she struggled to comprehend what had just happened, Jake was already hurling himself toward the front of the vehicle, yelling her name as he went.

“Find a gun,” he commanded.

She could hear the screams of the guy who’d been in the passenger seat and the desperate reassurance of the person closest to him as he flailed around, trying to remove the metal stake that had pierced the armor of the windscreen and then his chest. Jake was by turn firing upon and pounding the butt of his gun against the long, hairy arm of the werewolf who was trying to maul anything it could reach. Patrick was driving, but the van veered wildly from left to right as he twisted and turned to keep himself safe from the savage claws.

“Shoot the fucker! For god’s sake, kill it!” he yelled.

Patrick’s reply melted into the chaos as Emily scrambled around on the floor of the van in near-pitch darkness, trying to find a weapon. Her whole body shook with the trauma of what was happening. Finally, her hand grasped cold steel, and she clambered toward Jake on all fours, the motion too violent to risk standing. She’d almost reached the front when the van quickly accelerated and she was thrown over onto her back once more.

“What the fuck?” Jake yelled as Patrick slammed on the brakes. He’d obviously meant to try and throw the werewolf off the front of the van, and as a tactic, it might have worked if the front tire hadn’t hit something, causing the van to somersault and smash into a solid mass on the street outside.

The immediate aftermath was silence. This time it was Emily who recovered first.

“Jake, where are you? Are you okay? Jake?” The van lay on its side, and she moved slowly, reaching out into the darkness until finally her fingers connected with skin that was warm, wet, and sticky. Her body instinctively recoiled with horror and was caught by a pair of strong hands that swallowed her into a tight embrace.

“I’m here; it’s okay,” he whispered in her ear, taking a second just for them.

“What the fuck were you doing?” Jake roared back.

“What the fuck was I doing? You weren’t the one with a pair of huge claws inches from your face. Who else we got?”

“We got one down in the back here. What about the guy up front?”

A couple of murmurs confirmed another two of the guys had made it. Patrick climbed over the seat into the back. “Ammunition?”

“From what I can tell, we’ve got a few rifles and a couple of handguns,” Jake replied while holding Emily firmly in his arms. “We need—” Whatever he was about to say was swallowed up by the impact of something hitting the back of the van with such force it was shunted several yards before juddering to a stop once more.

“Patrick, you cover the front.” Jake pointed as he issued orders. “You, the bottom, you, the top. I got the side; Emily, you got the rear,” Jake ordered, his voice decisive, cutting through any potential panic.

Emily braced herself against Jake’s side, her hands slipping on the gun’s surface as sweat ran down her back.

“Just don’t shoot until they’ve almost broken through. You’ll be fine,” he murmured in her ear.

His voice quieted her body and gave her strength amongst the despair because he didn’t question her ability or her place in the group. She swallowed hard, her gaze fixed on the black space she was to protect, and then the werewolves seemed to be everywhere at once. The van jerked violently, and they were catapulted around at the will of the creatures on the outside. A snarling snout pushed through the grate at the front as someone let off a hail of bullets. Emily saw small shards of gloom breaking through the metal of the van as the smell of wet dog and blood flooded the space.

A great howl filled the air and then…silence.

“Seems quiet out the front.”

“Everyone just stay put. We have nothing to lose by just waiting here,” Jake said.

Emily felt his hands run along her arms until they reached hers, still clenched tightly around the gun. “You can let go now; it’s okay,” he soothed.

Emily merely nodded and turned into the safety of his body.

Emily listened to the gentle snores of the men in the van and marveled at how they could sleep amongst such carnage. It had been several hours since the werewolves had ceased their onslaught on the vehicle, and at Jake’s suggestion, they had all agreed to hold still till morning. But, for Emily, the events of the night were too raw to allow sleep to overcome her, especially as the fatally injured still lay amongst them.

“Jake,” she whispered. He held her tightly against his stomach, her body a perfect fit for his. She turned to face him. “Are you awake?”

She knew he would be. Her own mind kept replaying the last moments before Adam, Jake’s brother, had run off into the night. They had gotten so close to saving him and then lost him once more.

“We will find him,” she said quietly, placing her hand along his rugged cheek.

In the gloom of the van, she saw him nod. Jake had been looking for his brother for years, ever since he’d been infected by werewolves during an operation by the resistance. He’d refused to help them ever since, terrified the next werewolf he might kill could be his own brother. “I just hope there’s enough left of Adam for Michael to help.”

“There has to be,” Emily insisted. “He risked his life to kill Ian and help us. He recognized Ginny’s song.” She moved her hand down onto his chest as she mentioned his baby sister, who, along with Jake and Adam’s parents, had been killed in a werewolf raid. The brothers had become almost feral themselves by the time the resistance found them.

“You’re right,” Jake agreed. He took her hand and kissed her gently on her palm. Even that small gesture had Emily’s blood racing. She’d never before experienced the desire she felt for Jake.

“I wish we were alone,” she murmured, touching his lips with her own.

“Lady—” He smiled as he spoke. “—you carry on and an audience of hundreds wouldn’t be able to stop me.” He pulled her in tighter toward him so she could feel the hardness of his erection. His hands slid down her back as his mouth found her neck.

“Oh god, Jake, you need to stop… otherwise… I want you so much.”

The sound of one of the guys turning over reminded them, just in time, that they were not alone.