Life sucked more than Tony thought possible. When Vampire Dragomir Eliade sucks out his mortal life, he finally fights back and wins in his own way. No longer bound by the awful curse of being a street fruit vendor, handsome Tony sets his sights on the goal of starting his own detective agency. He and his worshipful sidekick, Eliade, take a bite out of crime.

When a fearful father seeks help from the duo, Tony realizes that he is up against harsh odds. A statue looted from an Iraqi museum turns out to be an image possessed by the Evil Spirit, Iblis himself. The man, an antiques broker, knew that he was purchasing a stolen item. What he doesn’t know is that a Satanist cult wants the statue for its own, and to get it, its members have brainwashed his daughter and won her over to the side of evil. Will Tony have the power it takes to go up against the Evil Spirit, or will he and Eliade become the unwilling servants of the newly risen monster? 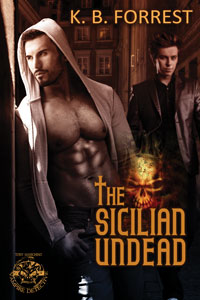 Some of the people were shaking with fear. A few had fallen to their knees, but there were real demons among the hapless, foolish youth dressed in Goth clothing with their black dyed hair and garish makeup.

One of these demons sneered and challenged Eliade. “Your Lord? Your powerful so-called Master? What a joke. If you were a demon of any merit you would know that this,” he pointed to the statue, “is the original Evil Spirit. There is no demon more powerful. Bow before your real lord and master, lest he kill you and your entire family.”

Eliade smirked. “I am already dead, as is my entire family. If this piece of excrement you call Iblis is so powerful, then let him prove it. My Lord, Master Manichino, can take this statue and shove it up your anus, you butt-dick!”

Tony smiled. He had tried to teach Eliade how to use modern cuss words, but the man always got it wrong. What the hell was a butt-dick?

The demon looked a bit perturbed, but he said, “Lord Iblis created all demons. As our creator, he is above all. He created evil thoughts, evil words, and evil deeds. That is his power.”

Eliade’s gaze bore into the demon. “Master Manichino is more powerful than any demon in this world and in all of the underworld. He can even go to church, although he chooses not to do so because of a great calamity called Vatican-Two. He even wears the cross of the Christians on his very neck and it burns him not. He walks about in the sun, yet he sucks the blood of both men and immortals. He does not fear holy water…no, he drinks it in small green bottles. He communes with the spirits of both heaven and earth. I have heard him conversing even with the being called God.” Eliade gulped so hard that Tony heard him.

“He is…” he paused as if about to make a huge announcement, “he is the son of a Pope! He has a ring kissed by his father! He takes and absorbs the souls of creatures to make their cunning his own. Do you wish to confront this greatest of all demons and be tortured as you are forced to serve him for eternity? He might even absorb you and then pass you out into a toilet like so much human waste. He can do that,” Eliade said with a shiver.

The demon glanced around uncertainly. “You lie. If there was such a creature, why have we not heard of him?”

Eliade looked at him as if he were a simpleton. “Why indeed. Why would such a great personality bother to make himself known to fleas like you? He is too great for that. I am his mere servant, but even I could pummel your buttocks with ease.”

The demon glanced around, probably signaling to his comrades. Tony watched as they shoved the humans aside and crowded around Eliade, who now stood looking like Dracula.