Humans settled the Moon and satellites orbiting the Earth were  a common sight, but with the abolition of NASA, humans had no desire to go further and space exploration died.

Then, a technician from the Very Large Array, a radio telescope in New Mexico, discovers powerful particles orbiting Saturn's moon, Titan, which could be a new energy source. Strangely enough, following the discovery's announcement, whales around the Earth changed their songs overnight.

As scion of the powerful Quinn Corporation, Thomas Quinn builds a solar saila vessel pushed by sunlight itselfto find the source of these particles in Titan's orbit. He gathers the best and brightest team to pilot his craft:  Jonathan Jefferson, an aging astronaut known as the last man on Mars; Natalie Freeman, a distinguished Navy captain; Myra Lee, a biologist, specializing in whale communication; and John O'Connell, the technician who first discovered the particles. All together they make a grand tour of the solar system and discover not only wonders but dangers beyond their imagination.

Drawing on his experience as an astronomer, David Lee Summers has created a story that is both exciting and plausible, one that can be enjoyed by both the young and young-at-heart who enjoy looking at the planets on a clear night and dreaming of what could be. 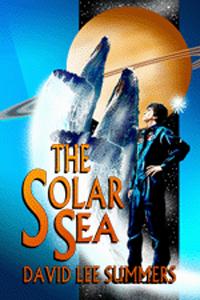 "In The Solar Sea, David Lee Summers creates a page-turning yarn with some of the most dramatic characters I've read in years. You won't want to put it down, and when you're done, you'll only want more."

J. Alan Erwine, author of The Opium of the People

"The Solar Sea is a high-tech science fiction adventure that spins a new twist on space exploration and alien encounters. Summers' descriptions of technology and scientific theories, along with his alien species, work together to raise the stakes and makes for an entertaining read for teens or adults alike.

Lights flickered on and off intermittently on the console. Before hitting the bow shock, Jupiter seemed to stand still. Now, it was easy to tell they were moving toward the planet. Even though the motion appeared slow, the dial on Pilot's console confirmed what he now realized, they were careening into the planet. Gently, he eased the sails around, trying to bring the ship into orbit. As he did, the ship began to shake violently, rattling his teeth. He was slowing the ship, but not fast enough. Jupiter's gravitational field, the collision of charged particles from the sun and Jupiter, along with photon pressure from both sources were causing the sails to vibrate at their resonant frequency.

"The masts are reaching critical stress," called Neb O'Connell from C-and-C. "If you don't back off the sails, they're going to snap."

"If I back off the sails, we'll go sailing right into the planet!" said Pilot through gritted teeth. "LaRue, give me some thrust! Help me out."

The ship's thrusters fired. If anything, the ship vibrated even more.

"There's a stress fracture developing on the number three sail." There was a hint of panic in Neb's voice. "We've got to do something quick or the ship's going to fly apart."

Pilot looked at the readout on his console and suddenly had a thought. He put his hands on the sail controls and locked his gaze on the clock on his console, counting down seconds. "Prepare to jettison number three sail," called Jefferson from C-and-C. "LaRue, stand by on thruster control. Get Berko to the towing shuttle, now."