In THE VEIL, vampire Detective Devon Harrigan and human Priestess Helene DuSolaire joined forces to save the world from a serial killer bent of tearing down the barrier between worlds and unleashing Hell on Earth. Just when they thought their problems were finished, the enemy they thought vanquished reaches across the Veil and takes Helene.

Now, Harrigan must put everything on the line, face his worst nightmares and the most powerful wizard in the universe, to march right into Hell and save the only woman he has ever loved. 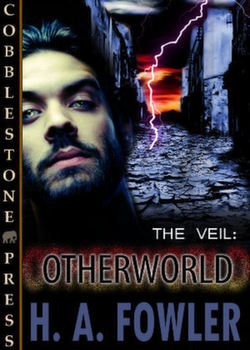 More From The Veil 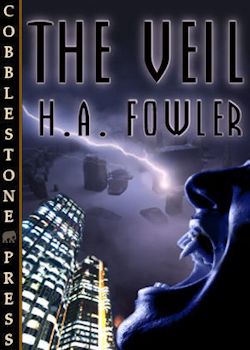 Helene Du Solaire never fully appreciated what a gift telepathy could be until she shared it with the man she loved. As she walked along the bustling city street, a phantom tongue laved a hot, wet path down her spine, sending a riot of shivers through her entire body, almost making her stumble.

Addendum: she never appreciated the gift of telepathy until she shared it with the wildly passionate, sometimes inappropriate and socially difficult, man she loved.

"Devon, I'm walking down a busy street on the way to the Temple. Would it be too much to ask that you refrain from mauling me until I get home tonight?" she chided him in her mind, but even her mental tone was one of love and laughter rather than true annoyance. There was nothing she enjoyed more than the sensation that he was with her every minute of every day. No matter how far apart their work took them, she could always reach out to touch and be touched. After twenty-six years filled with nothing but solitude, the realization that she would never be lonely again filled her heart with a warm wave of pure joy. However badly behaved he might be.

"Yes, actually. I have issues with impulse control," he replied.

The walk from her new apartment to the New Denver Temple of Light was the highlight of a day packed with so many blessings it was hard to keep track of them all. Just another afternoon in four months of pure bliss.

For the first time, Helene had a life. Independence she never dreamed she would have when she lived the strictly controlled, overprotected existence of an honored priestess. She had made friends who didn't treat her like some kind of untouchable goddess because of her position as Maitri—one of the leaders of her sect. And best of all, she had an amazing man who loved her for who she was on the inside as a woman, a person, for the things she accomplished by her own efforts, and not because she was supposed to be some mythical savior of the world.

The powers she and Devon had developed as a result of the battle with Aedius Quintin for control of the Veil were still mysterious and unpredictable, but each day they learned to harness them a little bit more. And sometimes even enjoy them. It certainly brought them closer together. The experience of dealing with all the changes managed to be both heavenly and hellish by turns. The bloodlust she sometimes experienced in the heat of passion could be arousing and frightening. Devon's sudden and unintended bouts of telekinesis—making his televid explode during an American football game that wasn't going his way, for example—had thrown them for a bit of a loop. She’d never had any clue that ties between two beings could be so profound, overwhelming or terrifying. So wonderful and erotic.

At that moment, Devon thought some very naughty thoughts at her, and her body responded like a dog to Pavlov's bell.

"Devon," she cried aloud and blushed when people passing on the street looked at her like the loon she must appear to be. Her lover, as wonderful as he was, could be incorrigible. His playful manner at inappropriate moments sometimes annoyed her. Only her bodyguards had learned to simply ignore her seemingly bizarre behavior. They marched alongside her like automatons programmed to protect her and, if they noticed anything else, they didn't let it show.

"Sorry, babe." Devon sent her a mental kiss, gentle and sweet, and she realized that no matter how irritated she might get, she could never stay angry with her vampire lover for long. His charm and effusive affection toward her was too much for her to resist.

After all, a vampire willing to walk into a holy temple and go up against the most powerful vampire clan in the world—his own, no less— to save her life most decidedly deserved some special consideration. Her lover was nothing less than a hero in her mind, and his rebellious nature was the foundation of that heroism.

She arrived at the Great Temple, pausing for a moment as she always did to admire its incredible crystalline beauty. The architectural marvel rose the equivalent of three stories above the street, the shape like a great sphere of crystal half buried in the concrete, enormous doors separated by columns of glass so perfectly clear that one could see through them to the crowds of worshippers gathering inside. The building stood as a testament to the Inter-dimensional Order of Light's dedication to exactly that: Light, both metaphorical and physical, as well as its great power and appreciation of magick's bounty.

It was a horrible irony that at the core of such goodness lay the darkest evil the world had ever known. Aedius Quintin, founder of the Order and creator of the very barrier that had saved the Earth from utter destruction by the monsters of the Otherworld, had turned out to be the worst of those nightmare creatures himself. More, he had all but created Helene, molded her young mind and power with his evil magick, and used her as the key in his scheme to enslave humanity—a scheme that took five centuries to enact and cost the lives of countless innocents.

The painful memories pierced her heart like a blade, nearly doubling her over in the street. The High Mage had been far more than her spiritual teacher and mentor. He had been the only parent, the only confidant, she had known since the day he took her from her biological family when she was eleven years old. To discover that she had been nothing more than a tool for his devious plans, that his evil infested her as well...

Helene stared up at the pillars of the temple, entranced by the way they sparkled in the morning sun. A sense of warmth filled her, washing away the despair and lingering fear that always threatened to overwhelm her when she thought of Aedius' betrayal of both herself and the world they were sworn to protect. But she knew it wasn't just the building itself and what it truly stood for that eased her pain, which made that betrayal bearable.

It was the memory of the first time she had brought Devon to look at it, one night shortly after their return from Italy where they had spent several weeks convalescing and getting better aquainted after the great battle for the Veil.

"Looks like the Hall of Justice," he'd observed. And then, of course, he'd had to explain the reference: a cartoon called "Superfriends" from his childhood. Then they spent the rest of that night alternately making love and watching the old animated program on digital vid in his ratty South Side apartment.

Now, she couldn't help but smile, remembering. The wonderful things she'd learned from her colorful lover meant more to her than all the dusty, ancient tomes she'd ever been forced to study for her position as Maitri and made the horror of those terrible days when the world almost ended at her hand fade by comparison.

She felt Devon rolling psychic eyes at her romantic sentiment, but also the little swell of pride that he felt in having given her something she considered valuable. It never ceased to amaze her how he could be so wonderful, so kind and sweet, so full of interesting, arcane information, and still believe he was somehow beneath her. He seemed surprised that she valued him so much, loved him so deeply. Helene wanted to spend the rest of her life surprising him that way.

"Thank you for walking with me," she whispered across their link. "But unless you care to attend services, we should raise our shields."

He could stay with her through the rite, but they had found out the hard way that even from a distance, the blessed power she raised during worship made him uncomfortable when he tried to sleep. That vampire fallibility never made sense to her. Why should any of the Goddess' creatures feel pain at evidence of her works? There were legends that said faith had to be involved for religious objects to be effective in repelling vampires, but she had found that not always to be the case. Vampires were repelled by human-made symbols of the divine, no matter the faith of the wielder.

"No thanks. Say hi to the Goddess for me. I love you, Your Holiness," Devon said. He brushed her mind with a wave of warmth, respect, desire and admiration that felt like a soft breeze from her scalp to her toes before he closed himself off from her mind.

Helene blushed, but quashed the urge to giggle like a besotted schoolgirl. Which, considering her lack of experience, she might as well be. Devon often overwhelmed her with the depth of his emotions, the passionate demonstrations of the way he cherished her. She felt warm, protected, wanted and needed all the time now. It was as though she had lived for twenty-six years on an ice floe somewhere in the blackest depths of space. Then Devon came along, melted the ice, filled her heart, colored her world, turned on the sun, and taught her about passion, true love, and friendship. For all of her power and the battalion of bodyguards that had accompanied her everywhere for as long as she could recall, it was only when she was with Devon that she felt truly whole and safe.

Perhaps it wasn't the most modern or independent of sentiments, but Helene already knew without a doubt that she could make her way in the world alone as a single woman. She had been forced to and knew she could do it again without hesitation. Now was the time to cherish being bound to another. Love had become part of her freedom.