Garlands of Thorn and May 1

Rowan Amhill loves the old traditions. That’s why she wears a thornfair gown for the festival. Her cousin, Hazel, laughs at her, her mother is impatient, her friend, Ash, accepts her ways, but to Flynt dan Apfel, the temptation is almost irresistible. His people are dying, and Rowan could help to save them. She’s willing. He refuses her sacrifice. Unfortunately for everyone, no is not an answer Rowan is willing to accept. 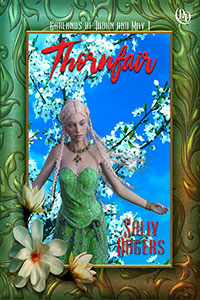 Garlands of Thorn and May 1

More From Garlands of Thorn and May 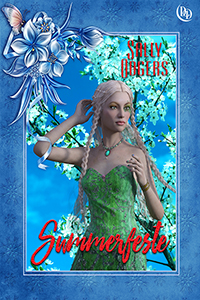 “Give me garlands of thorn

and the flower of the may

that I may be blessed with

a lover today,” Rowan sang as she wound her long braids around her head and secured them with a knotted ribbon. She shook out her green skirts with the garland embroidery and inspected herself in the polished looking glass. All winter she had worn her loose-wrapped leggings and a woollen tabard to market, but now it was spring, and at last she was eighteen!

Rowan opened her window and sniffed the scent of catkins and damp green growing things that wafted over the moors from forest and marsh.

and the petals of may line

the path that I’m setting

my foot on today…” she sang, half hoping her voice would drift out across the forest to the Farers’ Hill.

Someone giggled behind her, and Rowan focused on the figure that loomed in the depths of the glass. “What do you want, Hazel?”

Her cousin giggled again. “Never mind that. We all know what you want.” She advanced and propped her sharp chin on Rowan’s shoulder and rolled her eyes soulfully.

“Bless me with a lover today,” she chanted, her voice trilling and swooping. “And what would Aunt Tansy say about that, eh? Got anyone special in mind? Might his name begin with an A maybe?”

Rowan ducked her shoulder away and spun to face Hazel. “It’s just an old song. Must you spoil everything?”

Hazel snickered. “Spoil what? How can I spoil an old song I learned in cradle school? Bet old Dame Yarrow never really thought about what those words mean. I mean…tots of four or five lisping about lovers? Not that she ever had any lover herself, and now it’s too late. She must be a hundred or so, if she’s still alive. Are you coming to market with me or not?”

“I’m going on my own,” Rowan said, finally getting a word in.

Hazel pouted. “Do come. Mam says I have to take three cows this time, and how am I going to lead them all and carry the pails?”

“Hold a rope in each hand and one in your teeth,” Rowan retorted. She fluffed out her skirts again, turned, and curtsied to her reflection. “In case you hadn’t noticed, I’m wearing Great Grandam Mallow’s thornfair gown, and I don’t want to get it mixed up with cows. Mam will fuss at me if it gets torn.”

Hazel shrugged. “Don’t wear it to market, then. Save it for Summerfeste, if you must wear it at all. Nobody wears thornfair gowns any more. It just looks odd.”

Rowan waved her hand in her best grownup manner. “Be off, wench. Faugh! You smell of cow dung.”

Hazel spun deliberately in a circle then struck a pose and pointed at Rowan. “By divinity’s right and divinity’s might, I conjure to me the fairies’ sight. By my living song and my dower and wand, I see you’ll end up in the—” Her voice broke in a squeal as Rowan flung a posy holder at her, and she scampered out of the room and fled, giggling, down the stairs.

Rowan shook her head. Hazel was only a little younger than she was, but she was such a child. She mocked everything that was gracious and lovely with her sharp tongue. Rowan peered into the looking glass, and a shadow played over her face. She had been pleased with her image before her cousin’s intrusion, but now she saw a narrow-hipped girl with a thin face topped by a ridiculously elaborate crown of tawny-coloured braids.

It was so unfair. She loved the old days and the old ways, but her mother hadn’t a traditional bone in her body. Tansy Ironblade Amhill had probably never made a garland or kissed her hand to the hill in her life. It had taken much pleading before she’d agreed to help Rowan refurbish the thornfair gown. Hazel was correct. No one wore the gowns anymore, but there had been a time, not so very long ago, when every woman in Hillgift Village waited longingly for the first Thorn Fair after she turned eighteen. The graceful costume gave even the most ordinary girl an air of magic and mystery…or so it was said. Aside from this heirloom garment Mallow Amhill had treasured, Rowan had never seen a real thornfair gown.

There were no more real Thorn Fairs, either. Summerfeste was full of bustle and colour, but it was rowdy and drenched in mead and boisterous dancing. It lacked the romance and the magic of the festivals of old.

Rowan knew Tansy had little patience with traditions, and she ignored much of the lore she had learned as a child. Even the name she had given her daughter, Rowan, was a curse and a burden.

In the old days, so Dame Yarrow had informed her cradle schoolers, rowan trees had been planted as a charm against fairies, while everyone knew hazel wood was used for divining.

So, there was careless Cousin Hazel with a name that reeked of magical possibilities, while Rowan’s was a denial of everything she loved.

and a sorrow of thorn

shall I hang on my door

should he treat me with scorn,” she sang, but the charming tune now sounded tawdry and childish, so she left the rest of the song unsung.

A final glance in the glass told her everything was as near to her inner vision as she could make it, and she wrapped her new shawl around her shoulders. She had made it herself, from Daisy Marle’s best yarn, and had sewn it with the same garland design. It had taken her weeks.