On the way back from what should have been a routine road trip, Tamara is persuaded by her driving partner to stop off and see his not so sophisticated relatives. After a rather comedic trip to an outhouse, Tamara is rescued by a knight in slightly tarnished armor, at least to her way of thinking. He’s so gentle and tender in his care of her that she gives in to his seduction.

But the sexy, unsophisticated and slightly tarnished hick isn’t really what he seems. The deception makes her decision to keep it a one-nighter simple. But though she's back to her old routine and her current fiancé, she can't get him off of her mind.

Was it one night, or a lifetime? 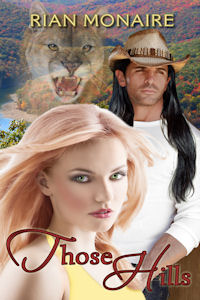 She lay on a dark cherry sleigh bed covered with a patchwork quilt in shades of green; not a priceless antique, but far from a junkyard find. The floors were bare wood, but relatively smooth, and the well-scrubbed wood gleamed. It seemed a huge difference from the ramshackle abode she'd seen down the hill. She found herself drifting into a doze, the pain easing as the drug worked into her system.
He emerged, clad only in the pair of faded but clean jeans, rubbing his hair with a towel. A faint, spicy scent filled the room. Wow. She found herself perking up. The hairlessness of his smooth, well-muscled chest further attested to Native American blood. Clean he was even more devastating. She shivered. No undies, either. Too bad he's a backwoods boy.
She gave herself a mental shake and slap. And too bad you have a boyfriend, hussy.
"How're you doin'?" he asked, tossing the towel on a chair, and flipping his hair back.
She flexed her foot experimentally, inhaling sharply as a flare of pain shot up her shin.
He nodded. "Yeah, wouldn't do that anytime soon. It's gonna stiffen up on ya." He moved to the dresser, tugged a drawer open and picked out a navy T-shirt, pulling it over his head.
Thank God, she thought. I couldn't have stood that much longer. Her heart was thudding erratically, and she could see her fingers trembling on top of the coverlet. Either she was going into shock, or he was bringing out some serious misbehavior-oriented urges on her part. Most likely the latter, though she felt exhausted, amazingly so.
He turned back to her. "Way I see it, you got a choice. You can stay all nasty in your traveling clothes, or you can get cleaned up. Seeing as you can't walk, it would mean leaving’ it up to me."
"You mean you would bathe me?"
"Done it before." He picked up a blue plastic comb from the dresser top and carefully worked it through his tangled strands.
"To whom?" She tried again to pull herself up.
He shrugged, a smile idling across full lips as he pulled a shock of hair over his shoulder, easing knots from the ends. "Someone's got to clean the stock for the fair."
She stared at him, open-mouthed.
He sighed. "Just a joke, ma'am. I promise not to look, and you'll be a lot more comfortable cleaned up."
Tamara had to admit that she had hardly been ocean-breeze fresh when she'd arrived, and with sweating, fainting in the crud, and bleeding, she was a real mess. The mere thought of moving had her sweating all over again. She didn't think she could even raise her arms to scratch her nose, much less shower. Besides, if he was going to attack her, he would have tied her up by now. She met his gaze, and nodded.

The Alpha Claims A Mate
Georgette St. Clair
In Shelf
$2.99
Tweets by
sirenbookstrand