Service. Honor. Sacrifice. Being a Soranian Lord or Lady means putting the needs of the land and its inhabitants before your own and performing the magic necessary to ensure good harvests and good health. Adimir, son of the Lord and Lady of Thelana, was raised to serve his estate and people and his physician-wife Miryea supports him--especially in the parts involving sex-magic and spanking.

But when portents suggest Adimir must give his very life to fend off an ancient demon, Miryea fights back with powers of her own, powers she’s still learning to use. An ancient, wise satyr from the hills of Thelana holds the secret to defeating the demon, but it's trapped in his memory by magic. To release it, Miryea needs to take a leap of faith into the satyr's arms and work sex-magic and healing magic in ways she never knew she could.

She finds her answer, but it demands yet another shocking price. Can submissive Miryea find the courage to hurt and humble the man she loves in order to save him and the people of Thelana? 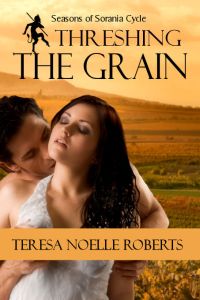 “My name is Evan and I hear,” the younger man said to Luke, just loud enough to be heard over the club’s pulsing industrial music, “that you’re into blood sports.” It was said in much the same tone you’d use to say, “I hear you’re a huge football fan” or “I hear you do web design,” and it froze Luke to the spot, unable to breathe through the rush of arousal.

Only one way to find out. “It depends on what you mean. I don’t like the fights better than the hockey game. And I don’t hunt…deer.” He smiled slowly, letting the desire and the blood-lust show in his expression.

Then he took a deep breath and settled into the almost innocent pleasure of observing his potential prey process this answer.

Delicious. Evan had the kind of skin that Luke liked best: the kind so pale that you could see the blue tracery of veins, as if you could see the spirit living within. The kind that marked so easily and showed cuts so vividly. Red on white in the most primal fashion. It didn’t hurt that he was model-handsome, but his skin was what really got to Luke. It just cried out to be marked lovingly and viciously. Evan had the air of toughness that Luke also required. He was slight, perhaps five-seven, but broad-shouldered for his size. Even from across the room, before he’d approached, Luke had noticed he moved like a martial artist. Based on years of experience, Luke judged he’d know how to ride an endorphin rush, how to open up to pain and transmute it to pleasure, how to surrender to the knife. He’d be able to take a lot before he cracked open and begged for mercy.

If he really wanted to take it. It still seemed too good to be true.