Alex is sure the alien invasion is imminent. Mohini has disappeared, and there are problems with the children at home. Her rebellious teen spreads her wings. Will Alex be able to pull it all together, or will the hourglass run out of sand? 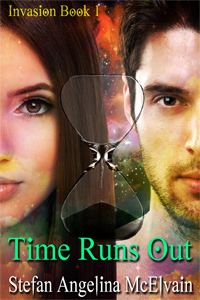 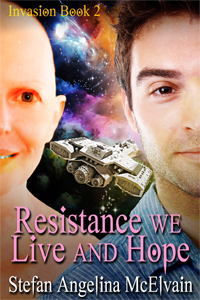 Resistance We Live And Hope
Stefan Angelina McElvain
In Shelf
$4.99 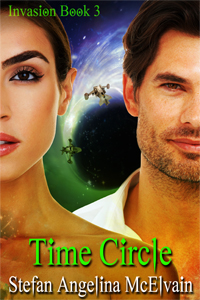 Our monthly meeting had become routine. Only ten people turned up. Am I the only one who senses the urgency? Where is Mohini? This was item number one on the agenda. We were sitting in the library at my home in Beverly Hills. My neighbors hated me. It had been non-stop construction for the past four years. The planning permit had said underground bunker, and there was one, now. The reality was very different. It had been all a smoke screen to allow us to get building equipment and materials into my own private bubble universe on the lawn. The grass had disappeared long ago under a pile of rubble.

I opened the meeting. “What’s happened to Mohini? She’s missing. I checked her memories and found nothing of substance. She was making good progress since Ananth had found four additional authentic bindi gems in India. She could finally make comparisons... oh... there’s a gap in her memory. How is that possible? Her last memory was pure euphoria, then nothing. She’s disappeared. I asked the League of Assassins to investigate, but still nothing. They couldn’t even find the jewels. Ananth is beside himself with worry and thinks he’s no longer worthy. I tried to sooth his worries and told him Shiva returned and reclaimed his bride. As our lead person in Bombay, India, he has bigger concerns, such as organizing the evacuation. Let’s begin the discussion, roundtable style. Peter, do you want to go first?”

Peter had been my first alternate self to re-connect. In his previous life he’d been lost and became Dracula. I rescued him. He had denied his female half and had gone quite mad. Now fully recovered and reintegrated, he leads the technical work we must complete if we are to survive the alien invasion. “Mother, I don’t know. I see exactly what you see. Do you think she got the third eye to work and actually stepped through into the alternate reality? Once there, she would have to search for her husband, Shiva, and we have no idea about time. It might run at a different rate. A hundred years here could be one year there or vice versa. I’ll give my invasion update later. Milos, it’s your turn.”

Milos, another version of me, had been in a previous life Hermaphroditus, the adopted son of Aphrodite and Hermes. “Mother, I’ve nothing to add. Next month, if it’s okay, I’ll participate telepathically. This travel is a waste of my valuable time. I’m sure an Egyptian god, and not just any god, but the Sun God himself, will be able to contribute. Ra, or just plain old John Large, it’s all yours!”

“Thank you. I’m sure spending time with your toy-boy, Randy, is more important than saving the planet.” He then turned toward Alex. “Alex, I think she got the bindi third eye to work and without thinking just stepped through. That would explain her total disappearance. She is no longer in our reality. The memory lapses, I think, are more serious. It means one—or more—of you has an extra ability. They can erase memories, or at the very least restrict who can read them.”

“That’s scary, one of us?” For some reason Elaine’s name popped up in my awareness.

Elaine, are you listening telepathically? Do you have anything to contribute?

No Mother, I do not. It all sounds very silly to me and I have more important things to do.

“Okay, let’s continue with the roundtable. Will, you’re up.”

“I have nothing on Mohini’s disappearance. You’re way too lenient with Elaine. You have given her so much rope she’ll hang herself. I’ll defer to Grace.”

“Alex, my love, I have nothing. It’s either a bubble universe, time jump, or a different reality. I like the alternate reality idea. She’s run away to find her true love.”

“Spoken like a true succubus queen. I actually agree with you and Ra. Everyone, check to see if there are any other memory lapses or holes. In the meantime, Hiroshi, my teacher, what wisdom do you have?”

“I’m confident she hasn’t abandoned us. We should move on. You have one more time-traveling clone to discover and lots of prep work if we’re going to have any chance against an alien race capable of jumping across a galaxy.”