Dancing in the Rain 3

Has Dana finally found the love she's been searching for only to lose everything to the Destri, the mythical nemesis of her people? Not if she has anything to say about it!

Battling their way past the hordes of zombies still haunting the cities across the Chain of Worlds, Dana and the two warriors who have pledged to be at her side 'til death should separate them, must find a way to circumnavigate the danger posed by the black dragon guarding the skies between worlds to connect the net that will foil the race of giant insectoids. 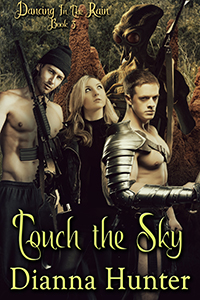 Dancing in the Rain 3 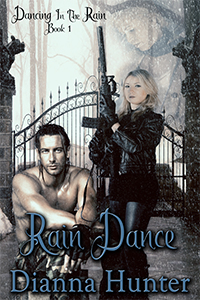 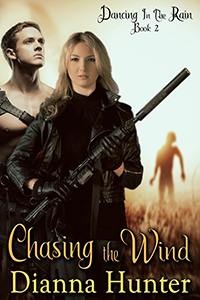 It was a great day for traveling. The air had just that perfect edge of crispness that was not too cold or too hot, and all the trees and bushes crowding close along the trail were decked out in the bright red and orange of their fall finery. Birdsong vibrated on the air—yup, just a glorious day. If you didn't mind the dust and flies that is! Damned things looked big enough to carry off your whole lunch. And what was that smell? Surely I'd have noticed if horses normally smelled this way.

Of course this big, rocking chunk of fly-bait was not actually a horse. These things much more closely resembled large, long-legged lizards than the creatures I normally knew as a horse. They weren't totally ugly. Their slick hides of tight scales came in a wide range of colors. The one I was riding was actually a nice shade of electric blue, well, under the layers of dirt and sweat it was anyway.

I think I could almost have tolerated the smelly creatures if they weren't so ill-natured. "Knock it off!" I swatted the ornery thing across the snout as he tried to take a bite out of my knee—again. In retaliation, he humped his back and swung his head from side-to-side in a half-hearted buck while skipping two steps to the side. When I jabbed him in the ribs with my heels, the stupid thing rolled his eyes back at me and Hawwwd like a damned jackass!

"Are you giving that poor creature a hard time again?" Finn laughed as he drew back on the reins of his mount, so he was riding beside me. How come he always got the sweet, even-tempered one?

“A bit,” I answered between gritted teeth. “What did you say these cantankerous things were called, anyway?”

“I believe the guide called them laren. It translates into something like rainbow horse. I guess for their colors," Reece informed me as he joined the conversation.

“Yeah, well I don’t care how many colors their hides are. Next time I get to choose what we ride,” I griped good-naturedly. I wasn’t really mad, just annoyed with the whole business of having to move overland like this. I thought about the creatures' name for a moment and added, “Wasn’t rump-of-laren on last night's menu?” I sniffed again and added, “Really glad I didn't try it.”

Sighing, I removed the wide-brimmed hat I was wearing to keep the sun off my head and shook the heavy braid I’d confined the long locks of my white-blonde hair in before we set out this morning. Ignoring the glorious scenery of the mountain trail we'd been following for the last hour, I leaned back and let the light breeze blowing over us cool my head and neck before jamming the hat back down over the braid. The brief exposure to the blazing sun left me with the sudden urge to renew my sunscreen.

I was half-turned, shuffling around in the leather bag that was strapped to the back of my saddle when I heard the faint hiss and rumble of rocks slipping. Instantly alert, I ran my gaze from the exposed heads of boulders and scraggly brush clinging to the lower shelf and along the upper wall and the many narrow ledges jutting from the irregular wall of the canyon we were traveling through until I found the source. A small cloud of dust hovered over a thin stream of loose rocks and debris where the mini avalanche had jammed against a tumble of larger rocks, but I didn't see anything else moving.

"What is it, Dana?" Finn asked as he followed the direction of my gaze.

"It's nothing," I said and shuttered. "Guess I'm just a little jittery. I'm not used to traveling overland like this." We rarely had to travel in this manner. The world of Torainia was a new addition to our League of Worlds. Greentree was still strutting around, accepting the accolades for the acquisition of a new trade world but right now we were also paying the price of establishing transfer locks across this new world.

As exciting as it sounded on the surface, the problem was that we were shifters…so far only the capital city of Montagne De Vista was mapped, the remaining sectors would have to wait until our shifters had the time to map and mark the landscape. Until then, we were limited to transport through our only established portal, which was in Montagne De Vista. To reach the outlying areas we were forced to employ a local guide and transportation. That is if we didn't want to end up embedded in the side of a mountain or on the bottom of a lake.

Finn, Reece and I had arrived through the portal late yesterday, but we’d been forced to spend the night in the city before we could join this small caravan. It was making its usual weekly trek to our destination of Crystal Springs, a small mountain village about thirty miles north of the city.

"How much longer do you figure it will take to reach this village?" I asked Finn, again.

"We should be reaching the crest of this range shortly," Finn patiently answered my query. "The village lies in the valley below." He reached over and patted my leg. "It won't be as bad returning to the portal, we'll be able to shift now that we know the way." I knew that look he cut me, you know, the one eyebrow cocked and that so very sexy mouth of his smirking at me, that look that said he knew I knew all this and I was just being grippy.