Two Dukes are Better Than One

On the surface, Cromwell Stone and Huxley Brigmore loathed each other. From their school days at Eaton to their ascension as peers of the realm, the two dukes could be counted on to be on opposite sides of an argument. However, only a trusted few knew that the passion they shared was deeper and more forbidden than whose horse would win at Newmarket. Not only did they go through women like they changed their cravats, they did it together.

Lady Sophia Hodges’ obsession with tarot cards and the spirit world would have labeled her as odd, if not for the fact the Queen shares her interest. While searching for a connection with her dead mother, she narrowly avoids a scandal with Cromwell Stone. She blames that erotic manuscript she's been reading in secret for giving her such unnatural curiosities. When Sophia is powerless to stop her father from gambling away their livelihood, and even less able to stop him from arranging a marriage to Stone, she consults her tea leaves and sees a future rife with passion and other confusing portents.

Little did her father know, she secretly loved another duke. Huxley Brigmore never even looked her way, but she had fallen for him ever since he chased off a gang of ruffians who had been about to accost her. Now, she was going to marry his arch enemy, Stone, and be hated by default.

Only it doesn't work out quite that way as it seems both men are intent on pursuing her and fulfilling every naughty fantasy a well-bred virgin shouldn't even be having. When the tarot leads the three of them to try to solve a mystery surrounding Huxley's family, they face peril and forbidden passion in an attempt to find the perfect future. 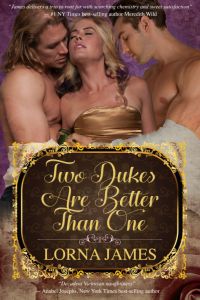 Two Dukes are Better Than One

“Tell me more about this book,” he said, watching her face flame.

Her mouth opened and closed very fast before she lunged out into the hallway. Topping off his drink, he said to the cat, “I love mysteries.”

He followed after her, unhurriedly. The tail end of her skirt disappeared as she darted into a drawing room, only to come barreling out of it moments later. Sophia spotted him and hurried down the hall to the stairs. He glanced in the room to find Huxley and the widow Henrietta North in a state of disarray.

“You bastard,” Stone said, without heat. “Starting without me.”

“Why are you chasing Sophia Hodges?” Huxley asked, smoothing his shirt.

“No.” Stone closed the door on them. Bugger him. Huxley could have the widow all to himself. Stone wanted to hear about Sophia’s book.

He caught up with her in the gardens. She was talking to herself while trying to catch her breath. It must be difficult to walk that fast in a corset and all those petticoats.

Leaning up against the wall, he listened in.

“Haunted? Really?” She groaned. “How could I have been so stupid?” Sophia started to pace and then caught herself up short when she saw Stone watching her. “Did they put you up to this?”

“I have no idea what you’re talking about,” he said. “But you’ve managed to put some life back into this party.”

“I think Lady Camden’s friends told me a story about the library being haunted, just so they could see what I would do.” She crossed her arms over her ample bosom, and since she was distracted, Stone looked his fill.

“It sounds like something those biddies would come up with. But I assure you, I was not part of their amusement.”

She peered him as if she would search his soul. He could have saved her the trouble—he didn’t have one. The only thing he feared was boredom. He lived for the pleasure that his title and his money provided him. In fact, if she could see what he was thinking right now, she’d probably run off screaming. Or maybe not.

“Tell me more about this book,” he said, and her face flamed again. “The one you were apologizing to your dead mother about.”

She pressed her hands to her cheeks. “I beg you, Your Grace. Do not tell anyone about that. Forget what you heard. If my father finds out…if anyone finds out…I’ll be ruined.”

“The cost of my silence is information, my dear.” He finished his drink and nodded to a couple walking by in the garden ahead of them.

Lady Camden’s guests whispered as they glanced at whom he was talking to. Maybe these few moments with him would stir up some marriage prospects for her. Feeling noble, Stone stuck out his chest. It was almost like he was doing a charitable deed. It was bound to be more than entertaining than helping orphans, at least.

After making sure there wasn’t anyone close enough to overhear, Sophia said, “It’s a 17th century manuscript called The Convent Life Chronicles.”

“Sounds dreadful,” he drawled. Apparently, he and the virgin had a different idea about what happened between a man and a woman.

She lowered her voice. “It’s about a man disguised as a nun and how the lovely novices are…”

Sophia whispered the last word, and Stone leaned forward. He couldn’t possibly have heard that correctly. “I’m sorry, what did you say?”

“Punished, Your Grace. How they are punished. In a most base and vulgar fashion.”

She was looking up at his eyebrow again.

Lowering her head, she mumbled, “Yes, Your Grace.” 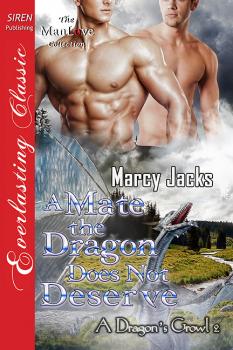 A Mate the Dragon Does Not Deserve (MM)
Marcy Jacks
In Shelf
$4.50