Faith Jenkins has lost her faith in Christmas. Not only did she never celebrate Christmas as a child, but last year, a few days before the holiday, she was dumped by the man she thought was "The One". To save herself from further heartache, she's vowed never to let another man into her heart.

Enter Jeremy Kitteridge, Faith's fun-loving neighbor, a man who adores Christmas and seems to adore Faith as well. His sexy smiles and obvious advances are not lost on her, but she's determined to keep her promise to herself, guarding her heart. Yet Jeremy is just as determined to show Faith the magic of Christmas come hell or high water!

When Jeremy finally gets her underneath the mistletoe, will he be able to slip under her armor and win her heart? Or will Faith be too afraid to take another chance on love? 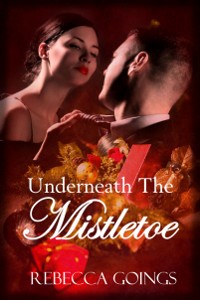 “Relax,” Jeremy whispered as he held her to him gently. “I don’t bite.”

“I know,” she said, unable to meet his eye. “But it’s not every day a girl gets to dance with Santa. It’s a little overwhelming.”

“Don’t worry, sweetheart.” He grinned as he pulled her closer. “It’s nothing a little mistletoe can’t fix.”

She looked up at him in confusion until she realized they’d stopped dancing. He pointed upward with his gloved hand, and she followed his gaze. There, directly above them, was an innocent sprig of mistletoe dangling from the ceiling.

“You’ve got to be kidding,” she murmured, staring into his eyes.

He shook his head and gave her a sinful smile, pulling his beard down past his chin. “Not even remotely.”

“You arranged this.” She scowled at him, trying hard not to chuckle at his feigned innocence.

She socked him in the shoulder. “It’s a dirty trick and you know it.”

He shrugged again, grinning from ear to ear. “Who are we to shirk an age-old tradition?”

“Ah, sweet Faith,” he whispered as he dipped his head, “if there’s one thing you need to learn about me, it’s that I never do anything just to ‘get it over with.’ I’m going to kiss you now, and you’re going to feel it clear to your toes.”

Without giving her a chance to argue further, his mouth swooped down and captured hers. The contact shocked her more than anything. Instantly, a bolt of desire raced through her veins. She could feel his tongue gently pressing against her lips, and she suddenly forgot they were in a ballroom amidst a crowd of people. Her common sense screamed at her to step away, to push him back and keep him at arm’s length, but the passionate heat coiling inside her won out.

Faith realized she wanted to know what Jeremy Kitteridge tasted like.