Vows of the Goddess

The cursed Skylar McCallister discovers a forgery and draws the attention of two dangerous men with hidden agendas. Skylar is reluctant to honor her grandfather’s last request and return her family’s heirloom, a stone statue, back to the Goddess Pele’s temple before she destroys the area with lava. Thane Ekewaka, descendant of the Goddess Pele, must retrieve the statue from the McCallister family and use the idol to lead him to an ancient device. Together, they’ll face a vengeful mercenary, a wolf and tiger shifter, their attraction for each other, and be forced to participate in a challenge designed by the Goddess herself—can they break the curse and find the treasure in time? 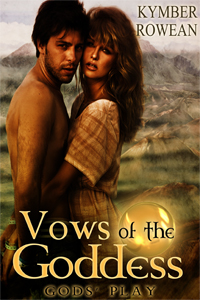 Vows of the Goddess

Skylar finished her notes on the eighteenth-century sea chest for the Petersons. She reread the description.

The odor of lime and fennel drifted into the shop overwhelmed by heavy scent of rain. Skylar stifled her groan. The gutters picked the damnedest time to buckle and drenched the unsuspecting visitor. She’d intended to fix them yesterday, but the day didn’t cooperate. She rose from the writing desk and gathered up her folder on her way to the display counter.

A drumbeat resounded in her skull. Skylar sighed. Lemonade time. No matter how awful this meeting turned out, she’d turn it into something positive.

“Your continued denial of her obsessive behavior,” the woman said from the sidewalk, “makes it obvious changes are coming. You continue to pander to her whims with boyish adoration, Chau.”

“Oppose her if you choose. I’ll stand on your right and avoid the knife in my back.” Chau continued to hold the door open.

A truck rumbled down the main street. Skylar missed the woman’s response. She avoided eavesdropping on customers’ conversation. It reminded Skylar of the gossips who needed a life that didn’t involve her. Skylar slid the finished index card into a box the Petersons kept on the counter to provide detailed information on the antiques they’d recovered. Skylar plucked a handful of freshly laundered cloth napkins from a basket. She started to fold them while the couple stood in the doorway.

A petite woman entered the store enshrouded in an autumn-colored fringed shawl. Chau closed the door behind them. The woman removed the shawl and revealed a black silk dress suit.

“Better a pussy with my hide intact—” Chau stated.

Skylar announced her presence before the conversation turned…um, ugly. “Welcome.”

The woman smiled and smoothed the dress over her hips and replied with a tight voice, “Thank you.”

“Please, feel free to look around. If you have any questions, I’ll be happy to answer them.” Skylar folded a linen napkin in half. Her fingers pressed the edges. She folded a series of triangles until she produced an origami crane.

With the ease of a cat entwining itself around one’s legs, the woman strolled around a trio of dining room sets. “Your store contains many unique pieces. I find myself both surprised and impressed with your selection.”

Skylar mounted the linen origami crane on an overturned teacup. She reached for a second napkin and studied the strangers and the personal space they maintained between each other. Their tension thickened the air. They weren’t a couple. Their earlier conversation hinted at a confrontation on the horizon. Who they were and what they did outside of the antique store was none of Skylar’s business. She made the last fold on the Lotus blossom napkin. She resisted the temptation to fold another napkin. “Thank you. Are you interested in anything special? Is this a personal item, or for a gift?”

Details fascinated Skylar and people were no exception.

Chau divided his attention between the street and their activity in the shop. Did Chau catch a glimpse of the FBI agent assigned to shadow her? Skylar had, first thing this morning. The agent needed additional field training if his mark could identify him. Why did Skylar need a guard anyhow? She possessed an eye for detail. With her need for accuracy, she’d identified a forgery at the Chicago Art Institute, where she’d been commissioned to assemble a catalog. Skylar’s discovery left the catalog in limbo. The FBI requested she remain in the state—she was now a key witness to an art theft.