What's A Lady Got To Do To Change Her Life?

What would you do if everyone close to you is taken away? Leanne discovers journals she never knew her mom kept and realizes that her mom had the same undiscovered desire to paint as Leanne has, but never did. Left with a large inheritance and insurance payouts Leanne Benson decides to pursue her life’s dream of painting and goes on a road trip to the place her parents met, the wild Canadian Rockies. Only life is often stated as being stranger than fiction and while looking for a possible Mr. or Mrs. Future Right on her journey, Leanne encounters the unexpected. 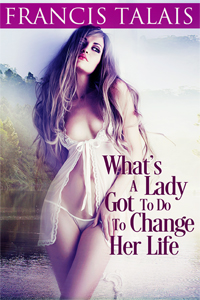 What's A Lady Got To Do To Change Her Life?

More From What's A Lady Got To Do

What's A Lady Got To Do To Change Her Life?
Francis Talais
In Shelf
$4.99
All Books In Cart
All Books In Bookshelf
Excerpt

“I’m Dr. Johnson from Cedars-Sinai Hospital. I hate to inform you that we were called to your father’s house, Robert Benson, late last night by the alarm company.” The man spoke coldly.

“Was he broken into? Is he okay?” Leanne gasped as she was getting ready to head out the door for work. A glance at the wall clock told her she wasn’t late yet.

“No, apparently Robert set off the house alarm, telling the alarm company he was having a heart attack.” The displaced voice on the other end of the phone line spoke without emotion.

“What do you mean having, is he okay?” Her dad hadn’t been getting along well, health wise, since her mom passed away last year. Leanne and her husband Ben had been trying to get him into a nursing home, although he looked well the last time she’d visited. He was too stubborn to leave and how could she blame him, all of his children had grown up in that house.

Speaking of Ben, where was he, wasn’t he supposed to be home by now from his business flight out of New York? Maybe it was delayed, she’d call in a minute.

“I’m afraid he died before we could get him to the hospital.” Cold and distant. How many times had he called to break others news as tragic as this?

“Wha...” Leanne stared stunned at her cell phone as it beeped, alerting her via her house monitor app to the fact someone was at her front door.

The front door bell rang a second later. “Crap, better not be some bloody salesmen at this time of the day. At least not now, anyway.”

One always expects the worst when their parents get old, but expecting and experiencing it are whole other stories. Tears threatened as realizations kicked in. Robert, her dad, the man that had always been there for her, was gone.

Numbness ran through her as she pulled up the camera image on her app, it was the police. No doubt to let her know about her dad.

“Ah, gotta go. The police are here at the door, probably to tell me the same news you just did. I’ll call back in a second.” She clicked off her phone before a response could be made and strolled to the front door, fighting back tears. Leanne opened the door and stared into the face of a handsome, square-jawed officer.

“Yeah, I just heard, my father passed away.”

The handsome cop looked at her quizzically then down at the paper he held. “Ah, yes, ma’am news can travel fast these days. He suffered massive internal injuries, and there was nothing the hospital could do. I’m so sorry.”

“Heart attack? No, from the car crash he was in.”

“What? He was at home, I just got a call from the hospital.”

The police officer winced, glanced at her oddly and looked at the paper in his hands. “Does your father drive a Mercedes AMG Roadster license plate 3247 HWV?”

“Ah, no, that’s my husband’s car.” Her heart thumped hard.

“Is your husband, Ben Benson?”

“Yes.” Everything began to spin in front of her.

“I’m so sorry to inform you that Ben Benson died from injuries sustained in a vehicular accident at six-ten this morning.”

Her legs wobbled, and the world spun away. The officer struggled to catch Leanne as she slumped to the ground.