One hundred years have passed since the city of Allew fell to an orc onslaught led by Sart and Selene. The Western Continent has sent scout ships to the East every year since the fall to assess the situation, but the enigmatic Selart Empire hasn’t yielded any secrets.

Kit is a mage on one of those scouting missions. The mission is an utter failure, and Kit is shipwrecked on the northern extremes of the Western Continent. Stranded far from home, he must negotiate his way through the mysterious territory of the neutral Fae Kingdom, unravel the secrets of an old helmet, and root out traitors in his home town of Azure Bay.

Danger lurks around every corner, friends can’t be trusted, foes can become allies, and Kit will learn what consequences await him when dragons die. 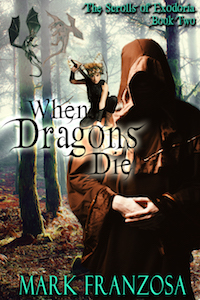 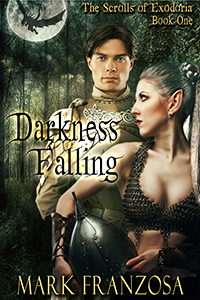 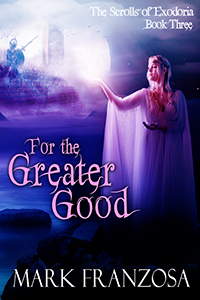 “I hope you’re almost done daydreaming,” Captain Smyth said, waking Kit from his reverie. “We are nearing the zone of eternal twilight. You know, you really should be glad they put you on my ship. This is my sixth scouting run, and I haven’t lost a ship yet. They claim this new ship, Mermaid’s Kiss, is designed to be the fastest ship in the world, and you’re on her.”

“Yes, yes, you’ve told me that six times already,” Kit muttered under his breath so the captain couldn’t hear him. More loudly he asked, “So tell me about this eternal twilight thing again. How does this work?”

“Nobody knows ‘cept those two evil sorcerers in their tower. A few years after the loss of Allew, the moon suddenly disappeared from the night sky, and all the tides stopped. Our scouts discovered that when they crossed a certain point in the ocean, everything got foggy and dark. When they came out of the fog, Allew was in sight, with the moon hanging low in the sky right over the city. It has been there ever since.

“There is a tall tower rising out of the middle of the city, and the moon is directly above that tower. The moon never moves, and the sun never rises. It’s an eternal twilight. We really don’t know anything else, because we always end up being attacked by catapult fire from the city and being forced to retreat. You’re here to protect us from the catapult fire while we scout the shore for any changes that would make an invasion easier.”

At that moment a thick fog appeared seemingly out of nowhere and quickly enveloped the ship in a suffocating white shroud. The entire crew became silent in the fog, and the only sound was the soft splash of water and the creaking of the boards on the wooden ship. The minutes ticked by, and as quickly as it had appeared, the fog vanished. The ship was again sailing on calm seas, only now in an eerie half-light.

The full moon hung low in the sky, just as Captain Smyth had said. There were fires visibly burning on top of the walls of the city, and a bright light shone from the top of a tall tower in the center of town.

Dark storm clouds gathered above them, turning the sky an inky black. A voice thundered from the towering mass above them, “Captain Smyth, you’ve returned with a new mage, I see. When will you learn? Did you tell him what happened to the last mage?”

Kit shot the captain a questioning look but didn’t say anything. The captain spoke up, “Sart, let’s cut the crap! We go through this every year. You mock me and then fire your catapults. We just want to talk to you. We will still accept your unconditional surrender for mass murder and treason.”

The waves became rough and rocked the boat as laughter erupted from the clouds. A female voice took over as the laughter faded into the background, “You’ll have to forgive Sart for not being able to talk, he’s laughing so hard he can’t catch his breath. This always seems to happen when he talks with you, Captain. It’s still funny after all these years. But really, you humans are arrogant pricks, aren’t you? It’s no wonder Sart wants nothing to do with you. You’ve invaded our territory yet again, as you’ve been doing for a hundred years, and then call for us to surrender? You’re violating our borders yet again, after we’ve done nothing to you. That all changes tonight!” She started laughing a chilling laugh that faded out, and then everything went silent.

“Be prepared for the catapult fire boy!” Captain Smyth called to Kit, “This is when it usually begins.”

Kit walked to the bow of the ship, ready to deflect any flying boulders, but nothing came. As the clouds broke up overhead, letting the eerie twilight resume, he saw why. Coming at them out of the shadows, full sail, was a fleet of orc warships. There were at least a dozen they could see, the hulls painted black with dragons carved into the prows, and they slipped swiftly through the water toward the Mermaid’s Kiss.