In an English town budding with the new religion at Christmastime, an old god still shows up in the darkest of places. One such ancient setting is the Darkwood Forest just outside the meadow near Levinia's home. After her husband is lost in a hunting accident, she must come to terms with his death. The day after Christmas, she calls upon the cast out god, Jul, by burning the Yule log and wishing for the one thing Jul is known for, allowing the spirits of the dead to mingle with the living. 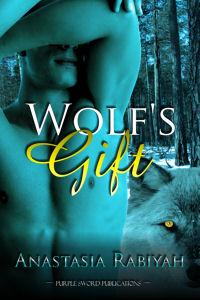 "Levinia has lost the love of her life to a terrible accident. Friends told her they had seen the wolf they were hunting take her husband. Wolves are still hunting her sheep. She's able to kill one with a bow but not before it bit her. Lost and alone she prays to her old god to send her husband Borys back to her at least one more time.

"Anastasia Rabiyah combines old and new religion in Levinia's life with a bit of paranormal. The budding Christian religion makes her feel a little guilty for calling on the gods of old, but she'll do anything to see her beloved. Both religions fare well in many ways as the author lets us wonder what it is that brings her husband back. Perhaps he's longed for her as much as she has for him and it's the bite from the wolf that brings him back. We're left to ponder some things but not the love between Borys and Levinia. This is a unique and very special love story."

A howl broke the silence outside. This time she was sure of what it was. She closed the door and slid the bar down to keep it in place, not that a wolf could push open a door, could it? Fingering the handle of the bow, she breathed in deeper the underlying scent of hay. The first time they'd made love it had been in this barn amongst the fresh straw. The feel of his lips against her neck lingered in her memory, the heat of his skin touching hers, the thrill of being alone, finally able to give herself to him after waiting for so long.

She leaned her head against the door and closed her eyes. It began as a playful game of teasing and tickling, hands knotting and testing limits. She'd leaned up and brushed her lips over his. Borys balked, but smiled his sideways grin, his brown eyes glistening with mischief and a familiar hint of desire. He'd pushed her down into the itchy hay and kissed her into submission.

Something ran across the snow, its paws crunching just outside the door. She wondered if loud noises would frighten it away. Levinia had never seen a wolf before. She'd only shot her husband's bow a few times, and she wasn't good at it. She backed away into the dwindling light. Claws scratched against wood. It whimpered.

"Go away!" she shouted, startling the sheep. They flinched and skittered backward. Small bleats echoed in the barn.

The animal outside whined.

Levinia stared at the bow, and wondered if she could do it, if she could kill a wolf, much less anything at all. She clenched her teeth and swallowed her fear. Taking a step forward, she decided she must confront what had taken away her happiness. One hand shot out, no longer shaking. The wooden bar slid up and away. It was dark outside, so no shadow of legs cast itself beneath the door. She knew the wolf was there though. She knew it had to be the one that killed her husband. Now it had arrived to take her as well.

An Arrangement of Three
Anastasia Rabiyah
In Shelf
$4.99
Tweets by
sirenbookstrand