You had Me at Hello

Sofia is on her way home by train from another boring business trip. A stranger approached her in the dark needing a bed for the night, she had the perfect place, an empty berth above her. He pleads his case, “I’m Chandler Riggs.” He’s broke and no place to sleep. With no time to think, her heart beating like a drum, she hesitates, but couldn’t say no.

The next morning unexpectedly her life tumbles in turmoil when she walks up behind Chandler as he’s telling the porter they are engaged to be married. What was he doing? She barely knew his name. She had to stop him, as she started a familiar voice echoed from behind her.

“Sofia! When were you going to tell me, you’re getting married?” There he stood, the one man she could never lie to, her boss. Suddenly, she is faced with her dignity on the line, and again, no time to think, her heart beating like a drum, she hesitates, but said yes!

She is faced with the biggest decision of her life, tell the truth or see where it goes?​ 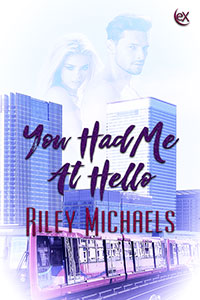 You had Me at Hello

Sofia Lincoln was returning home from another business trip. Had the decision been Sofia’s, all business trips would have been removed from the menu. The train was pulling out from the passenger station, and she had one aisle to herself. For a while she sat and watched the countryside streaking past her. The mountains themselves seemed frozen in a geologic instant of upheaval. Monoliths of bare, thrusting granite, they rose harsh and unyielding and were, in a primeval way, beautiful. In places, time had softened their contours with a carpet of rich green forest but still hadn’t conquered them. Exhausted from the craziness of the day, she was looking forward to a good night’s rest. It would be a perfect ending to a long evening.

Sofia gently eased her hand into her purse, and, careful to not drop anything, she removed a pair of spongy ear plugs she kept just for special occasions. The plugs would help her sleep by dampening the loud noises from the bumping and jostling beneath her berth.

In nearly complete darkness, it was not easy to keep her footing on a moving train. Sofia stumbled around in her sleeping car, trying to be considerate and not wake anyone. Suddenly, out of the corner of her eye, she noticed someone standing in the middle of the aisle. Sofia shook her head slowly but didn’t drop her gaze. Standing in the shadows, she peered into the darkness, straining for a better view of a tall, thin man, who was apparently walking towards her. Maybe he was a foreigner who couldn’t speak English or was lost.

Had anyone seen this guy enter the compartment? Sofia’s heart raced with fear, and, shaking in her shoes, she stepped closer to get a better look at the stranger. Sofia eyed the handsome man warily, strongly aware of his presence. It unsettled her to be fixated on a man she couldn’t clearly see.

He was easily more than six feet tall, with broad shoulders and slim hips. The black suit adorning him was tailored to his body in a way that left nothing to her imagination, and he wore it with the ease of a man clearly accustomed to the finer things in life. His face was classically handsome, high cheek bones contrasting with bright-blue eyes with an expression of intelligence. There was a smile on a strong mouth, a mouth every woman would like to stick their lips to, including Sofia. He had a confident smile and an eager expression.

He was a perfect stranger, and chances were there would never again be another moment like this. Her amused curiosity turned to dismay when she realized he was approaching her. Sure enough, he stopped right in front of her, pulled out a boarding pass, and held it in his hand.

What can he possibly want from me?

A kind of stillness hung in the air. Nothing happened and nothing was said.

Sofia wasn’t a stranger to one-night stands. He was attractive enough for her to sleep with. There was nothing written anywhere that stated she must be married to have sex with a man. Strength and passion seized her, and she did like her fun. Sensible as she was, she never kept a man long enough to settle down with him.

“I’m sorry if I startled you, ma’am,” he said in a loud whisper, obviously taking care not to wake anyone. “Please allow me to introduce myself. I’m Chandler Riggs. I am hoping you will let me stay with you tonight.” His voice sounded oddly reasonable.

Had he said what Sofia thought she’d heard? Be that as it might, chances like this never happened to her. Her first impulse was to blurt out no, then yell for the porter, yet the words never made it to her lips. Satisfying her curiosity, she allowed her gaze to roam freely over him. He was magnificently made. This guy had her all right—right in the palm of his hand.

Her eyes widened, lips parted from a touch of panic, and a sense of sudden awareness came, but he was just a man, a perfect specimen of the male species, but still a man.

With a sigh of relief and a bit of effort, Sofia concluded she was unable to articulate any questions, even in her mind. It was her last night away in the middle of nowhere. Who would know if she had her fun? “Please,” she started in a quivery voice, lifting a hand to indicate her reluctance to move forward. “Are there no other sleeping berths available?” she managed to say without difficulty.

“Of course,” he conceded. “Unfortunately, I am not able to pay for one.” He hesitated, breaking eye contact. “To be honest, if I may, I lost all my money at the casino in Monte Carlo. Please, you mustn’t think I’m a compulsive gambler. That was my first time, and my last. It was a very expensive lesson,” Chandler exclaimed quietly.

She gritted her teeth and smiled. “This train left from Nice, not Monte Carlo,” she parried quickly. It was a lie, and she knew it. That was easy enough, or so she thought.

“Don’t I know, ma’am. I was able to obtain a ticket.” Chandler looked at her steadily. “I had to hitch a ride in Monte Carlo, and I walked a good part of the way. While in Nice, I looked for someone who would take pity and lend me enough money for a ticket. All I could manage to borrow was enough for a one-way ticket to Paris. I’d be very grateful if you were to let me use your empty berth just for tonight,” he said. “I can pay you for the price of a ticket when we get there. I would truly be grateful.”

He seemed like the type who was used to getting what he wanted. Instead being turned off, Sofia found him even more interesting. A man with no scruples and way too much ambition. “Where’s your luggage?”

“I couldn’t pay my hotel bill either, so they kept my things until I can get back to pick them up. As you can see, I’m in a rather difficult position. Once I get to Paris, I’ll be all right. I have friends waiting for me there.” His impromptu explanation sounded reasonable.
“Why didn’t you get in touch with your friends in Paris before boarding the train?” Sofia inquired softly. “They could have sent you the money for a berth.”

He turned to face her. “There wasn’t time. I have a very important meeting in Paris,” he snapped. “Look, I know all this must seem strange to you, but it is true, I assure you. If my situation doesn’t inspire you to take pity, then I’ll leave and ask you to please accept my sincere apologies. Besides, you don’t seem to be the type of person who could be so cruel.”

Thinking of her own exhaustion and happy to have the berth, she decided it would be cruel to deny as good looking a man as Chandler a good night’s sleep. She studied his lean, good-humored face, considering his honesty. “My intuition tells me I’ll be safe with you. You don’t look the least bit dangerous,” she responded. “I don’t make a habit of doing such things as this, as long as you know.” Being forced to sit up through the entire trip would have been grueling. “Are you sure sleeping is all you want?”

Hesitant, with eyes half-mast, her handsome stranger’s calmness made Sofia’s heart pound. How stupid was she to have asked that? She’d made a fool of herself without letting anyone else in on it.