A young bride, Jan is eager to begin her life with her new husband. When Jan’s husband is away on an extended business trip, his sexy younger brother shows Jan every kindness, reminding her of the carefree days she enjoyed as a single woman. Time spent with the fun loving brother is a welcome reprieve from the lectures of proper behavior given by Jan’s mother-in-law. Stern warnings by the older woman to stay away from this man go unheeded by the newlywed, drawing Jan closer and closer to the brother whose intentions are not as they seem and whose identity is a closely guarded family secret. 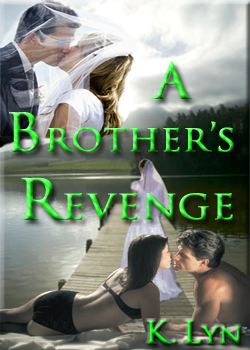 Charm had drawn Jan to John, charm and the sexy swagger in his walk. John had a slight southern accent, though he had grown up in the north. Jan often teased him about his southern accent, and John would smile and come back with some far fetched story of how he had acquired his slight drawl. One time John had told Jan that he had been stolen as a baby and raised by gypsies. John’s sense of humor only added to his charm, and John’s charm had taken Jan’s breath away from their very first date. Now Jan was Mrs. John Powell, though she insisted that she be addressed by her first name, and she also insisted that she was not Mrs. John Powell. She was Mrs. Jan Powell.

After drinking the glass of wine so quickly and after feeling the soft lips of Kent, his beard tickling her, Jan no longer knew what she had meant. It had been a long time since she had been kissed, or at least it seemed that way to Jan. She missed John. She missed the weight of a man’s body on hers. She needed a man. She needed John.

Jan set her glass down and began to move away when she felt Kent’s strong arms pull her to him. He kissed her cheek and then he kissed the side of her neck. He smelled so good that Jan found him hard to resist.

“Kent, I can’t,” she started, but his lips had moved to hers.

Jan couldn’t wait to hear some dirt on the woman who was determined to make her life miserable.

“When Mr. Powell was in the service, it seems that his lovely bride couldn’t keep her panties on,” Martha continued, her laughter sinister.

“What is it, Martha? What did my holier-than-thou mother-in-law do?”

“She had an affair, Jan, with some guy who lived right here in Greenport, but he moved away.”