A Cad and Seducer - Part One

Julian Vosper-Smith is a cad and a seducer, a wit and a raconteur. Every man wants to be him and every girl wants to shag him, and now you too can share in his success. Follow his amusing stories and helpful advice as he imparts the wisdom of his ample experience of sexual self-indulgence, whether it's the best systems for picking up poppets, or handy hints for escaping the wrath of jealous partners. Always ready, as suave as he is sophisticated, occasionally down but never out, Julian is the perfect inspiration for every up and coming young man about town, while some may regard his behaviour towards young ladies as somewhat discreditable, he can be guaranteed not to leave them dissatisfied. 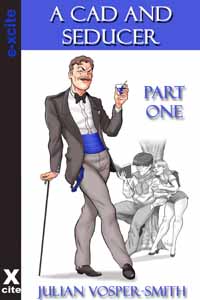 A Cad and Seducer - Part One

Allow me to introduce myself, Julian Vosper-Smith Esq. I have the good fortune to be in receipt of a comfortable income, the result of wise investment by my late parents, but let’s not worry about that, far too dull. What does matter is that I have plenty of time on my hands, and that while another might have chosen to spend his time racing fast cars or making a bloody nuisance of himself in politics, I choose to indulge my favourite hobby – girls.
I make no excuse for this, and I really don’t see why I should be expected to. There’s far too much nonsense talked nowadays about now a man should behave towards a woman, as if girls were made of bone china. They’re not, and what they like is good company, plenty of treats and a damn good rogering afterwards – or a nice hard shag if you prefer the modern term. Or to put it another way, as a magnificently busty young writer once remarked to me, what women enjoy is cock.
The knack, of course, is to make sure you’re the one whose cock they enjoy while not allowing yourself to be manoeuvred into a situation in which they feel they have sole rights. I like to think I’m rather good at that, and while looks and money certainly play a part, what it really comes down to is character. You see, I am what used to be known as a cad, even a thoroughgoing cad, which really only meant a gentleman with the common sense and the guts to do as he pleased, because believe me, everybody would like to.
Take Charlotte, a delightful little blonde moppet I met when taking the Jaguar in to be serviced. She was the receptionist at the garage, and with a couple of hours to kill talking to her was really the only sensible way to pass the time. It took me two days to winkle her out of her knickers, but I rather like that. Too quick a conquest spoils the hunt. Once out of them, she was absolute mustard, not one of these passive girls who expect a man to do all the work, although they too have their charm, but keen, inventive and a right little trollop to boot. For example, it usually takes a little coaxing to get a girl to sit on your face, but she suggested it herself and was soon queened up in style, dress up and panties down, wiggling her sweet little derrière and demanding that I lick her bottom hole. Naturally I did. One has to oblige.
She was also happy to entertain me with the occasional striptease, an expert at the fine art of cock sucking and didn’t mind the occasional spanking, just the ticket. Naturally I was keen to make her a regular, but after a month or so her conversation began to include topics such as how best to match the colours of upholstery and wallpaper, always guaranteed to start the warning bells ringing. Now a lesser man would have chosen that moment to inform her that he was in fact married, or some such vulgar ruse. Not I.
My choice was to wait until we were in bed together that evening and suggest a threesome. It was a risky gambit, I grant you, very much make or break, but if there’s one thing I can guarantee it’s that while many a girl finds it exciting to watch her lover in up to his balls in her best friend’s pussy, she’s going to think twice about marrying him.

Beyond 50
D.L. King
In Shelf
$0.00
Tweets by
sirenbookstrand