Mine for the Night

In a future where an interstellar foe has infected humans with a virus that destroys males entering puberty, the only way to save the human race involves a bold plan. Males are kept on hormone suppression, until they reach 25 years of age and their bodies have outlived the virus they are born with. With hundreds of viable women to each maturing male, carefully selected pods of four women to each man are assigned. But before those men take their place in their pods, they belong to the female scientists who made the suppression possible...for one night of completely uninhibited sex.

NOTE: This story was originally released in THE COUGAR BOOK (ed Jolie duPre). It is available in ebook and print from Logical-Lust.

Mine for the Night

"Are you ready, Doctor?" the ancient woman in the doorway asked, a gleam of jealousy in her eyes.

Sondra ignored it. Late in her eighties, the handler was old enough to have had her pick of men before the plague had struck Earth. The wrinkled hag was old enough to have been married and have had a man to herself, or nearly to herself, for many years before the plague killed him off. She might even have raised a son to adulthood before he was lost to her. If she hadn't, the crone was a fool who'd squandered her chance, and Sondra had no time for fools.

At forty-five, Sondra had had her first man less than five years earlier. She was one of only thirty thousand of the remaining quarter billion women on Earth young enough to bed a man who'd had since the first had been saved by the very process she'd helped created to repopulate the world.

Moreover, Sondra had worked her ass off to save the world. It was a small reward she reaped for it.

As if her gimlet stare had clued the handler as to how out of line her petty emotions were, the elder woman shifted uncomfortably and cleared her throat, her face going a deep crimson.

Sondra straightened the files on her desk, making a show of ignoring her. "I am indeed," she finally answered.

The handler withdrew, and the door to the male habitat closed behind her. Sondra set about her preparations.

She unbuttoned the top few buttons on her blouse to show the edge of lace and cleavage. The rest of the time was spent in busy work: fluffing the pillows on the bed in her combination office and apartment, smoothing the blankets, and setting nonessentials off the desk. Since every man reacted differently to his reintegration into society, she never knew how the first time would pass, and it was better to be safe than sorry.

Sondra straightened at the knock, her slit hot and wet already. "Come in."

Oh, he will come in. They always did.

The man was more enticing in person than he'd been on the monitors. Then again, they usually were.

Three months off the suppressants, he had gained muscle, and a light smattering of male curls decorated his broad chest. Sondra's mouth watered for that first taste of twenty-five luscious years of uneducated male specimen. Since half of the group they'd tried to mature at twenty-three had perished, she dared not move the process back further. 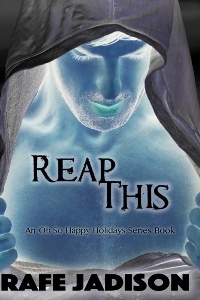 Reap This (MM)
Rafe Jadison
In Shelf
$0.00
Tweets by
sirenbookstrand