She battles blazing fires and battles for respect

As a woman firefighter, Marcie O'Dwyer can never let down her guard. She knows it might cost her life. However, Ray Smith just might slip past her defenses. He poses the biggest threat...to her heart. There is no room for her in his life...

Hard-hearted, Ray Smith has sworn never to fall in love again. Only, Marcie is slowly working her way under his skin. This woman has no place on the Squad. No place in his life. Passions burn as bright as the fires they fight...

But can their attraction survive constant doubts, a misunderstanding and the threat of a maniac arsonist bent on murdering them both? 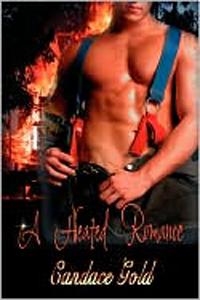 A fascinating romantic suspense, A Heated Romance tells the story of Marcie O'Dwyer, a female firefighter who has had to struggle to prove herself. Used to the chauvinistic comments made by some of her male coworkers, she is not surprised when a new transfer, Ray Smith seems to have a problem with a female firefighter. But even with his attitude, she can't help but find the man attractive.
Doubts, misunderstandings, and a serial arsonist plague the couple and try to keep them apart in this suspenseful tale.
This complex story is mostly told from the point of view of Marcie. One of the many fascinating characters of the story, Marcie is a tough heroine following in the footsteps of her father and grandfather as firefighter despite the misgivings of her family, friends, and others. I really enjoyed Marcie's wit and attitude.
A Heated Romance is a fascinating story.

Candace Gold spins an exciting tale of one woman's struggle for equality in what has traditionally been a man's world--firefighting. Is there romance? Oh yeah! Marcie O'Dwyer, though more concerned with career than passion, finds herself embroiled in a big time romance with the hunky, but mysterious, Ray Smith--who may or may not be a chauvinist.
Fast paced, riveting and exciting are only a few of the words that express this thriller. Combine a feisty, fearless female with a dozen or more reluctant male co-workers and mix in one co-worker who is reluctant at work but only too happy to be more than friends outside the job. Stir the ingredients until they come to a boil with a crazed arsonist and a mad stalker [who may or may not be one and the same] then simmer on the back burner with twists and turns galore.
Who can Marcie trust? Who is trying to kill her? With her life on the line, she strikes back, determined to find the killer before the killer finds her--unprotected and vulnerable.
A must read!

"O'Dwyer, you look different," Smith said, actually initiating a conversation with her.

"I left my helmet home."

"It's hard since I never leave home without my sarcastic wit. Besides, I never know what kind of mood you're going to be in."

"I just wanted to say I like what you've done with yourself."

She shrugged. He didn't have to know how hard she'd worked to get that way. "All I did was put on a dress and apply some makeup."

Like the excruciatingly shrill screech of chalk scratching a blackboard, he'd gone and pressed the wrong buttons, as usual, causing something to short-circuit in Marcie's head. Before she could stop herself, her eyes narrowed to slits and her nostrils flared with fury as she spewed, "I knew you'd say something sexist like that."

"Damn, O'Dwyer. That's not how I meant it," Smith replied angrily.

By this time, every eye at the table was watching, every ear listening, as though the two of them had forgotten where they were. Marcie ignored everyone and turned completely around in her chair to look him squarely in the eye. However she saw no defiance or anger. Instead she saw something she'd never seen in his eyes before. Had he actually been telling the truth? Could he be capable of giving a woman an honest compliment? She wasn't certain how to respond. For the sake of the others at the table, she chose to believe him and go from there.

"To tell the truth, Smith, I wasn't sure how you meant it. I mean, we're not on what you would call the best of terms."

"True. However we're at a wedding, O'Dwyer. Try to be civil."

"Civ" The nerve of that man. She was about to blow again when Smith placed a finger on her lips. Lucky for him, she didn't try to bite it off.