While struggling to keep her ranch, Dakota Wells turns away the two sexy, hard-as-nails cowboys who come looking for work. But they won't take no for an answer and convince her to hire them. Little does she know how hard and fast she'll fall for them.

Joe Taylor and Colt Mason have their own reasons for wanting to work at her ranch. The man causing their new employer trouble is the same man who ruined their lives years ago. Thoughts of revenge have kept them going and they won't let anyone get in their way.

Protecting Dakota is easy. Protecting their hearts from the little spitfire is a lot more difficult.

When Dakota learns of their plan, she knows she must stop them, even though dreaming of payback has driven them for years. Can she convince them to give it up for a chance at a future with her?

Heat Rating: Sextreme
Word Count: 39,774
428 Ratings (4.6)
Menage a Trois/Quatre Western/Cowboys
In Bookshelf
In Cart
In Wish List
Available formats
PDF
HTML
Mobi
ePub
Cover Art by Jinger Heaston
Buy Audio Book at:
Amazon | Audible
Reviews
Great book. Love the series.
rhondavb
this is a story of three lost soles that find each other and have to fight to keep what they want and to let go with what has cosummend them for wrongfull doing. I thought the story was full of details and very hot Keep up the good work
JJ
Read more...
Professional Reviews

4 CUPS: "I love Dakota. She is strong-willed and will stand up for herself and protect what is hers. I enjoyed the plot of this story and the interactions of all of the characters. Joe and Colt are fun and sexy and true to themselves. They all seem to belong together like puzzle pieces that fit. This is book 3 in the Dakota Heat series. I have not had the pleasure to read books 1 or 2 yet, but they are going on my "to read" list." -- Rypleigh, Coffee Time Romance & More
4 STARS: "Dakotas Cowboys is filled with suspense and hot ménage a trios sex. Colt and Joe are very much Alpha men and they aren't ashamed of it. Even though they don't know Dakota, they have no problem asserting their dominance over her in a good way. Dakota's character is so use to having to fend for herself, that at times she forgets what it is like to have a man protect her. The war of wills that these three have is very real and I actually enjoyed every minute of it. I also liked the bit of mystery that was a part of Colt and Joe because it works extremely well with the overall suspense of the story. The sex was very hot and the chemistry between the three plays a very big part in the hot orgasmic sex of the story. Overall, I think Dakotas Cowboys is a great story for anyone who enjoys a bit of suspense with great chemistry." -- LT Blue, Just Erotic Romance Reviews

4 HEARTS: "This one started with a bang and let the reader know right off the heroine was one who could and would take care of herself. I really liked how Dakota had to be tough to survive but she still knew how to be feminine when she needed to. Colt and Joe were great characters, trying to right a wrong done to them years ago. My heart broke for the pain they had endured and all they had lost. The plot was very believable and the book flowed smoothly from beginning to end. We even got a hot and sexy epilogue! The sex was, of course, extremely erotic and ultra sensual. You won't be disappointed with this one!" -- Lisa Freeman, The Romance Studio

4 ANGELS: "I really enjoyed this story. The love that grew between Dakota, Joe and Colt was a sight to behold. I really liked how protective the guys were of Dakota. Dakota was a heroine that was a joy to get to know. Leah Brooke has written another book that was well worth the read. I do want to note that although this is book three in the series, all of the stories I have read so far are stand-alone books." -- Nickie R., Fallen Angel Reviews

4 CHERRIES: "You want alpha heroes? Look no further than Joe and Colt. Whew! They might not want to act on their attraction to Dakota, but when they do, it’s hot. They have a secret agenda when they come to her ranch, but the appeal of Dakota has them coming back for more than maybe they can handle. The love scenes in this story sizzle. Even when they aren’t sure of each other—and they do jump into the sack a bit quick—you feel the building passion. From page one, you want them to find the love they feel for each other. If you want a steam, and I mean scorch the pages off the screen hot, then you need to read Dakota’s Cowboys." -- Tiger Lily, Whipped Cream Romance Reviews 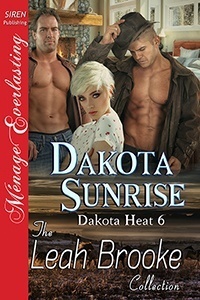 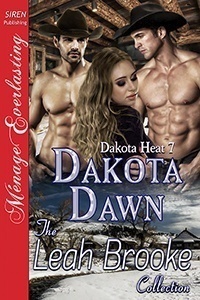 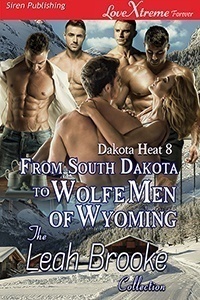 From South Dakota to Wolfe Men of Wyoming (LoveXtreme)
Leah Brooke
In Shelf
$8.99
All Books In Cart
All Books In Bookshelf
Excerpt

He lifted his head as he ran a hand over her belly. “Do you have any idea what we’re going to do to you?”

Joe tossed her panties aside and looked down at her slit hungrily.

Dakota parted her trembling thighs, gulping in air. “Do your worst.”

Joe’s eyes flared as he ripped off his t-shirt and lowered his head.

She cried out at the first touch of Joe’s mouth, gripping Colt’s shoulders as hot tingles radiated from her slit outward. Joe ate at her hungrily and she tightened her hold on Colt as her defenses crumbled all around her. Holding her buttocks in his hands, Joe lifted her to get better access and simply devoured her, robbing her of all reason.

Colt’s mouth moved over hers, brushing his lips against hers and down her jaw to her throat while his hand stayed busy on her breasts. Suddenly, a large swell of pleasure washed over her, stealing her breath as she arched, her body tight.

Joe held onto her, his mouth gentle as he brought her down so slowly she thought it would kill her.

“Damn, you’re beautiful,” Colt told her against her lips as he took them again.

Joe released her and she heard the sound of their duffle bag being unzipped and then the rip of foil. When Colt lifted his head, she looked down to see Joe rolling on a condom.

Joe’s jaw clenched as he ran his hands from her knees to her thighs. “I’ve never wanted a woman as much as I want you.”

Dakota lifting her hips in invitation. Her entire body had gone up in flames and she wanted more. Wanted it all. “Take me.”

Dakota turned her face to watch Joe’s eyes as he slowly began to enter her, so slowly she didn’t know if she would survive it. She struggled to accept him. His size and the fact that she had been celibate for some time made his possession deliciously snug. She lifted her hips higher, trying to take even more of his thick heat into her.

Joe brushed her hair back and tilted her face to his. “Easy, Dakota. I don’t want to hurt you.”

“Please. You’re killing me. More.” His thick length burned inside her, each bump and ridge of his cock delighting her.

“She’s so fucking tight,” he told Colt through clenched teeth. “Dakota, look at me, honey.”

Dakota lifted her gaze, rocking her hips to take even more. “God you feel so good. Stop treating me like a baby, damn it. Show me how much you want me.”

His eyes flared. A heartbeat later his lips covered hers again, taking her mouth with none of the finesse he’d used earlier. His strokes came faster now, each pressing more of his cock into her. He ended the kiss to stare down at her.

Her breath caught at the heat in his eyes. It erased any inhibitions she may have had. She couldn’t believe how good it felt, each stroke taking her higher and higher. Her body began tightening again and she thrashed on the pillow to fight it, not wanting the magnificent feeling to end. He relentlessly dug at a spot inside her that gave her no choice but to surrender.

Braced on his elbows above her, Joe kept his eyes on her the entire time. “Go over, Dakota. Don’t you dare fight it.”

He spoke through clenched teeth, and she could see he was barely hanging onto his own control. Leaning to one side, he slid a hand under her bottom and lifted her into his thrusts. “You’re so damned hot.”

Colt’s hand slid over her hip and thigh before he reached up to cover a breast, running a rough thumb over her nipple. “We won’t let you fight it, Dakota. You’re gonna come, honey. Let go. Let us make you feel good.”

Joe thrust to the hilt inside her and she couldn’t help but cry out at the pleasure. She tried to pump her hips but he held onto her, controlling her movements. Those little sparks got stronger and started to spread far too soon.

“No. Not yet.” She moaned, thrashing on the mattress. She dug her heels into his taut buttocks, lifting herself even more. “It’s too good.”

Dakota gripped him tighter as the wave of pleasure crested, washing over her so completely she felt it in her toes. Her body bucked and jolted helplessly as Joe thrust harder. She gloried in his possession, losing herself to the pleasure as his control finally snapped.

He covered her body with his, burying his face in her hair as he thrust, stroking his hot length deep inside her. Groaning, he slid his arms under her, pulling her even closer as he found his own release.

Colt’s hands ran over her, firm but gentle.

Running one hand over Joe’s back, she reached for Colt with the other one, gasping for air. “Why doesn’t it feel wrong to have Colt touch me while you’re still inside me?”

Joe lifted onto his elbows again and gave her one of those rare smiles. “Because he’s as crazy about you as I am.”