"You can take off the sunglasses, Val. It isn't all that bright."

Melynda Kerpanik dropped her head and sighed. She knew life with a vampire could have its fair share of challenges, but a lighted Christmas tree? It wasn't exactly the sun at mid-day on the summer solstice.

Valentine Drakul removed his dark glasses and attempted a smile. "You're right, Mel. It's a beautiful tree, and you've done a great job decorating it."

He turned his attention back to the article he was reading in a top flight glossy magazine, featuring his award-winning night photography. His relaxed posture on the leather sofa indicated to her he didn't find her attempts at bringing a bit of traditional holiday cheer into their home's modernistic décor overly exciting--or necessary for that matter.

"I went to a lot of trouble to find some of these Classic Horror Movies of Hollywood ornaments online and in resale shops. I thought you'd like the Dracula and Bride of Dracula ones in particular."

She reached out to the closest ornament and twirled Casper the Friendly Ghost in her hand. "I wish I'd gotten the Star Trek ones I liked now. I spotted a few from the original series and The Next Generation in a Goodwill in South County, but I was saving my pennies to make our first Christmas together memorable."

"You are. Don't sweat it." His gaze was still focused on the magazine.

Mel bit her tongue to keep from screaming at her lover, It's all about you sometimes! Your career, your artistic endeavors on film, but not about my vain attempts to make a "normal" existence for us as a couple.

She threw up her hands instead and stormed out of the living area and into the kitchen. Perhaps making some of her mom's famous peppermint candy cane cookies would cheer her up? It wouldn't do wonders for her already curvaceous figure, but at least it would distract her from an unpleasant thought niggling in the back of her mind lately. She took a mixing bowl from the cabinet and concentrated on searching for the ingredients, but the thought wouldn't go away.

Vlad and others warned me this human/vampire thing is notorious for not working out in the long run. The vampire eventually bores of his mortal lover, and the human has to decide whether to become immortal like him or move on with her life in the everyday world. So, where do I fit into this one-plus-one equals eternal happiness in the realm of the undead?

"Don't go there," she muttered to herself as she measured out the flour and other dry ingredients into the bowl. "It's one day at a time, Melynda, or rather one night at a time. You're an adult. You knew what you were getting yourself into when you decided to hook up with Mr. Sexy Fangs and become his live-in, night owl lover."

Sighing, she measured the liquid ingredients, then dumped them all in with a splash and vigorously mixed the batter with a wooden spoon. "No one mesmerized you and forced you to have wild, fantastically inventive sex on a nightly basis with that gorgeous hunk of a male in the other room. That was your decision."

Decision. Mel paused in her baking routine and put the mixing bowl down on the counter. On second thought, she had been mesmerized--but it hadn't been Val's doing. Val had heroically saved her from the psychopathic psychic-vampire-killer Van Helsing. She owed Val her life--literally her life--for all he'd done to protect her and continued to do for her. He allowed her the freedom to start her own interior design company and paint whatever she felt like even if it didn't sell. She freely gave of herself to him out of gratitude and genuine devotion.

Why all of a sudden did she want a "normal" relationship? Become Betty Crocker and Martha Stewart on steroids all rolled into one? It wasn't like her to cherish the familiar, the safe and uninspired. She had a wild artistic streak in her wider than the white stripe in her long black hair. Why the need to play boring Mike and Carol Brady during the holidays? Maybe it was just because of the holidays expectations of how she should act?

Or maybe it was because Val had acted out of sorts since they began?

A knock on the door brought her out of her puzzling reverie. The familiar voices of her cousin Shelby and Shel's lover, the time agent and all-around hotty Quentin, brought a smile to her face. She rushed back into the living room.

"Well, howdy strangers! It's great to know you're still with us. How goes adventuring into the future? Or was it the past this time?"

"A little of both." Shelby gave her a wink, then stood on tiptoe to hug her taller cousin and kiss her cheek. "How goes it for you, oh, mistress of the night and sex goddess extraordinaire?"

Mel blushed at the remembrance of their group encounter not so long ago. "It goes, it goes. I must admit, I do miss having you around in St. Louis on a regular basis. But from the gleam in your blue eyes, I can see time travel agrees with you." She squeezed her petite blonde cousin in return, not wanting to let go. "It's so good to see you."

"It's good to be home. At least for a…time." Shelby pulled back slightly. She sighed and lowered her voice. "Sometimes you just gotta sleep in your own bed--and I mean sleep sleep. Keeping up with a sexually insatiable time agent is exhausting work."

They exchanged knowing looks. "Gotcha. Besides, you've got to check in with Sara at the office now and then, don't you? Although, it's thriving with no interference whatsoever from the owner I hear. Am I right?" 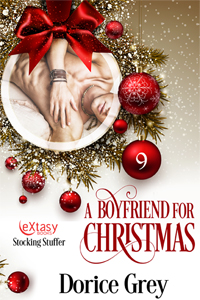 A Boyfriend for Christmas
Dorice Grey
In Shelf
$1.99

A Puppy For Christmas
Matthew Angelo
In Shelf
$1.59

In Exchange For Freedom
Kat Barrett
In Shelf
$3.99
Tweets by
sirenbookstrand