Finding a date was never more hellish. When Jordan Hudson borrowed his friend's "A Dummy's Guide to Demon Summoning" and called up a succubus, he found that making love to a minion of Hell proved to be more than a one night stand. 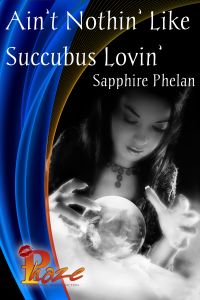 Getting back into the dating groove nowadays was harder than Jordan Hudson expected. A forty-something, newly divorced male—nothing special, just an ordinary man—he’d trolled the singles bars and even the supermarket. After a year of it, he just finally gave up. Women today—at least the ones he met—either wanted to get married or preferred the bad boy types. Nice guys finished last, and he never even got sex as a consolation prize for all his efforts. He’d become tired of using his hand, the only kind of sex he had for the past two years.

He decided instead to be shallow just like those bad boys, and have a good time, with plenty of sex in the bargain. So he decided to take the easy way out and summoned up a demon—to be more precise, a succubus. After all, what better demon to call up than an expert in sex, especially when the man doing the summoning hadn’t had it for two years?

After borrowing A Dummy’s Guide to Demon Summoning from his friend Micah, he bought what was required. He also hoped to succeed where Micah failed.

That night he went over everything.

Chapter One: How to Summon a Succubus.
Ingredients: four black candles….

Jordan dug through the large Wal-Mart bag beside him and, after a few seconds of searching, found the chalk.

Blood of a live chicken.

Jordan shot a dubious look at a very bloody package of refrigerated cut-up chicken parts he’d bought from the supermarket just up the street from his apartment. All he needed was the blood. Besides, he could use the chicken for one of his dinners later in the week. Waste not, want not, as his grandmother used to say, and Jordan didn’t believe in wasting anything. Another facet of his personality that had driven his ex crazy.

Everything done, he made sure that the chalked circle was perfect. Even one minuscule break in it would allow the demon to sneak out. He lit the four candles and placed each one outside of the circle: north, south, west and east. A cloud of minty menthol wafted from a wooden bowl nearby, drifting over Jordan and smoking up the living room. He shrugged. If nothing else resulted from this little experiment, at least his congestion would be alleviated.

Satisfied, he slipped off his jeans and T-shirt, flinging them on the couch nearby.

Ripping open the package of chicken parts, he poured the blood into a cup and shoved the chicken into the freezer. He chanted off-key, sprinkling the chicken blood over the circle while doing a little half-skip, half-stomp all around it. When he stopped chanting, he sat Indian-style and waited. His cock hardened in anticipation of the succubus’ appearance. Hopefully, otherwise, he’d stained his carpet for nothing.

A minute passed, then another, then six. Except for Jordan’s breathing, silence filled the room.

He flung the book. It smacked the nearby wall and fell face up onto the carpet. His hard-on wilted in disappointment.

The room’s temperature dropped suddenly. Goosebumps bubbled all over his naked body.

Damn heat must be broke again. Might as well get dressed.

A thundering boom, followed by a flash of brilliant light, filled the living room. A tall, lithe, and very inhuman form now stood within the confines of the circle. Jordan scuttled backwards across the rug in fright. His gaze flitted between the chalk circle and the demon. Would a simple line of calcite really keep this thing caged? Slowly, he climbed to his feet, not wanting to startle the succubus into doing anything…painful.

That demon had skin the color of green grass, blood-red eyes with no pupils, and obsidian horns that curved out of long black hair that flowed down from her head and streamed past the shoulders to the small of her back. She also had breasts. Boy, did she have breasts! Her full, soft breasts had him panting to cup them with his hands. Their green color and black as sin nipples were a bit of a turn-off, but he could overcome that. His cock perked up.

His gaze left the breasts and traveled all the way down to the nest of pubic curls at the apex between her thighs. Like a blackbird’s feathers, they looked soft to the touch, too.

Thank goodness he hadn’t fucked up and summoned an incubus. Though some men might not mind, he preferred women. Though what stood before him might not be classified as a woman—well, a human one anyway.

Losers can’t be choosers, Jordan Hudson. It came to your call, so you got to get up the gumption or…

The demon turned her gaze on him and, narrowing her eyes, slowly looked him up and down. By the odd expression in her face, she found him wanting, too.

“Are you the one who summoned me?” She had an accent, maybe Norwegian or Swedish, he couldn’t be sure.

Jordan tried to smile and failed. “Yeah, I’m the one who summoned you.” He bent over and scooped up the book that lay next to the wall. “Though to tell you the truth, I never really thought that you would, ah…make an appearance. Frankly, I wasn’t sure if it wasn’t some kind of malarkey. The friend I borrowed this book from has a history of that.”

The demon took a couple steps forward. Jordan jumped back to maintain a comfortable distance between them. She screamed as the tips of her clawed feet touched the chalked circle. Stinking black smoke rose along with a sound like sizzling bacon.

She leapt back and struck a macabre pose, hands on hips, one leg canted forward like a super model on the catwalk.

Her hand slid down to fondle one of her breasts. She moaned, rolling the nipple between a clawed thumb and finger. Jordan’s cock hardened even further. Maybe he could get past the green skin, claws, and red eyes. Like Micah said, with the lights off, all cats looked the same in the dark.

Of course, Micah hadn’t scored in a year.

The demon worked her breast, pinching it hard. Her moans grew louder, more guttural. Her breathing labored, and Jordan swore he saw flames crackling in her eyes. She screamed and shuddered. She dipped her clawed fingers between her legs. They came back wet. The pungent aroma of sex filled the air. She looked at Jordan as she slowly brought her digits to her mouth and licked them clean.

She smiled at him. “Mmmmm. Now that I got myself some momentary relief, let’s get down to business. I’m assuming you called me up for something sexual—unless you’re gay. I am a succubus, as you humans call us.” Her gaze zoomed in on his arousal, and her smile widened. “No, I don’t think you’re gay at all.” 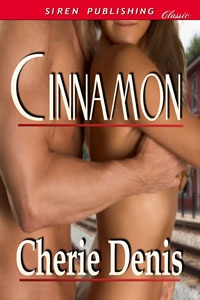