Alice Totti, frowned-upon daughter of the stuffy Lord and Lady Totti, is a young lady hiding in her books and art when she is whisked off by an insane mechanical centipede to Wonderland. There she finds a land being ripped apart by oppression and mechanization, coordinated by the tyrannical Queen of Hearts and her mysterious ally, the Bush. 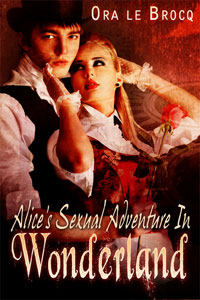 "How curious," thought Alice. "I wonder if I'm now two dimensional to anyone who looks at me from the outside?" She would have looked back, but her attention was taken by the focal point of the picture--the splendid, naked back of Patroclus, who was slowly turning round to see who had entered his picture.

Alice watched, entranced as Patroclus' face came slowly into view. His hair was thick, dark and wild, his brow large and clear, while underneath, a pair of soft, dark brown eyes looked quizzically at Alice. His full red lips, made redder by the pallor of his soft skin, contracted slightly in puzzlement, pulling the Cupid's bow into a more rounded position.

"Don't get up," squeaked Alice as Patroclus began to rise, conscious that he was totally naked. Her words had no effect and despite her best efforts, her gaze fell to his naked body. Alice felt her throat tremble with an unknown emotion as she looked at the tall, broad man in front of her.

The chest was herculean, the arms long, strong and well-muscled, the hips slender and leading down to well-proportioned legs that flexed with energy and muscles. Despite her continued best efforts, Alice's gaze could not help but be pulled back to Patroclus' lower torso, which was behaving most strangely. As she watched, the small pink bud there stirred rather like a mouse sniffing the air, and then, very unlike a mouse indeed, it began to grow, stretching out and engorging, getting longer and thicker until Alice could scarcely believe that it was physically possible for it to get any bigger and she wondered what was causing the amazing and rapid growth.

The answer to that, of course, lay in what Patroclus could see and perhaps now is as good a time as any to describe Alice. Many laud the virtues of the English Rose--the cool exterior, the placid temperament, the clothing carefully selected to neither excite gossip nor inflame opinion and as such, Alice, with her slender figure, blonde hair brushed back in a simple wave, long skirt, blouse and large hat, fitted the classification well.

A closer look, however, may well have caused some disquiet. Alice's clothes, though neat and unexciting, strained at times against her long legs, slender hips and the bust that continually threatened to spring forth from the tight corset underneath. Her hair was actually held in place with numerous pins acting as an anchor against the unruly thatch, which continually tried to unwind like some mad Shakespearian heroine. Most alarming of all for any right-thinking individual was the hint of independence that lurked deep within the eyes that sometimes seemed blue and sometimes seemed green and which always looked with great innocence upon life. Until now.

Alice gazed at Patroclus' body and midsection and thought, somewhat incoherently, that snakes seemed to be a major part of her day thus far. She gulped in some air and succeeded in also breathing in the masculine essence that surrounded the nude hero. Her hair began to spring up and uncoil from around her head as Patroclus smiled--a warm, open smile that transfixed Alice with its lasciviousness.

"Oh, gosh," she said faintly as she felt an unexpected warmth build up between her thighs. Patroclus pulled her toward him and kissed her softly on the lips. Alice felt a shock that was almost electric run through her body as Patroclus ran his hands up and down her back. "It can't be bad," she thought. "He's only a painting. Just like those photographs earlier." Alice recalled what the lady had been doing to the man in the one photograph. "I must remember my duty and act in a way to please him," she decided. She further decided the best way to please him was to do what the lady in the photograph had been doing and accordingly she slid down to her knees.

Patroclus gasped in delight as Alice opened her mouth and slid her soft lips over his bulging cock. She moaned in guilty pleasure as the hard, round head slid into her mouth and rested on her tongue, the taste of masculinity exploding like fireworks. The cock grew even thicker and longer, gently forcing her lower jaw down as she struggled to accommodate the muscle that was flexing and straining. Alice sucked, gently as first, but then with increasing vigour as Patroclus squirmed in delight.

He took hold of her head and held it lightly between his hands, helping Alice to establish a rhythm as he guided her back and forth along the shaft. Her lips moulded themselves to accommodate the thick rod, her mouth drooling excessively in enjoyment and lubricating her lips and the hard cock, making it slippery and allowing Alice to increase the tempo. 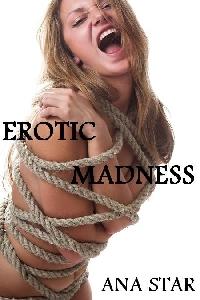 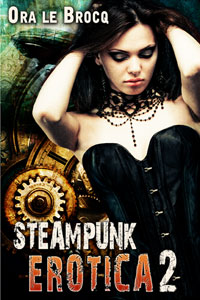 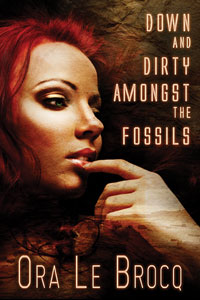 Down and Dirty Amongst the Fossils
Ora Le Brocq
In Shelf
$3.99
Tweets by
sirenbookstrand