And to All a Good Night

Two lonely men face a grim Christmas Eve. Bart is recently divorced and Larry is broke and homeless. When Bart encounters Larry huddled on the steps of his apartment building during a fierce snow storm, he takes the young man in—just for the night. As the two men decorate a Christmas tree, hoping to ward off their loneliness, they begin to bond. An accidental touch while placing a shining star atop the tree ignites a night of passion and leads to the hope of happier times as the New Year approaches. 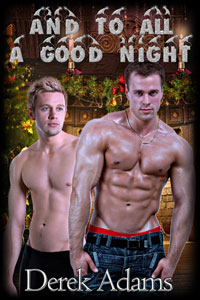 And to All a Good Night

“Why don’t you go and get comfortable, Bart, then we’ll start working on this tree.” Larry pulled the robe slowly around his middle and tied a knot in the belt. His cheeks were flushed and his lips were full and red as holly berries.

“Huh?” Bart felt confused and unsettled by Larry’s presence. He was also slightly alarmed by the little flicker of lust deep in his belly that was beginning to make his prick tingle.

“You can’t decorate a tree at this hour of the night unless you’re in your bathrobe. That way if Santa gets here early, we can pretend to be asleep. Right?” Larry grinned happily, his voice husky with excitement. “We’ve got some decorating to do, Bart!”

“Uh…right.” Bart padded obediently down the hall, grabbed his robe off the hook in the bathroom and slipped into his bedroom. He stripped quickly and pulled on the robe. He caught a glimpse of himself in the mirror and saw that his prick was just about as long as it could get before it started pointing up into the air. “Don’t think about things like that,” he mumbled to his reflection as he pulled his robe together and belted it tightly.

He stopped off at the hall closet and poked around on the top shelf till he found the Christmas ornaments and lights. “Well, this is it,” he announced a moment later as he dumped the boxes in a heap around the base of the tree. “Let’s see what we can do with this baby.”

They both threw themselves into decorating the tree. Bart turned on an all-night FM station that was playing carols and they started untangling the strings of lights. After the first few minutes they got over their nervousness with each other and began laughing and talking. As the tree began to glow and shimmer, their buoyant mood intensified. They began reminiscing about past Christmases, trading stories like they’d known each other for years.

“This is it, Bart.” Larry had been rummaging in a box. He stood and held his prize high above his head. “It’s time for the star to go on the top.”

“Just hoist me up, Bart.” Larry looked at him appraisingly. “You look like you’re built for some pretty heavy lifting. Besides, I don’t weigh that much.”

“Guess we’ll have to see about that.” Bart gestured for Larry to turn around. The young man did as he asked.

Bart grabbed Larry around the waist and hoisted him up. Larry leaned forward and stretched out his arms, reaching for the top branch of the tree. His feet were warm where they were braced for balance against Bart’s thighs. The young man’s waist was trim and solid beneath his hands.

As Bart slowly let him down, Larry’s robe slipped up, and Bart could feel the young blond’s bare ass press against his chest and belly. Larry made no attempt to move once his feet were back on the floor, and the contact between the men remained unbroken.

Bart hardly dared to breathe. His hands were still clamped around Larry’s waist and he could feel the young man’s soft curls tickling his nose. Bart’s prick stiffened at the continued contact of flesh on flesh. Larry slowly turned around, his body pressed tight against Bart, chest to knees. “It’s beautiful,” he whispered, his breath warm against the older man’s muscular chest.

Almost against his will, Bart lowered his head and pressed his mouth tight against the soft lips of the handsome young man he had invited into his home. Larry’s prick jabbed against his lower belly, already leaking warm, sticky juice. His own cock was rock hard by this time, wedged tight between Larry’s long legs, the broad veiny back of it rubbing against Larry’s balls. Larry reached down and pulled both their cocks up till they nestled side by side between their taut bellies. Then he began humping Bart, moving slow and easy. His lips sought out Bart’s thick nipples, teasing the spongy flesh into hard points.