Putting the muscle into marriage.

Morrie is about to marry his boyfriend of three years although his friends don’t think Chet is good enough for him and organize one last ditch attempt to split up the monogamous couple. What better way to do it that aim for Morrie’s one weak point – his love of muscle men. So they hire the sexiest muscle stripper for his bachelor party and then sit back to watch the fireworks when Morrie can’t resist a little extra-curricular activity. 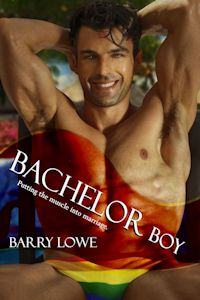 If you like stories with lots of humor and a good number of raunchy bedroom encounters, if you enjoy a story with a twist or two and some nasty secondary characters you're ready to strangle after the first few pages, and if you’re looking to be surprised, maybe even stunned, up until the very last page, you will probably like this novella. I certainly laughed my head off, and enjoyed the subtle way Barry Lowe made me look at fidelity in a somewhat surprising and new way.

My best friend, Tristan, insisted we just had to have separate bachelor parties; the Chet suggested communal bash was ‘so not done.’ Tristan had a tendency to add superfluous words to his sentences, speaking with a tone and inflection as if what he said was a decree from a higher authority. Unfortunately, Tristan and his best buddy, Piers, thought of themselves as that higher authority; there was no further appeal to an even higher arbiter. They had enough good taste, style, and wit that there was no room for disagreement. Very early on they’d decided it was their duty as my nearest and dearest to take responsibility for our nuptials. There was no point arguing, they always got their way, so, apart from mild disagreement over napkin colors, invitation fonts and some minor discord over the invitation list, everything followed their grand plan . Chet and I wanted intimate, they wanted a Steven Spielberg epic.

“You can’t just sneak away and get married,” Piers lectured. “You have to make a bold statement. Your wedding is one in the eye for social conservatives who used to say gay men can’t have long-term relationships.”

“You make us sound like the rental on a holiday cottage,” Chet groaned as he put a line through more than half the names on the invite list. “I don’t even know most of these people. Gwyneth Paltrow? Are you serious?”

The biggest bugbear to the arrangements was that Chet loathed Tristan and Piers. For more than three years he’d loathed them and the feeling, which originated on their side, was mutual.

“I don’t trust them,” I said when we were alone. “They’ve been trying to split us up since before we met.”

“Apart from that little blip in our first year when you didn’t totally trust me, we’ve been fine. They’re harmless,” he said while knowing full well it was a lie.

“At least their machinations taught me to trust you.”

“See,” he said, and kissed my nose for taking the high road.

I still couldn’t believe it. I was getting married. To a man. I loved him dearly, more than life itself. Well…I wasn’t totally sure that if push came to shove I would do the manly Charlton Heston thing and plunge to my death in a heroic but ill-judged attempt to save him like Chuck did Ava Gardner when she was swept away to almost certain death in Earthquake. I was pretty sure I would do just about anything short of sacrificing myself for Chet. I was also pretty confident he would do as much for me.

Why wouldn’t we? We’d been contentedly in love for longer than anyone had ever given us credit for, and he was still the same beautiful man I’d met when he was twenty-seven. Well, maybe his face was craggier, and the muscle mass of his body had plummeted from his impressive chest to settle somewhere around his thickening waist…

We met at one of those parties you go along to expecting little because life seems to have kicked you in the cobblers, you know what I mean? Back then I was wrapped in existential angst at the ripe old age of twenty-three. I was burned out (so I believed), my love life a series of tattered relationships that unthreaded even faster than a knitted cardigan caught on a nail, especially since I was an avid believer in that old love-at-first-sight adage. I think it was mainly my cock talking rather than my heart.