Mikhail Romanasky has the gift of second sight. When her latest vision is of a kidnapped child, she reluctantly approaches the Chicago Police Force, endeavoring to prevent the crime.

Detective Jensen Palmer doesn't believe in the ability to foretell the future. But when his nephew is targeted, he is forced to trust his only source of information, the ever-so-attractive Amazing Mikhail. To do his job, his has to believe in the impossible.

Will they find love along the way? 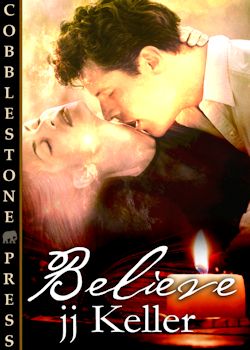 Mikhail reached over to shut off the alarm. Why did it continue to ring? Blast, the telephone rang. She lifted the receiver, paused, and considered dropping it back onto the cradle. Instead she held it against her ear.

“Mikhail?” The deep huskiness and seductiveness of his voice created a tingling within her. An itch that grew until she pulled her legs up to her chest. She deliberately kept desire, the need for a man; so far recessed she’d believed it would never surface again. Ever feel it again. Yet, the ache taunted her.

She desired this controversial man, no less. A man she admired because of his quick mind and his love for his family and disliked at the same time. Damn stubborn nonbeliever.

She shook her head, desire for a man who spouted unsavory thoughts when least expected.

Immediately awake, she turned the alarm clock toward her and flounced back onto the fluffy Egyptian white cotton-covered pillows. The clean linen scent wafted up to her nostrils. “Yes, Mr. Palmer, what can I possibly do to help you, at the unlikely hour of 6 AM on my only day off this week?”

“I know it’s early, and I apologize, but another kid has been snatched. Same MO. The description of the kidnapper matched what you provided. I’m on my way to pick you up. Be ready in twenty minutes.”

“You do know I was at the station giving my description to Mig and going through photographic tombs of disgusting men until midnight?”

“Nice guy, Mig. Be ready in twenty minutes.” His voice, as cold as the early winter frost on her windows, didn’t warm at her announcement.

Despite his superior, annoying attitude, her sex drive had reawakened. Mikhail partially blamed Netzach, the angelic watcher who had visited her, for this reawakening. His honest and pure love for his soul mate, Emily, had motivated Mikhail to trust men again, dead and alive.

Showered, primped and with a cup of coffee in hand, Mikhail waited downstairs in the Victorian reception area of her business. Her gaze wandered over the timeless treasures she held in her possession. They had been passed down from seer to seer. The next generation, the next prophet would hold the crystal ball, tarot cards, rune stones, and oracle aids ordained to him or her.

She’d found living above her business convenient, a few steps down the stairs instead of an hour in heavy traffic to reach Chicago. Sometimes it was inconvenient when people couldn’t separate her personal space from her business.

Mikhail had settled into a large paisley, gold and green, fabric-covered chair and stroked her calico cat, Aphrodite. Steam visibly rose from the delicate china cup, and the bit of humidity stuck to her nose. The smell of the coffee permeated the room and tantalized her senses.

The door opened, and Jensen stood planted on the threshold. She raised her gaze to meet his. Expecting him didn’t stop the sudden rush of nervousness or the excitement spreading through her lower region.

She wanted to appear non-threatening, so she put on jeans, a crisp white cotton oxford shirt, and a dark blue blazer. Would the serene picture she tried to present make him trust her, at least a little?

“I know I should’ve knocked, but you looked so peaceful. A portrait. We’ll call it ‘woman on paisley as she stroked a cat’.”

The challenging glint in his eyes warned her that he wasn’t sorry for his unannounced entrance. In her vivid imagination, he walked over, removed the cup from her hand, put the cat on the floor, and forcefully hauled her into his arms. He would kiss her until she begged him to take her, right here, right now. How would it feel to have him enter her, fill her with his firm muscle. She smiled slightly and wondered if she could provoke this fantasy.