Bethany Court has been brought up by a strict moralistic code, which shatters when her long-standing boyfriend deserts her. Emotional turmoil awakens hidden desires, fired by a book in the town library where she works. It’s claimed that one of Griffin Bay’s most respected ladies was the head of a secret society – the Sisterhood of Sin. Images from the book, of corporal punishment games, release Bethany’s own repressed sexuality. When its author, the mysterious Marcus Quill, visits for a signing and tells her the Sisterhood may still exist, Bethany determines to find the truth of it. Along the way she will draw the staff of the library, among others, into her quest – and may end up as Griffin Bay’s new Queen of Sin. 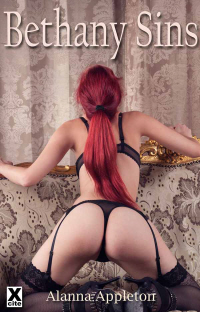 The chamber flowed with shadow, leaping and capering in the light of burning, wall-mounted braziers and lit candles. The sconces were set into ancient stone pillars that supported the low ceiling of the large, circular room, the crumbling brickwork warmed by soft, buttery light. A curtain over one of two entranceways was pulled closed. It had just gone midnight and the punishment was about to begin.

Within the circle there was a second circle, this one formed by standing, black hooded and cloaked figures, seven in all. It was midnight and the gathering was well under way. Cards had been drawn, and one cloaked figure stepped into the centre of the circle to stand next to a wooden vaulting horse, purpose built with legs at one corner much shorter than the other, lending a dramatic dip to the horse. The surface was well padded, and leather straps hung from the four legs.

The seven figures all wore bird masks; sharp, cruel beaks pushed out from under the hoods, shapes and colours differentiated between the anonymous figures, and cold, merciless button eyes suggested carrion waiting for helpless prey.

The figure in the centre of the circle removed her bird mask and flipped back her hood, to reveal a glossy fall of raven black hair, large, dark eyes, and trembling lips. She paused, taking a moment to look around at the others. Then she unfastened a button at the top of the cloak and shrugged it free. It fell with a slow, heavy swirl to pool around her ankles.

The woman stood naked before them, broad-hipped and full-breasted, her skin glowing like alabaster in the flickering light. Wearing only black lace-up boots, she rotated slowly, displaying herself to the entire gathering: pink-tipped breasts thrust proudly towards her audience; candlelight made a shadowy concave from her flat belly to the juncture of her thighs and the soft folds of her sex; the long sweep of her back, the strong, shapely legs, and the swell of perfectly rounded and thrusting buttocks elicited muted gasps of appreciation, and of anticipation.

The card that decided the instrument of her punishment she had drawn herself, as was custom, and the chosen punisher stepped forward now with a wicked looking rattan cane. The cloak was removed by two others and the punisher was revealed as a willowy ash blonde with opaque eyes that seemed almost colourless behind a crow mask. Naked now but for thigh-length black boots, her body moved like another glowing flame in the shadowy chamber. She held herself erect, her slender back straight and her head tilted up, the opaque eyes looking down an aquiline, patrician nose, imparting an impression of imperious superiority.

Crow Lady took hold of the victim’s shoulder and urged her down over the raised end of the vaulting horse. The woman’s outstretched wrists were secured to the lower end with straps, and straps were also fastened around her thighs, imprisoning the soft flesh and holding her legs apart. In this manner were her buttocks and private parts presented to the company, all of whom had now gathered behind her, the circle broken to better observe the punishment.

They all stood well back to gain the best view of proceedings and also to allow Crow Lady room to swing the cane, which she did.

The length of whippy rattan lashed down across the naked buttocks with an audible crack!

The woman jerked violently against the horse at the impact and sucked in breath. A crimson line instantly sprang up against the soft pinkness of her bottom.

After a second’s pause while she absorbed the stroke, the victim gasped out a single word. ‘One!’

Another card had decreed the number of strokes – 13 in all. The woman braced herself, and a moment later the cane whipped across the lower part of her bottom.

The third was delayed a moment as Crow Lady picked her target area more carefully. The air in the chamber was close, and already perspiration dripped between her breasts and glistened between her naked thighs. Boot heels clattered on the stone floor as she took a quick step forward and swung the cane, breasts swaying with the motion, and laid a stripe directly across the crease where buttocks met with thigh flesh. The victim cried out this time, and her body leapt against the restraining straps.

‘I didn’t hear that,’ Crow Lady told her, tapping at the naked, striped buttocks with the cane.

In full view of the watching hooded figures Crow Lady resumed the punishment, laying stripe upon stripe across the upper thighs and the writhing, churning arse cheeks. The raven-haired victim cried out, howled and gasped in pain, her frantic gyrations revealing intimate parts of her: buttocks lifted and parted and thighs bucked against the imprisoning straps, exposing pussy and anus for seconds at a time.

The audience watched, enthralled, the bird masks lending them a look of merciless cruelty.

The victim was sobbing now, her swollen arse cheeks and thighs a mass of raw welts that stood out starkly against the remaining areas of white skin.

Crow Lady stepped away, the length of her slender, naked body glistening with sweat. ‘You may rise,’ she said as two others undid the straps.

The woman eased herself off the table, her face flushed and wet with tears. She stood with her back to the gathering, showing her striped thighs and bottom to the five still-hooded figures. Soon they would take her upstairs and tend to her, but this moment was for display.

What was curious was that, despite her tears of pain, the woman bestowed a tremulous smile on her abuser and her eyes glittered darkly with gratified pleasure.

At a word of command from Crow Lady, the five dropped their hooded cloaks and stood naked in the capering light, dressed only in lace-up boots. They were all women.

Crow Lady turned slowly towards the curtained entranceway and smiled. She flung out an arm, the long, elegant fingers extended in welcome.

‘She has come,’ she informed the company. Then, to the one who stood motionless behind the curtain, she said, ‘Please, join us now.’

The curtain parted and the figure revealed there brought sighs and gasps of wonder and appreciation from the women.

‘Behold our goddess – the Queen of Sin.’