Better Than Another Man

Better than Another Man is a love story between two best friends, Bryan and Carey. Bryan is straight and Carey is gay, but they stand by each other through the milestones of their lives, including Carey’s coming out.

But when a family tragedy strikes, Bryan turns to Carey for support, and their relationship moves in an unexpected direction.

Can a straight man and a gay man enter into an intimate relationship, or will it destroy their friendship forever?

Who knows Better Than Another Man…

Warning: this is a love story meaning that while there is love, there is not a romantic ending. 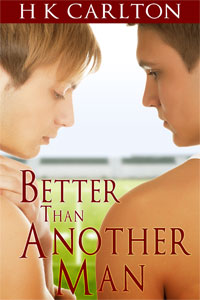 Better Than Another Man

I shot Carey a text every half hour and every time he responded, I sighed with relief. I called him once before I went to bed, pretending I was asking for homework help. By the time I showed up to pick him up for school the next morning, I was a nervous wreck. When he opened the door with his backpack slung over his shoulder and a chocolate Pop-tart hanging out of his mouth like nothing had ever happened, I felt the tension that had been weighing down on me for a week roll away.

A couple weeks later after his cuts had healed, I stood by his side when he told his mom, who likewise was not completely surprised by the admission but was confused by my presence and perhaps jumped to the wrong conclusion that I was there as his boyfriend and not just to support my friend in the biggest moment of his life so far. We reassured his mom that we were just friends but I still don’t think she believed us. I told her I’d be so lucky to find a guy like Carey, if I were gay too.

Telling his dad was another story. The fucker just got up from his worn out Lazyboy and walked away without a word.

Carey shrugged his shoulders. “He’s not shocked either. I think he’s always known. It’s why he’s forever disappointed in me. He wanted a jock like you for a son.”

“I know!” Carey grinned. He’d changed since he’d confided in me, easing the burden that he’d carried with him all this time. He was still struggling, but it was getting better.

We attempted to keep Carey’s secret from the rest of the school. It was a decision we made together. I revealed my fears about his coming out. I was afraid for his safety. We’d both heard the slurs and tasteless jokes in the locker room about homosexuals. Hell, I’d told a few myself. As far as we knew, there were no other openly gay kids at our small-town intolerant high school. There were some kids that we suspected might be, but it wasn’t until we went off to college in a bigger city that Carey was finally free to be himself and met other guys he could connect with. He even dragged me to a couple of gay bars as his wing-man a time or two in the beginning. I was a little uncomfortable, but I was also kind of glad that I could check these guys out. I didn’t want him going out with some flamboyant kind of guy or one that was just going to use him, or abuse him or whatever. I was always grateful that Carey was still masculine. I’m not sure I would have been able to remain his friend if he’d been too out there.

We sat playing video games in our dorm room apartment on a slow Saturday night, about six beers in each of us, and we let loose as always, joking and insulting each other as we did. But it was also when we had some of our best conversations.

Carey turned to me and set the game paddle down. “Bryan.”

“I know. I gotta say something.”

“So say it. I’m going on without you…Whoa!” I thumbed the control, zagging out of the way of a stray bullet.

“You know, I don’t think I ever thanked you. You know, for still being my friend, after…”

“I know. You don’t have to thank me,” I acknowledged, distracted by the game.

“It’s not just that you remained my friend, you saved my life…Bry!” He grabbed my shoulder.

“What?” I complained, getting aggravated by his incessant chatter. I didn’t even want to think about that day. “Fuck, man, you’re turning into a girl.” I always teased him that way.

Carey pursed his lips, clearly not appreciating my joke. He threw himself back onto the couch, picked up the joystick and hit reset.

“I’m gonna go out with that guy that I met at the bar.”

I nodded. “Okay, he seemed like an alright guy.”

“You’re okay with that?”

“It’s none of my business. If that’s what makes you happy?” I shrugged.

“You’d be okay about me, ya know, bringing other guys…here?”

Carey sat back on the couch. “Okay.” He nodded as if he’d made a decision.

It wasn’t easy for either of us. Guys are dicks, let’s face it—gay or straight, we are a selfish breed. Carey went through a string of men who either used him or walked all over him. I hated that people felt the need to treat other human beings that way. But male or female, people just generally sucked, I accepted that. And just like back in kindergarten, when they hurt him, I wanted to beat the supreme shit out of them. However, at times I had to let Carey fend for himself. I guess it was no different for him when I went through girl after girl. The difference was, I didn’t care if they stayed or not. There was always someone else. They were easy to replace. But not for Carey. He always took it hard. He wanted a relationship. A real, loving, give-and-take monogamous mate. And I really hoped, for his sake, one day he’d find it.