Beyond the Beaded Curtain (MM)

A Gay Male Anthology of Firsts

What gay male can ever forget his first full-blown sexual experience, which can be a particularly memorable first time given the conventions of society? It can be the culmination of long-held frustration, or it can be casual and come as a complete surprise. It can be traumatic, or it can have been sought. It can be imprisoning or releasing, disappointing or far beyond the wildest dream. It can be prearranged or ritualistic, or it can be spontaneous and unexpected by both parties. The experience can be instigated by a predator, a new lover, or a savior, or it can have been initiated by the first timer himself. The situation and venue can be sordid; or off-the-cuff convenient; or involve silken sheets, candles, champagne, and prolonged seduction and foreplay. But for most men, the one thing it cannot be is forgotten.

This anthology provides a treasure trove of thirty-six short stories of separate, varied “first time” gay male experiences, from the stalked to long anticipated, from the romantic to the brutal, for the young or not so young. The one central theme of all of these stories, however, is that the experiences depicted all result in the beginning of a new lifestyle, not the ending of a world.

This is an expanded relaunch of the eXcessica habu anthology, Across the Threshold.

“Reading this anthology was an experience I found oddly addictive. Even though it is a relatively long book, like chocolate, it was never boring, and I was sorry to get to the end.” -Carole, Rainbow Reviews 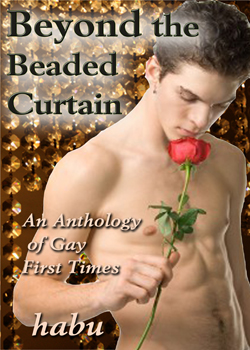 Beyond the Beaded Curtain (MM)

Mr. Collins had been a godsend. He’d taken me on immediately to work in the orchard and said he’d find something for me to do even after the harvest was in. He said it was the least he could do to support my dad and the rest of the troops that were over there in Afghanistan. The pay was all right, and the work helped me to trim down and muscle up better than spending money at a gym would do.

I’d caught on real fast, though, what Mr. Collins’s real interest in me was. He wasn’t married and had some of the other guys working for him living up at the house. I overheard them talking, and I paid some close attention to how they related to each other, and so I knew pretty quickly what Mr. Collins was like and what he expected of his hired hands. I wasn’t shocked or put off, really. Just conflicted. I’d had some confusion about what I wanted and was like myself in high school, but I’d never been brave enough—or fool enough—to go anywhere with some of my thoughts.

Sydney Collins brought those thoughts back, though. He was old from my perspective, but he probably wasn’t all that old. And he was a rangy, solid guy. Not handsome by any means, but not ugly, either. I guess a woman would have called him sexy enough. I just didn’t know.

What I did know that Sydney Collins was, though, was a touchy-feely sort of guy and one with something on his mind that included me in his plans.

The day before I’d come up here to check out the swimming hole again, he’d more or less trapped me at the fence while I was watching the new, sleek black mare he’d bought trotting around at pasture. He’d come up close beside me and put his arm around me in that real friendly manner he had.

“Yep,” I answered. “She looks mighty fine. Ridden her yet?”

“No,” he responded. “She’s still mighty skittish about that. She’s fine quality and needs to be brought along proper. I’m bringing in a horse handler to break her in for me. I want her to want to be ridden by me when I first mount her. Everything worth riding is worth breaking in just right.”

We paused, admiring the mare—in fact, admiring the whole beauty of the green pasture land on the gentle slope between valley and mountain, with its white fences and azure-blue sky. Everything would have been perfect if I wasn’t so aware of that arm Collins had draped around my shoulder.

“Why don’t you come on up to the house with me, Jake?” Collins suddenly said in a low, husky voice. “There’s something I’d like to show you.” 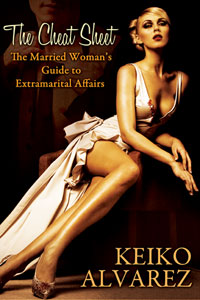