Dr. Feelgood: Sebastian's an up and coming pop star, but when appendicitis strikes, he ends up in the ER. Sexy doctor Brandon takes care of him, but Sebastian wants more personal care.

Light My Fire: Trapped by a forest fire, Trevor is rescued by handsome firefighter Will. There's a spark of lust between them that's impossible to put out.

Light My Fire by Jade Falconer

Trevor tried to open his eyes, but they instantly stung with soot. He squeezed them shut, feeling the heat of the flames still raging nearby. The winds kicked up so fast he hadn’t even noticed the fire until it engulfed the only door of the small cabin.

He was supposed to meet a few of his friends here for a weekend getaway. He had insisted on a cabin, because rustic was not his thing. His friends had hit a snag in traffic and he arrived before them, only to be caught in the sudden blaze. Now he was pinned to the floor under a beam, unable to move his body below his shoulders.

He could almost see the flickering flames behind his closed eyelids. He’d seen forest fires on the news, but he’d always thought there would be some warning, or that it wouldn’t happen to him. It would have been surreal if it wasn’t for the very real heat. He tried to concentrate on moving his fingers, but he wasn’t sure if he was doing it or simply imagining it. He tucked in his chin, trying to grab the neck of his t-shirt with his teeth to pull it up over his face, so he could breathe in less smoke.

In the distance, he could hear sirens, and he hoped they were coming for him.

Shouting came from outside the cabin, and the sound of water sluicing over the burning structure. The smoke increased, billowing inside the cabin. The door shook on its hinges, but didn’t open.

“The door’s jammed! I’m going in through the window!”

“Careful, Will! The roof’s already collapsing!”

“There’s a Jeep around back! There could be someone in there!”

Then there was a sound of shattering glass, and a large figure in a protective fire suit loomed from the smoke.

When he heard the glass break, Trevor whimpered. “Here,” he croaked, barely audible. He cleared his throat and tried again. “Here!” he said a little more clearly. “Help!” He tried to wipe his shoulder against his eyes, to blink away the grime and ash. “Help me,” he said in a half-sob.

“I heard something!” The man hurried toward Trevor, hunching down. “Shit! There’s someone here, all right! He’s trapped!” He bent down beside Trevor. “Can you move at all?”

A wave of relief washed over Trevor. “No,” he answered. He felt suddenly dizzy, as if now that someone else had taken responsibility, his body could start to capitulate to the situation. “Can’t move,” he said, blinking up at the fireman.

“Well, just try to relax. I’m going to get you out of here.” The firefighter’s voice sounded soothing and calm. “What’s your name?” He moved around, examining the beam that trapped Trevor.

“Trevor.” It hurt to breathe. It hurt to talk. But, the fireman’s presence was extremely reassuring. “I don’t even like fucking camping,” he said, his voice coming out in a bit of a wheeze.

The man smiled. “Well, Trevor. My name is Will, and I’m going to do everything I can to get you out of here safely. They’re putting out the fire outside, and I’m going to get this thing off you, okay? All you need to do is relax. Are you in pain?” The man spoke reassuringly, but all the while he checked Trevor’s vital signs and the beam that had him trapped.

Trevor swallowed. “It does hurt, yes, although mostly in my face and my neck. I can’t feel much below that.” The beam in question was squarely across Trevor’s abdomen, although his lungs didn’t feel constricted, just painful from the smoke.

Will smoothed Trevor’s hair out of his face and pulled out a bottle of water. “You must be thirsty. If you open your mouth, I’ll pour a little water in. Not too much.”

Trevor licked his lips, but his mouth was so dry. When he tasted the dribble of water, he moaned with relief. “More?” he asked weakly.

“Just a little more,” Will said, pouring a bit more into Trevor’s mouth. “You can have as much as you want when we get you out of here.” His radio crackled to life and he spoke into it briefly. Then he pushed back his face mask.

Trevor swallowed and winced. They didn’t seem to be making any progress in getting him out of there, though. “I have to ask...” he said quietly. “Am I going to die?” He couldn’t imagine them moving the beam that had him trapped there, and the fact that he couldn’t feel anything seemed dire.

“I won’t let that happen,” Will promised. He touched Trevor’s face gently. “I’m going to stay with you. They tell me they’ve got the fire put out, but they’ve got to move on to the next house. An ambulance will be here soon to take you to the hospital.” He bent over the beam, took a hold of it, and strained, but it didn’t move.

The patient came in about halfway through Brandon’s shift. He saw an inordinate number of Goth-looking people dressed in black hanging around, so Brandon figured he might be a famous singer. It did happen; this was LA, after all. He perused the notes as he walked to the examining room, and made an initial diagnosis of appendicitis just based on the symptoms.

He still looked down at the chart as he pushed the curtains aside, and ran into a solid wall of muscle. He looked up, startled, at possibly the tallest man he’d ever seen up close.

“Excuse me?” Brandon inquired, trying not to sound pissed off.

“Who are you?” the man grunted with what sounded like some sort of Eastern European accent.

“The doctor,” Brandon responded, trying not to sound belligerent. He wasn’t short, but this man had to be close to seven feet of pure muscle, and he couldn’t help but be a little intimidated. It wasn’t a feeling he liked. “Who the hell are you?”

Just then a small, graying-blonde woman bustled in, already apologizing. “I’m so sorry, so sorry, he isn’t supposed to leave Cameron’s side…”

“Well, he’s got to. I’ve got to examine the patient and that’s not a group activity,” Brandon said tightly, annoyed with the circus his examining room had become. “And who are you?”

“I’m Cameron’s manager,” the woman explained. “Emma. I’m so sorry. Should we wait outside?”

“If you want the patient to be treated, yes,” Brandon snapped.

As if prompted, a voice came from behind the mountainous bodyguard. “It hurtssss!”

“Right,” said Brandon. “Either you two, and whoever else is hovering out there, get the hell out or you can take the patient to another hospital.”

“Go,” the hidden voice responded, sounding a little stronger. “I’ll be fine. I’m sure the doctor won’t molest me.”

Brandon started to protest as the bodyguard finally shifted, and he moved past him.

Brandon raised an eyebrow as he looked at the patient. If he was famous, it must be for something he had no knowledge of, because he’d never seen the young man before in his life. He appeared quite thin and tall, dressed in black leather pants and a sparkly black shirt that hugged his body. He lay back down on the examining table, platform boots dangling off the end, arm propped behind his head. His hair was coal-black and spiked elaborately. According to the chart, he was twenty-one, but he looked both younger and older—older because of the dark eyeliner that was now smudged around his expressive eyes, and younger because he looked a bit lost, out of his element.

All in all, the patient was quite sexy, and he had to quash a sudden attraction. As a doctor, he was accustomed to setting aside his personal feelings. He had to. 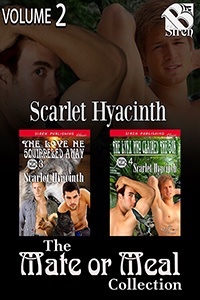 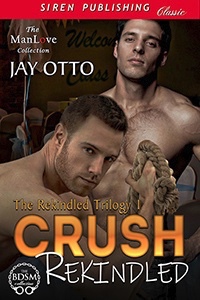