Illustrator Aaron Braun isn’t getting any younger and needs to find a man to settle down with. At thirty-six, he isn’t not opposed to dating, boyfriendhood, and eventually getting hitched but it’s hard to find the man of his dreams. His best bud Ford McCannon has a string of sexy boyfriends and is no help in finding his Mr. Right.

Sometimes, though, love might be right across your mother’s street. Enter Fazan O’Riley.

While visiting his mother, Aaron remembers having a crush on adorable and straight Fazan. But he might not be so straight, and Aaron’s mother sets them up on a date one a Sunday afternoon. What follows are twelve Sundays of unlimited romance, dating, lust, and frustration.

Does Aaron have the strength to keep their affair alive? Or will Fazan run back to his private life, choosing singlehood for good? 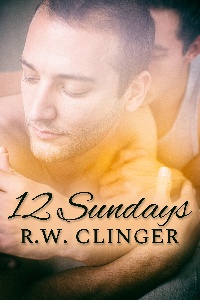 I tell Ford over my Heineken bottle, “It’s not a religious thing. This not-having-sex-thing with Fazan. He’s not a virgin. It’s not like he wants to wait until he’s married.”

“Well, that’s promising.” He shrugs. It tells me he’s listening but he honestly doesn’t know what to say. Perhaps he’s just humoring me. Maybe not, though, since he asks, “Doesn’t he ever just slide a hand against your dick sometimes?”

“Often. But the moments don’t go anywhere. He’s a tease. He gives me a stroke or two and stops. Sometimes he’ll even sniff my goods.”

He raises his eyebrows. “What about kissing? Don’t the two of become overheated and your clothes come off?”

“Shirts come off, but our shorts or jeans stay off.”

He tilts his head ever so slightly to the right, questioning my situation, puzzled. “This is the most goddam interesting thing I’ve heard between two fags.” A burst of laughter escapes his lungs and mouth. “The two of you are fucking priests.” Pauses. Shakes his head. “Wrong. Priests fuck around more than you and your boyfriend do.”

I roll my eyes and shake my head, embarrassed. “I didn’t ask you here to mock me. I just want to know when it’s going to be the best time to make a move on Fazan, and have sex with him. I was hoping you could help me with that.”

“I get it ... I get it.” He steers his view away from me and looks at the bartender for a few seconds, perhaps collects his thoughts, and returns his attention to me. He blinks a few times, rubs the back of his right hand across his mouth, and adds, “You told me his birthday is coming up. Right?”

I nod. “The thirteenth. He’s turning thirty-four. There’s a formal party at The Noir.”

“Fancy. It sounds exciting. Too bad Spence and I aren’t invited.”

The Noir near Heinz Field is beyond fancy. Chandeliers. Three bars. Three servers in tuxedos per table. More valet attendants than you can count. Expensive wines and champagnes. French chef Antoinette Vielle. A jazz band called Surve Made who has appeared on Jimmy Fallon’s show and at Ellen DeGeneres’s wedding.

“I’ll see what I can do. Fazan likes you two. I can probably get you and your lover boy on the list.”

“Good to know. Try hard. I’ve never been to The Noir before. It’s on my bucket list.” He takes a sip of his beer and says, “Did I tell you that Spence is in a rock band?”

He nods. “Yes. A Loverboy cover band from the eighties. He plays the drums. He wears big hair and leather. We should go see him. You and me.”

“Because it is fun.”

My thinking is on a one-track line: sex with Fazan. “Do you think I should seduce Fazan on his birthday and give him a round of sex as a gift?”

I shake my head. “Not until you help me.”

He downs his beer, emptying the glass bottle. He buys two more for himself and one for me. He looks me square in the eyes and says, “I think you need to slow your sex freight train down and let it happen on its own. When he’s ready, you’ll know. Don’t rush it. Just enjoy his company until he comes around.”

“You mean until he comes.”

He bobs his head. “Exactly. It will be perfectly romantic, and right. Don’t push it. Let him call the shots. Because if you don’t ...”

I cut him off with: “I could possibly lose him.”

“You could. And I believe you don’t want that to happen.”

“Then I think you know what to do. Nothing. Ride this boner you have for him out and ... the two of you will be fine.”

“If you like this guy, which I’m pretty sure you do ... Sex will come later. When he’s ready. In the meantime, stop thinking about it. And don’t worry. You’re adding stress to something that you shouldn’t be adding stress to.”