A Groovy Kind of Love (MM)

In this sweetly romantic throwback, two young men meet at Woodstock and dig more than just the music amongst the swirling sea of humanity, but will they find peace fifty years later? 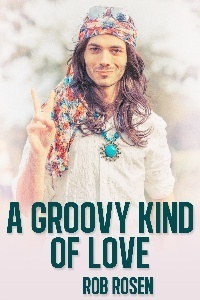 A Groovy Kind of Love (MM)

Don’t let anyone try and tell you anything different, Woodstock, despite its monumental problems, was awesome. Yep, even though we were only there during that on-again, off-again, rainy Saturday that tried and failed to wash off the caked-on mud and grime, it was worth it. Well worth it. Life altering, in fact.

In more ways than one.

The concert got off to a late start. No worries, though, because so did we, my group of six, best buddies traveling across two states in our beat-up van, looking to change the world. We settled in, found a patch of barely-there grass to lay some threadbare blankets on, and waited anxiously, breathlessly. The stage was off in the distance, seemingly miles away, the sound traveling just well enough to reach our ears.

Then again, the show around us was just as spectacular as what was happening on stage: half-naked, all naked, painted-on, tie-dyed, long haired, hippies, flower children, college kids, young parents and tiny toddlers, freaks, wannabes, men and women, black, white, and all shades in between. It was a true collective of humanity, a sight to fucking see.

And speaking of sights, I spotted him during Santana’s third song, then lost him hours later at the start of The Who’s long set.

He was way off to my right, a good fifty yards away, hunkered down in a cross-legged squat, his head tilted upward, his long hair cascading down his back in a torrent of dirty blond. His eyes were shut tight, a smile spread wide across his angelic face, a long goatee hanging precariously off his chin. The crowd faded from my line of vision, the roar of the revelers going suddenly mute. I stood up and walked over, my friends neither caring nor noticing my departure.

I sat down next to him, a foot or so to his side. I watched as Santana was replaced by Canned Heat singing “A Change Is Gonna Come.” Prophetic words. He opened his eyes, stared for a moment at the stage, then turned his head my way.

He nodded, grinned. “Peace,” he said, flashing his fingers in a V-shape. “Groovy day, huh?”