After being in both a romantic and D/s relationship for more than three years, Royce Cunningham and Jack Parker have decided to take the next step and move in together. What neither of them could have ever predicted was a global pandemic complete with a quarantine and social distancing to happen around the same time.

Now they're struggling to navigate through these trying times while also dealing with the normal stresses of learning to live together. In doing so, they've unintentionally let a few cracks run through part of the foundation of their relationship.

It'll be up to the both of them to recognize what they need, and maybe a special quarantine-edition playdate or two, to patch up those cracks and remind themselves that even in a world of new normals, they can still be the same to each other as they've always been. 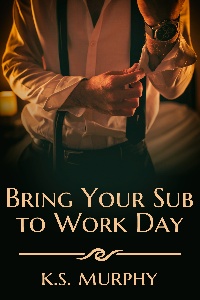 Jack's computer was opened but the earpiece was still on the desk so Royce wasn't worried about interrupting him again.

Big smile on his face, he let himself into the room, very excited for wherever this might lead. Royce halted in his spot, however, as he approached the desk and saw what Jack had placed on top of it. The bottle of cherry flavored lube didn't surprise him. What he very much did not expect was the rattan cane that laid across it right in front of Jack's computer.

Royce had a love/hate relationship with that thing. Jack could cause two different sensations depending upon the way he struck Royce with it. There was the sting. There was the thud. It also made Royce bawl his freaking eyes out no matter which way Jack hit him with it.

"You wanted my attention," Jack said with a smirk. "You've got it. Come here, little one. Kneel for me."

Royce, tearing his eyes away from the toy, came around to Jack's side of the desk and gracefully dropped to his knees. He knelt up on them so that he could present Jack the collar he'd chosen. They didn't exactly act on too much ceremony, but they did have their own way of doing things and sometimes it was nice to have their own little quirks.

"Good boy," Jack said, and Royce released a contented sigh. "Now turn around for me so I can put it on you."

Remaining upright on his knees, Royce turned and automatically lifted his arms to place his hands over his head. A collaring position.

Before Jack put the collar on, he dropped a kiss to the back of Royce's neck. A blush darkened Royce's cheeks and he needed to remind himself not to duck his head down so that Jack could collar him.

Once he secured it in place, and a floaty smile touched Royce's lips, Jack placed his hands over Royce's shoulders. This meant Royce was free to lower his arms, but he couldn't speak until Jack began.

And they always began the same way.

"Who do you belong to, Royce Cunningham?"

The response was not only instinctive, it was one of the best things he got to say. "I belong to you, Jack Parker."

"That's right. And what's the most important thing to remember?"

"That you love me, sir," he replied, "and that you'll always take care of me and give me what I need."

"And should anything I ever do make you feel unsafe in any way?"

"I always have the power to make it stop with just one word."

"That's my good boy," Jack whispered. "It's five after two now. My work day doesn't end until five thirty. So. I hope you thought this through, because you're going to be my plaything until then."

Royce exhaled sharply and lowered his head. Shit, he didn't think this through and yet he couldn't wait for it all at the same time.