Ilya Lewis is gonna kill his best friend Vera. She not only persuaded him off his couch and into the creepiest nightclub in the city, she also didn’t show. When Ilya learns the bar is split into two halves, and he’s been let into the wrong side, it doesn’t make things any better. Once the doorman determines which half to let you into, he won't let you into the other.

Ulric Moon hates the Ruby Tooth. But as a bounty hunter, he must go where the trails lead him, and tonight it’s landed him in the worst nightclub in the universe. All he wants is to catch the vampire he’s hunting, but despite trying to convince the veritas doorman examining his soul that he needs to be let into the good side of the club, he’s shown to the bad. As if that wasn’t enough, his destined mate somehow manages to sneak into the bad side where he doesn’t belong.Ilya finds a way to the other side of the bar, but one look at the patrons there has him regretting ever leaving his apartment. When he tries to leave, a scary-looking man who does nothing but growl follows him.

Ulric knows he’s freaking Ilya out, but Ilya has inadvertently caught the interest of the vampire Ulric is hunting, and he has to protect him. How will Ulric keep Ilya safe when he doesn't believe Ulric is a bounty hunter? And how do you tell someone they’re your mate when they don’t believe you’re a werewolf? 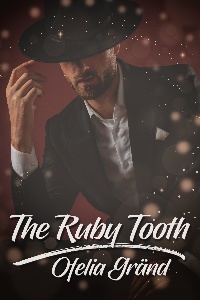 The man behind the bar looked like someone you should avoid, but he wore a Santa hat, and Ilya’s shoulders dropped a fraction.

“Ilya!” Vera jumped to her feet by the table she was seated at, and Ilya might have imagined it, but he believed the lumberjacks growled. Maybe Vera had misunderstood the theme of the night.

In the more lit area of the club, everyone -- or close to, at least -- had been wearing Christmas costumes. Here Ilya tugged at his tunic, wishing it hid more of his tights-clad thighs.

Nervously, he touched the tip of his ears. They were pointed. Vera had gotten him elf ears and body glue. They looked surprisingly real, but now he wanted them off. This was not the place to have elf ears, he couldn’t say how he knew, but he wished he wore his normal clothes.

Vera called his name again, and several heads turned his way. He hunched his shoulders and hurried over to her table. She was with a dangerous-looking man -- of course, she was.

Ilya hesitated. His heart beat fast, but not in a wanting-to-get-away kind of way. No, he found himself taking a step in the man’s direction, wanting to be close to him.

He stopped himself before he embarrassed them all. “Hi.”

He waved his hand but regretted it when the man groaned. Vera frowned at the sound but pulled Ilya in for a hug.

There was a growl coming from nearby. Ilya jumped then bent to search for a dog underneath the table.

“Strange. I could’ve sworn I heard a dog.” He focused on the man and almost jumped again. “Oh, cool contacts.” The man’s eyes were a glowing honey. Ilya nervously offered his hand. “I’m Ilya.”

The man grunted and grabbed his hand. Ilya never wanted him to stop touching him. Then he became aware of Vera frowning at him and tried to pull back, but the man refused to let go. For a second, Ilya’s heart jumped to his throat. The man wasn’t hurting him, but the hold on his hand was tight.

“Excuse me.” He tried pulling again, and the man let go. Ilya forced himself to take a step back and focus on Vera. “So ... erm ... what the hell are you doing here?” He kept his hissing low and was somewhat discrete as he gestured around. The man Vera was with saw him, of course. Those honey eyes never left him.

“The goon at the door showed me in here.”

“They were so creepy! When I tried to search for you, they stopped me.”

“Had to lie to the poor woman in the kitchen.” He shook his head regretfully, and the man chuckled at the same time as he buried his face in his hands. Ilya gave Vera a glance. The poor soul looked like he was having a breakdown.

Vera shrugged, so Ilya waved a hand and pretended the man wasn’t there. “Anyway, I was thinking ...” He wiggled his eyebrows at her. “Let’s grab some pie!”

Vera groaned. “No. You’re getting wasted, we’re gonna get laid --” The growl sounded again, and Ilya stared at the man. It had sounded as if it came from him, but it couldn’t have. He bent and glanced under the table again -- only legs. When he glanced up, the man was studying him.

Heat climbed Ilya’s cheeks. “Health regulations, of course. Didn’t think of that.” He nodded and a mix of a groan and a laugh escaped the man. Ilya looked at Vera again. Pie would be really nice now or to go home, slip on flannel bottoms, and curl up in front of the TV.

“But we just got here.” Vera toyed with her glass.

“No. I’ve been here for an hour, if not more.” He didn’t think it had been more than an hour, but he was already exhausted. This many people and having rushed through the kitchen when he wasn’t supposed to be there. It took its toll.

“Pie?” Maybe she’d agree to go to a calmer place. Not that this part of the nightclub was noisy. The music and the chatter had been louder on the other side.

“I’ll get us another round.” The man stood and put a hand on Ilya’s shoulder, making him jump. “What’s your poison?”

The man studied him for several seconds, then he shook his head. “This is what the other side looks like? I guess I was wrong then.” Then he turned to Vera. “Whiskey?”