Ex-Green Beret Jake Zimmerman’s Georgia mountain seclusion is shattered when the one woman he should never have left, pregnant Kiera McNeill, shows up on his doorstep. Her life is in danger, thanks to a botched Morpheus Squad mission. If the nature of her baby is discovered, evil forces will stop at nothing to capture Kiera. When Kiera learns of Jake’s top-secret Morpheus Virus running through his veins, she realizes that her protector is the deadlier threat.

Kiera knows the secrets of Fallen Comrades, a billion-dollar “charity” which siphons donations away from wounded veterans and into the pockets of power-hungry CFO Beau Lequire. Now her sadistic ex-boss, Lequire, wants revenge. Her only chance of escape rests in the lethal hands of the man who once rejected her: Jake. All she needs to do is suppress her feelings for Jake long enough to destroy Fallen Comrades, stay alive, and save her baby. 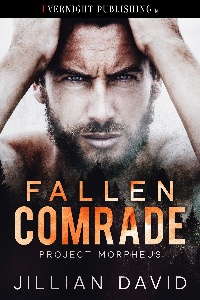 Thanks to his tree-mounted security cameras that made the system guarding the crown jewels look amateur, it took less than ten seconds for Jake Zimmerman to identify the vehicle creeping to a stop in front of his remote Blue Ridge, Georgia, cabin. Silver Hyundai Accent, five years old, brand-new tires. Getting the registration info from the license plate, however, led to a dead end. His computer kept cranking through databases. So far, nothing had come up.

Odd. Normally, he could get the information right away.

Where was the convoy? When would they storm the compound?

He cocked his head to the side. No whumps of an incoming helo.

Sparks of adrenaline fired up his nerves, lasering all of his senses on the intruder.

His first thought was that the Army had finally found him. He ran the pad of his index finger over the rough grip of the Sig nestled in his shoulder holster. How could anyone find him? He’d buried his personal intel deeper than a black ops mission file. The powers that be would have had to connect a hell of a lot of dots to figure out Jake’s real identity and location.

Besides, if Uncle Sam wanted to storm Jake’s castle, there better be a battalion coming. If Uncle Sam was smart.

He shifted, feeling the weight of a second pistol in the drop leg holster. With minimal concentration, Jake could detect the mild indentations of a Ka-Bar fixed blade in the sheath at the small of his back as well as the ever-present multitool tucked away in a pocket and ready to go for any occasion.

He peered at the … occasion … on the computer screen.

He kept the house lights off and waited despite a driving need to run out there and exterminate whoever had dared to invade his peace and quiet. Control, dammit. Drawing a hand over his face, he took several deep breaths and tightened and loosened a fist. The muscles in his neck clenched, refusing to loosen despite his automatic relaxation techniques.

The damned virus had started to take over his brain again until his entire world narrowed down to one mandate: destroy.

His ability to restrain those calamitous urges was slipping. Thanks to the top-secret Project Morpheus he had volunteered for almost two years ago in Special Forces, the part of Jake that had previously kept him from devolving into base violence now fucking loved it when he lost control. The darkness within Jake thrived on the anarchy that was his virally corrupted soul.

Add in an uninvited visitor, and it looked like tonight would bring even more fun for one of the U.S. Army’s best-kept secrets.

Question of the evening: what idiot would show up at his place at 2:00 AM? Better yet, why? It was mid-March, still damp and at times freezing up here in the southernmost part of the Appalachian Mountains.

Did the person want to rob him? Jake had no material items of value. Not for lack of resources, thanks to his combat pay savings and mother’s life insurance policy. But he didn’t need much—just the ability to keep his demons at bay chopping wood out back and lifting weights until oblivion. That, and a deep-seated desire to not interact with any other humans suited him fine.

Something of value? Well, he had a locket with a clip of smooth auburn hair he should have thrown away long before now. Yeah, he was a bastard for preserving the keepsake, despite being technically faithful to his then-wife who did not have auburn hair. Could explain part of why he was no longer married.

He peered out the window again. Whoever was out there remained in the vehicle. Come on, people, let’s go.

So. What to do about the person parked outside his house? Well, right now, his goddamned virus had a helpful suggestion. It wanted Jake to dismember whoever was in the car. Now.

Wiping his hands on his black cargo pants, he unholstered the Sig and crept to the front door. Time to eliminate the person stupid enough to visit him. Because one person could lead to two people, which could lead to being put back in the military “testing facility.”

Unclenching a fist, he carefully released more of his tenuous control over the virus. It infused every cell in his body with unnatural strength and reflexes. But as the strength and acuity of his senses grew, his sanity ebbed.

The hellish yin and yang.

Ingrained training was all that kept him from falling over the cliff into psychosis.

The one person who knew he lived here was Mateo, and Jake hadn’t seen his Special Forces buddy since Mateo and the rest of the Morpheus Squad had gone underground a year ago. Actually, strike that. He’d seen Mateo briefly at Brady McNeill’s funeral.

Brady’s funeral. And one particularly fucked-up night. Not in small part because of seeing Brady’s sister, Kiera.

Seen? A bland word for the silky skin sliding over him and around him during their sweaty, heated reunion.

Since that night, nothing besides Jake’s own misery mattered. Not his best friend’s death, not the Morpheus Squad, his own emotional baggage. Nothing.

Which was exactly what he had now, wasn’t it? Nothing.

Well, not completely. He had someone casing his house.

He licked his lips.

The figure closed the car door and stood, unmoving, facing the front porch.

Jake took stock in a matter of seconds: The person was around five-foot-eight, with a hooded jacket hiding the head and face in shadow. They favored one leg on those first few steps toward the house. Thin legs and what looked like a bit of a paunch. He squinted. Paunch or explosives vest? Damn it.

If the government had found him, they would attempt to take him back in for more experiments or wipe him off the face of the earth trying. Best of luck.

Maybe someone was lost out here in the mountains. The road petered out in another five miles, deep into the National Forest. Who the hell wandered around the Georgia mountains in the middle of the night?

He rubbed the back of his neck. The virus crackled through his nerve endings. Mental processes turned to sludge, making high-level analysis more challenging.

What a time to skip an antidote dose.

As a swell bonus for volunteering to become a walking military biological experiment, each Morpheus Squad member had gotten extra goodies, like Jake, with his extraordinary upper body strength. He rolled his shoulders, upper back, and arms, priming for action.

Each muscle popped as poorly contained rage swept through him, turning him from Dr. Jekyll into Mr. Hyde.

Sweat broke out on his forehead as the shaking began.

Using his military training and what little humanity he still possessed, he fought to retain a shred of control. Adrenaline whipped like an icy breeze on naked skin.

He tightened up on the Sig’s grip.

Neutralizing the guy was going to feel like nirvana.

On second thought, he could use a good brawl. Stuffing the weapon back in his holster, he flexed his hands. Mr. Hyde would much rather do this the natural way.

The hunched figure in the baggy jacket trudged up the gravel driveway, halting gait a little short on one leg. Jake spied a hint of a pale nose and cheek as the person looked up at the house, but he couldn’t make out any other facial features with the hood casting a shadow.

Pressing his back to the wall next to the front door, he waited. Listened. Biofeedback techniques and clenching and releasing his hands allowed him to slow his heart rate and focus all of his energy on the shuffle of footsteps up the porch stairs. The virus strained like a chained dog tempted by a wounded rabbit.

At a knock on the door, he didn’t move.

The spring inside of him tightened. Tick, tick, tick. His body ratcheted down as tight as he could go.

A tap on the electronic keypad outside. What the hell? The bolt turned and the door cracked open.