Worldwide panic ensues when a terrorist announces on TV that four thousand five hundred and two bombs have been placed in just as many cities all over the world and are set to explode in less than an hour, at midnight.

Janea Rockerford and her team are called in, and each agent sent to a different location. Will Janea be able to defuse the bomb set in place at the White House? Can all the bombs be found, and a worldwide genocide be stopped in time?

Janea works against the clock to defuse the bomb that threatens to destroy Washington. The clock keeps ticking, and Janea knows she’s met her first and final failure. Tick… Tock…

Opening her eyes, she concludes she’s in the afterlife. A hot doctor called Zane is orientating her. But is it the hereafter? What she learns next, will change her life forever… 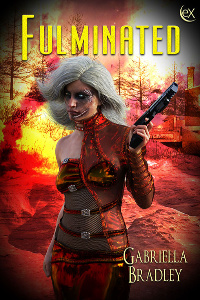 Her phone wouldn’t stop ringing. Agent Janea Rockerford felt like pulling her hair out. She was only one person, one body with only two arms and hands. She couldn’t be in every major city in the world at once. With the phone constantly buzzing and receiving texts, she couldn’t use it to contact her crew. Digging in the drawer of her desk, she took out a burner and sent an urgent group text message to the six members of her unit. But…even seven of them were not enough disposal specialists to defuse the bombs in time, which had been strategically placed in obscure spots in every major city of the world. Besides the fact that she and the members of her crew would each be on their own. Most of the time, they worked as a full team.

She was a much sought-after bomb disposal technician for the FBI. She was the best in the whole world, with a fantastic crew. Each had been handpicked and personally trained by her, to assist her, to work as a team.

Tiredly, she ran her fingers through her ash-blonde mop of hair. Just a few days ago, she had returned from Germany, where, with the help of her team, they had successfully defused two WWII bombs found near a farm. It was amazing that after so many centuries, WWII bombs still surfaced.

Her career was dangerous, but there had yet to be a bomb she could not defuse.

Just ten minutes ago, at 11 p.m., the internet, Facebook, Twitter, the rest of social media, and TV, had exploded with the face of an unknown terrorist. Well, not really a face. The man had worn a skeletal mask, and his voice was muted and distorted. He announced to the world that there were four thousand five hundred and two bombs planted in just as many cities all over the world, and one of them was somewhere in the White House.

According to his words, all the bombs were set to explode at the same time, at midnight. They would effectively destroy each city and surrounding areas. Millions of lives were at stake.

The terrorist had not made demands. He was cleansing the world of all its vermin and pollution, he had said. The broadcast had gone out worldwide. She glanced at the TV. A list of cities scrolled slowly by, last of all, naming the White House. Not that it would affect the president. He and his family and most of his detail would immediately be jetted to safety in Airforce One. The rest of the White House staff would be evacuated to the bunker built deep below the surface.

The terrorist called his group The World Saviors. World Saviors indeed…by killing millions? Janea waited impatiently for her team. Her mobile phone rang again. She glanced at the display and quickly hit the accept button. It was John Bruset, the director of the FBI.

“Janea, we need you here. Now,” he said as soon as she answered.

“You and everyone else in the world. My phone’s been ringing off the hook. Any idea where the bombs are located?”

“We’ll talk when you get here.”

“I’m already on it, anticipating your call. I’m waiting for my crew. They’re on their way.”

“The USA has your priority right now. Especially the bomb that’s been placed somewhere beneath the White House. Airforce One has departed. The president and his family are on their way to safety. Ignore calls from other countries.”

He hung up. How the fuck had they managed to place a bomb beneath the White House? The most guarded spot in all of America? She turned up the volume of her TV.

“Worldwide panic has ensued in every major city of the world. In the USA, troops have been deployed to begin evacuations. Citizens are urged to leave their homes in an orderly fashion…”

The newscaster’s voice droned on and on, at the same time showing clips of the mass hysteria happening in various cities and images of the clogged roads. Airports had been closed, and all outgoing flights canceled. Road rage was rampant. Looting of stores had begun. The troops and police had their hands full. The world was in chaos.