The only way Tara has survived is by stealing from the Chosen, the oppressors that now rule the few remaining people on Earth, called the outsiders. After she is forcibly taken and a pregnancy is the consequence, she gives birth to a diseased, stillborn baby. Devastated, she flees the hell that has been her home for so many years, not caring if she dies in the bare mountains beyond.

Rescue brings her more than she could have ever dreamed of, especially Zane, the man she’d thought just a figment of her imagination and dreams. Together, with the help of Zane’s small band of survivors living in the mountains, they try to come up with a plan to save Earth from the Chosen and their allies, the aliens. 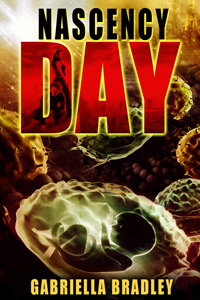 Tara scaled the wall easily, her big belly hardly getting in the way. She was just as agile as she’d always been, even though she knew her birthing time was near. The only things that hampered her were the baggy clothes. Unable to find loose enough attire for her present condition, she’d resorted to wearing men’s pants and a big baggy shirt. She’d removed the clothing from a corpse and had washed them gingerly with her water ration, the best she could—that’s if one could call it clothing. Wasting the water ration didn’t trouble her because she would never drink it anyway. She mainly used it to wash her hands, her feet, and some clothes. A piece of frayed rope held the frayed pants together just beneath her breasts. The shirt she could fit in twice and was full of holes. They were rags, like all the clothes worn by the outsiders now. Anything half-decent was reserved for the elite, the Chosen as they called themselves, God’s people waiting for redemption, their god, the one they’d invented—playing gods themselves over the outsiders. She’d often heard some of the older outsiders talking about the Chosen and the cult they had formed. The elite were diseased like the outsiders, but they were the stronger ones, the ones with weapons and so they had assumed the role of rulers and they had built their compound. How? She had no clue. All she knew was that they lived in luxury while the outsiders lived in squalor. They ruled the outsiders with an iron fist, their tyranny much resented and feared.

The babe stirred, causing her to pause for a moment, her fingers digging into the niches she’d scratched into the cement between the big stones that made the wall with a rusty nail quite a while after her parents had died. She’d started it out of boredom—the tall wall that hid the compound from everyone’s eyes always a mystery for a little girl. At night she would run across the forbidden zone, sneak to the wall, avoid the search lights, and huddle there, wondering, dreaming of the elusive city behind the walls, the riches and food that were there—according to her fellow outsiders. She had been slowly starving. It was hard to survive with no one to look out for her. She’d managed to scramble through the fighting outsiders’ legs to gather scraps that were thrown out by the Chosen, because her mother had told her if she ever ate the energy bars security handed out, she would become very sick and would die—the same with the water. Time and again, her mother and father had drummed it into her head. Don’t drink the water. Don’t eat the energy bars. She became weak, the bones protruding through her skin. Faithfully, she wore the gloves and the hood her parents had always made her wear, the clothing that kept her entire body covered. She’d slept wherever she could. Then a thought had occurred to her. If she could make enough niches, she could maybe climb that wall and see what lay beyond.

She’d slept during the day, and at night she’d worked hard, until the final niches were completed and she could lie on top of the wall and gaze at the compound, the buildings, its dark streets. It was harder to make the niches on the other side of the wall, as she had to work from the top down. The first time she’d climbed down the wall, she’d almost fallen. But she persisted and soon she could explore this wondrous community, though she didn’t venture far, fear of being caught by the Chosen always present. The elements, the fierce rains that slashed down from the heavens, the large hailstones that pummeled the Earth, had taken care of deepening the niches, making it easier and easier for her to climb the wall.

Orphaned at age six, she’d quickly learned to fend for herself. Her parents had once belonged to the Chosen, but they’d fled the compound when Tara was still a toddler. She didn’t know why. They’d never told her because she was too young. She couldn’t remember if she’d ever seen her parents’ faces, the memories of them were just vague shadows in her mind, a blur—loving hands, a kiss, a hug, that’s all she remembered—and longed for so often. One day her mother and father were there, then they were suddenly gone. She’d been so lost and lonely and had no idea where they were, until some outsiders had told her that security had killed her parents. Dead. Gone forever.

Love and the Two Wranglers (MFM)
Marla Monroe
In Shelf
$3.99
Tweets by
sirenbookstrand