Interrupted Escape: Where to Go from Thirty-Seven?

American music professor Craig Simpson gets jolted out of a relationship with college student Kurt that Simpson thought might be permanent on the cusp of a trip they were to take together of a cruise up the Rhine/Main river from Amsterdam to Nurnberg, capped off by attending the Bayreuth Wagner Festival.

The breakup comes at a bad time. Simpson, thirty-seven, is staring at entering his middle age with doubts of the role, if any, he can sustain in an active gay lifestyle.

He once was a submissive to older men; but for the last nine years he’s been a dominant for younger men. Now he doesn’t know if he has a role to play at all. He goes on the trip by himself, seeing it as an escape from his current sexual dilemma and resolved to use the time to see if he should or even can transition into a nonactive lifestyle.

As he journeys toward Bayreuth, though, that resolve is challenged from every direction. 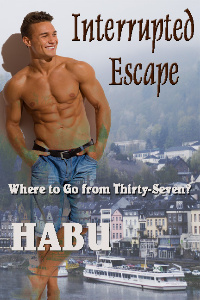 Interrupted Escape: Where to Go from Thirty-Seven?

Shit. I’d hoped to get a clean escape. I stopped on my journey to the Delta check-in desk at New York’s JFK international for the evening flight to Amsterdam and turned.

“Hello, Kurt. You didn’t come from New Jersey to see me off, did you?”

My erstwhile live-in was approaching me, looking oh so young and sexy. Looking past him, on the outside of the doors to the departure hall, hovering, loathe to come in, I could see Kurt’s new lover, Austin. He was young and sexy too. How did I ever think that, at thirty-seven, I could hold a beautiful college junior? Perhaps if he had been taking a class from me at Rider University’s Westminster Music College, I could have held his attention for more than a semester. Housing and feeding him hadn’t been enough. If I’d had the power of grades over him, perhaps . . . but that was unfair and nasty of me. I had just gotten too old for him.

“Of course, I did. I couldn’t leave it as it was. I would have loved to come on the Rhine cruise and gone to the Bayreuth music festival with you. I feel terrible that you have to pay for two fares—that there wasn’t time for you to find a replacement.”

Sure you did, little guy. You came to the airport to make sure I was getting on the airplane. Then you and Mr. Replacement are going to rush back to Lawrence and jump in my bed. What’s really regrettable is that I didn’t make an effort to kick you out of the house before I took this trip. But I did manage to cancel your air fare and get the money back.

“I don’t really want to talk about it, Kurt. It’s too late for any of that.” Even as I said it, I wondered if it really was too late—if we could somehow smooth this over. I was that pathetic. This having forty looming in my near future and not wanting to less loose of young men was eating me up.

I wondered when he was going to tell me he was leaving me. Would he have gone on the trip if I hadn’t honed in on the rumors on the campus and caught him in bed with Austin? Austin was a senior—a bass in the Westminster Choir that Kurt was a tenor in. They both were beautiful young men—and of much the same age. I didn’t have a chance once they’d found each other. But, of course Kurt would have gone ahead and taken the trip—and probably would have let me continue bedding him as well. He was a music student and had more morals that I’d ever discovered. It was a chance of a lifetime to have his way paid to the Bayreuth summer music festival in Richard Wagner’s town. Not as much of a thrill as it would be for me, of course, since I taught music composition, concentrating on the German composers, at Rider. But it would have been a special trip for him as well—with a Rhine cruise thrown in. All he’d have to do is to let “the old man” lay him now and then.

“I know how hard it is to get tickets to the Bayreuth festival,” he said.

“Do you?” I answered. Did he know that the shortest wait I’d heard about was six years—and that it had taken me seven years on the wait list? Fuck, he hadn’t even been the young man I’d been ticketing to go with me to the festival. Not even the second to last of the young men. I’d had a succession of male students in my bed since I’d joined the Rider faculty, thinking each of them, in succession, would become a permanent part of my life. They’d all been music college students. They’d all been in the Westminster Choir. I was in a rut. And I wasn’t getting any younger. I needed to escape—escape being on the treadmill of wanting much younger men in my bed. Once I’d reached forty that would be the natural end of all of that. Would my life end at forty?

The Rhine cruise and two weeks at the Bayreuth festival—and maybe a lone motor tour of Bavaria was the escape I needed now.

I should just cry off younger men altogether—maybe all men.

“I can’t dally, Kurt. And you can’t come any farther than here. I’m prebooked. All I have to do is get my boarding pass out of the machine and then go on to the business lounge. I’m sorry you felt you needed to come to the airport to see me off. You saw me off when you let Austin Taylor fuck you.”

That did it. He gave me a shocked look and shrank from me. He automatically turned his head and gave Austin, still on the other side of the glass, a pained look. That was it. He’d looked at Austin in shock, not at me. 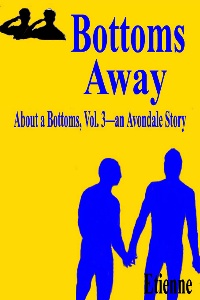 Bottoms Away (MM)
Etienne
In Shelf
$4.99
Tweets by
sirenbookstrand