Katie Mayes is the executive manager for a large, east coast beach resort. Unfortunately, her boss has discovered her one secret -- her seasonal flings with Caleb Beckett, the Entertainment Director. Company policy dictates no internal fraternization, especially between managers and their subordinates, so her boss gives Katie a choice.

Caleb or her job.

She avoids personal encounters with Caleb, until one fateful night a week before the resort’s big summer launch. Then, she runs into him at a local nightclub. When Caleb approaches her, she tries to give him the cold shoulder, but he follows her onto the dance floor where the music, her desire, and his persistence break her will. She claims it’s one more before they break it off completely, but Caleb insists on more than just a single night with her. Far from an ending, he views the summer as their true beginning. 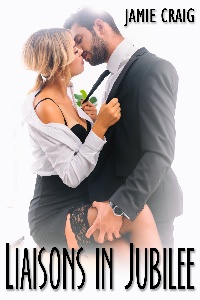 “I’m glad you changed your mind,” Caleb murmured before deepening the kiss. He continued to thrust into her, but his body was taut and trembling against her sweaty skin, like he might shatter against her. “I won’t be able to stay away from you.”

His words made her smile, but she hid it from him by licking a path along his jaw, nibbling at his neck as she tugged his shirt up and out of her way. She wanted to feel his hard muscles, feel his slick skin sliding across hers, but that wouldn’t be possible here at the Wooden Nickel or even at one of their places. That was inviting getting caught, and if she was going to have one last night with Caleb, she didn’t want it tainted with worry.

Katie pulled back to meet his dark eyes. “How badly do you want this to continue tonight?”

The air whistled between Caleb’s teeth as he inhaled sharply. “What do I have to do to show you how bad I want it?”

“Help me sneak into the executive bungalow. The bigwigs went back to the city instead of spending the night, so it’s all empty and lonely until next weekend.” She ran her tongue over her bottom lip. “And you have to stay naked with me the whole night to make up for lost time.”

Anybody else might have balked at the suggestion of using the executive bungalow, but he didn’t miss a beat. “Absolutely. Do you have the keys, or are we staging an old-fashioned breaking and entering?”

“That depends.” She traced a flat nipple before flicking the hard tip with her fingernail. “You want to waste time waiting for me to go all the way back to my office to get the key, and then all the way out to the bungalow? Or do you want to get straight to having your wicked way with me on every flat surface we can find?”

Katie didn’t know if it was her sinful promise, or the scrape of her finger across his nipple, but he shuddered against her, a low moan escaping his mouth as he thrust into her one final time, slamming against her clit. The sudden pressure sent sharp pleasure through her, and she curled her nails into his skin as her second orgasm overwhelmed her. He clamped his hand over her mouth as she opened it, muffling her shout of pleasure.

His breath was hot against her face as he silently gulped for air, his mouth so close to her cheek that it almost felt like he was kissing her. When he spoke, she could hear the smile in his voice. “I can get us in without a key.”

She leaned into the caress, nuzzling against the rasp of his hair. “Of course you can,” she whispered with a laugh. “You, Caleb Beckett, are a man of astonishing talents.”

“Including several I intend to reacquaint you with tonight.”

“Is that a promise?”

“Or a threat. But it’s all the same in the end, isn’t it?” Caleb said, finally disentangling himself. He zipped up his pants, but made no other effort to straighten his clothes or hide the fact that he had just fucked her against the wall.

Using the wall for support, Katie did her jeans back up, her eyes never leaving Caleb’s. She wasn’t sure what game he was playing at, but this entire encounter had already shattered every rule she’d ever given herself in regards to him. At least she was giving their affair the send-off it deserved. They had started with an explosive bang; it made sense that it end the same way.

“I think there’s a door out there, waiting for you to break your way in,” she teased. She ran her fingers along the lapel of his suit, then curled the fabric into her grasp in order to pull him flush again with her body. “Ready to go tear it down?”

“Tear it down?” He kissed the corner of her mouth. “I think you know I work with a bit more finesse than that.”

She smiled and kissed him back. “I’m counting on it.”

Claimed by Her Mafia Man (MF)
Sam Crescent
In Shelf
$3.99
Tweets by
sirenbookstrand