What His Cowboys Want (MMM)

Three cowboys. Three relationships. Three ideas of what truly gets them off. Can each learn to give what his cowboy wants?

Sam "Sly" Yates left Sunset, Tennessee, three years ago running from things he wanted and looking for things he couldn't find. When he turns around to find himself face-to-face with what he wanted most, he realizes he's run full circle, right back to Trace Tanner's arms.

When Sly walked away, Trace was certain he'd lost the only man he'd ever love. Then he met Cord DeMoss and learned a man can love twice, even while the heart still belongs to another. Now Sly is back, and to Trace's surprise, Cord sends him straight to Sam's arms.

Cord stopped gambling. But when he spots Sam at the bar and realizes he's the man who holds the other half of Trace's heart, he places one last bet. If he loses it could cost him his heart. But if he wins he will be able to give both his cowboys what they want.

What His Cowboys Want (MMM)

4 ANGELS: "I found Sunset Cowboys 1: What His Cowboys Want totally captivating. I could not believe how much love Tonya Ramagos managed to pack into such a short story. Not only was the sex HAWT, especially the scene between Cord and Sly, but the premise of the story was well thought out and put together. I truly enjoyed this story and wish it was longer. I will definitely pick up other books by Ms. Ramagos." -- Nickie R., Fallen Angel Reviews

4 CHERRIES: "I really felt connected to this story, and wanted everyone to find their happy endings. I definitely wasn't disappointed with this offering by Ms. Ramagos. She'll stay on my auto-buy list for a long time. If you like to read about gorgeous hunks and steamy sex, then this is the book for you." -- Statice, Whipped Cream Reviews

Trace felt the burn of Cord's words like a branding iron to his chest. Cord wanted him to talk to Sly, to go to the other man, to settle things with him. The shock that settled in Trace as he stared into Cord's roughened, handsome face numbed a bit of the ache from the suggestion. The hard lines and angles only accentuated the man's dark eyes and even darker hair. Those eyes, usually dancing with a hint of danger and mystery, gazed at Trace now with a blankness that made it impossible for Trace to read his lover's thoughts.

"You want me to talk to him," Trace heard himself repeat dumbly.

"Trace, baby," Cord's strong arm slipped around Trace's waist and he pulled him closer, held him tighter. "It's eating you alive the way this guy left things between you, the way he up and left you."

Cord hooked a finger under Trace's chin, lifting his face when he bowed his head. "You have no reason to be sorry. It's not like I didn't bring my own ghost to this relationship."

That much was true. Trace wasn't the only one who'd been burned by a former lover. If Trace guessed correctly, Cord still held a torch for that lover, too, just as Trace did for Sly. Still…

"Yeah, but you don't rub my nose in your past shit." As a matter of fact, Cord had told him little about the man who'd shattered Cord's heart. Trace couldn't even find the man's name in his memory banks, much less the details of their relationship. God, somehow that made him feel even worse.

Cord chuckled and his eyes softened. A smile full of amusement unfolded on his shapely lips and lit his face. "You make it sound like I'm a puppy you've been attempting to house train."

"Only to do domestic chores," Trace managed to joke and forced a smile.

"Talk to him." Cord kissed the tip of Trace's nose even as Trace's smile faded. "You'll feel better when you do."

Would he? Already he felt worse than he had since he'd faced the fact a few months after Sly left that the man wasn't coming back. "What are you going to do?" Surely Cord didn't mean to stand here and watch as Trace went to another man. On the other hand, the thought of Cord leaving him here with Sly a mere few feet away both boggled and terrified Trace.

"I'm going home." Cord brushed his lips to Trace's this time, angling his head so the brims of their hats didn't collide. "Give you some space. I'll see you later."

Trace felt his mouth fall open as surprise delivered him another whammy.

Cord nipped Trace's bottom lip and then slowly eased back. The tenderness in the gesture, in Cord's expression, in the feel of Cord's arms around him brought tears to Trace's eyes. Sometimes Cord could be so loving and gentle. The other times, however, the occasions when his desires to be rough took over, tended to get in the way.

"Don't look so worried, Tray. I love you, baby. I just think this will be good for you, for us." His big hands dipped from Trace's waist to cup his ass and he made a deep throated "Mmm" sound. "And when you get home I might have to pretend you made that shot after all so I can lick you all over."

“That was, Christ, my knees are weak.” Trace did smile then as his hand came to rest on Sam's shoulder for support. “I don't think you've ever sucked me off like that.”

Sam turned serious. “Does it bother you that I had a little added excitement to make it happen?”

“Satisfying enough to reward our Sam for his good behavior?” Cord asked and Sam's heart skipped and tripped and damned near raced out of his chest.

Trace's other hand came around Cord's neck and Sam saw Trace's fingers lightly caressing the other man's skin. It made him want to feel that gentleness, too, made him want to give it. He didn't ask permission. With Trace, he didn't need it. He hooked a hand around Trace's neck and pulled the man in for a sweet, tender kiss that soothed his needs even as it heightened the ache in his cock.

Cord didn't interfere but waited until Sam pulled back before he spoke. “Trace, will you suck Sam's cock while I fuck him?”

Trace moaned, a low rumble of agreement. Sam saw Cord's phrasing pleased Trace, too. Cord asked Trace, not told him. Yes, this would work between the three of them. It would work exceptionally well.

“Only if I can fuck you next.” The intently serious and thoroughly heated look Trace gave Cord made Sam moan.

“We should probably get out of the pool for this one,” Sam suggested. “Maybe head for the house.”

They made it as far as the lounge chair at the poolside before Cord attacked Sam from behind. Cord reached around Sam, catching his throbbing cock in his calloused hand and holding on as if Sam's cock were the only thing keeping Cord on top a bucking bull.

Sam cried out from the pained pleasure. Explosions of glorious white-hot ecstasy sparked in his vision as Cord guided him to sit on his knees on the lounge chair. His gaze met Trace's and he was surprised to see not concern in Trace's eyes but happiness and a wicked smile on his lips. He enjoyed seeing Sam in this position, venerable to Cord's command.

“I'm ready when you are, sweetie,” Cord told Trace over Sam's shoulder. Trace nodded, brushed a tender kiss to Sam's lips and then lay down on his side on the lounge chair, effectively putting his mouth dead level with Sam's cock.

Sam felt Cord's dick pushing at his back entrance but Cord didn't thrust inside until Trace took Sam's cock in his mouth. Pain made Sam cry out. Pleasure made him rock back on Cord's dick, taking each viciously rapid thrust faster and harder. Ecstasy made him shudder in Trace's mouth, his balls gripping between his legs like vises, the orgasm but a thought away. Everything stilled when Cord's heated breath whispered in his ear.

“Did you ask permission to come, slave?”

Sam shook his head, unable to speak. A hard pinch to his ass cheek and an even firmer squeeze to his balls jerked the word from him. “No. No, Master. May I please come?”

“Trace, are you ready for Sam to come for us?” Cord continued to squeeze as Sam's balls, even as he relentlessly thrust in Sam's ass, even as Trace continued to suck and blow and torment Sam's cock. Sam bit his lip, almost breaking the skin, in his effort to hold back the explosion building in his cock. It felt like an eternity before Trace answered and even then it wasn't with a word.

The other man gave a thumbs up. Sam saw it through the crack in his heavy lidded eyes and tried not to sigh with relief. If he did, Cord would no doubt deny his release longer simply to antagonize and torture Sam.

“Slave?” Cord made the name a question.

Sam managed to speak but barely. The bastard intended to draw this out as long as possible anyway. Damn Cord! And damn himself for getting such a demonic thrill out of this whole submission thing. “Yes, Master?”

“You may come when you're ready, Sam.”

Sam stopped fighting. The come jutted from his cock into Trace's mouth with such rocketing force Sam actually screamed with it. His body shook, his head spun, his muscles ceased and all the while Cord fucked him. It was a primal orgasm, an animalistic mating and, when Cord joined him seconds later, Sam thought he might die from the pleasure. 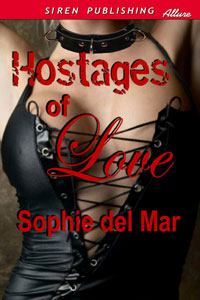 Propositioned by a Lady (MF)
Paige Cameron
In Shelf
$1.99
Tweets by
sirenbookstrand