Malachi Hawkins left his home to move west as soon as he was old enough. Running from a family secret that he can never escape, he takes a job on the ranch of an old family friend, Lee Rose.

The first night he's there, he meets Christian Rose, Lee's foster daughter, a young woman of mixed Comanche blood. They call her a savage and treat her like the family slave, but Mal doesn't see a savage at all. He sees a woman of unbelievable strength -- and a kindred spirit.

But his secret is bound to catch up with him, and when it does, it could destroy both of them forever ... 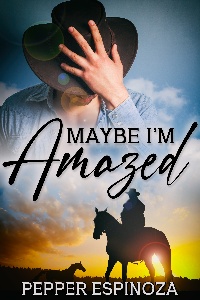 "As simple as that? You'd leave Mercy behind?"

Mal exhaled slowly. He got by on whatever jobs he could find throughout the year and he was happy with that system. He didn't have a home and he barely had two pennies to rub together. It would be ridiculous to hitch himself up with Christian and even crazier to take on the responsibility of a young girl. Especially after only three days. But they weren't making any concrete plans. This was all still firmly in the realm of the hypothetical.

"I think if we had to leave, I wouldn't ask you to go without her."

"Most would. But she wasn't much more than a baby when our mother died. I couldn't leave her, too."

"Do you have a sister? Or a brother?"

"I had many. The Rangers only took the two of us because they claimed we were the only white children."

Christian shrugged. "I don't know. That's just what they said."

Mal wanted to suggest it was better this way. She was educated, and if she ever got away from the Rose family, she could pass as a white woman. She could have a normal life if she wanted it. But regardless of the situation, he could never say it was best to be separated from parents, grandparents, and siblings. He knew that pain firsthand and he would never wish it on anybody, for any reason.

She touched his chin, guiding his mouth to hers. He stiffened, his muscles tightening against rigid bones. He didn't want her to stop, and he couldn't push her away, but he wasn't sure how to respond either. He wanted her -- the way his pants tightened across his lap was proof enough of that. But he didn't want to hurt her. Not in any way.

"Kiss me, please, Malachi." The request, like almost everything she said, was just a hint of sound. He wasn't even sure he heard it, but he did feel it. Each word winding through him, down into his chest, burrowing into his flesh.

He cupped the back of her head, his fingers splaying across her skull. Her eyes were dark stars, and they tracked his movement as he found her mouth again. Her lips parted almost before he was ready, and the tip of her tongue electrified him -- his spine tingled, his cheeks prickled, his cock hardened. She tasted like the candy she had bought earlier that day, and the coffee she drank after dinner. She tasted familiar.

Christian steadied herself by gripping his shoulders, and her fingers were like steel bands in his flesh. He wasn't sure if she was trying to keep herself from falling, or trying to keep him from leaving. Either way, she had nothing to worry about. He wouldn't let her go, and he wasn't about to try to get away from her. He had only known her for a few days, but it felt like he had been waiting his entire life for this kiss.