Pick Up the Pieces (MM)

Change comes to all of us. For Theo Bascopolis, the first time is when he's fifteen. He finds his life falling apart when his father discovers Theo is gay and orders him to become straight or leave. Having no choice, in spite of what his father might think, Theo leaves. But where can a fifteen-year-old go? Especially when it starts to rain. He thinks things are looking up when he meets a striking man named Franky, who seems very attracted to him. However, once again Theo's life changes when he learns all Franky wants is for him to hustle. And so Theo becomes the rent boy Sweetcheeks.

However, Franky underestimates Sweetcheeks, and the results of the ensuing fight sees Sweetcheeks fleeing to Washington DC, where he crosses paths with a group of rent boys who take him in. Finally Sweetcheeks has a family, a home, and an additional source of income in the form of apartments they're able to rent out.

His life changes again a few years later when a mysterious tenant by the name of Mark Vincent becomes the reason behind the assault on one of Sweetcheeks's boys. Vincent visits the boy in the hospital, bringing with him his equally enigmatic trainee, William Matheson. The instant attraction blindsides Sweetcheeks. In spite of knowing love isn't for rent boys, he hopes Matheson can see beyond the body he's offered to so many.

But Matheson has secrets of his own. Can Sweetcheeks overcome his insecurities enough to believe in the quiet man who's come into his life? Can Matheson keep his actual occupation a secret without it jeopardizing their budding relationship? 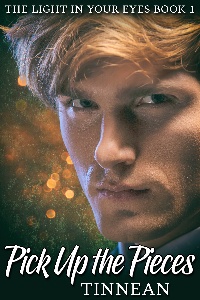 Pick Up the Pieces (MM)

I'd been with him for almost two months when he came home one night with a video camera.

And I let him film us, because it made him happy.

A few nights later, he brought home another boy. The boy was about my height. He had dirty-blond hair and light-brown eyes, and the clothes he wore were ragged and filthy. I stayed as far away from him as I could when I thought I'd spotted lice in his hair.

"This is Jaybird. He'll be staying with us." Before I could object, he said, "He needs a place to stay, Sweetcheeks. You remember how it was when your old man threw you out, don't you? Be nice to him."

"Tomorrow we'll get him some clothes." His gaze went from the boy to me, and he nodded and muttered something to himself, something about doing it in the fitting room?

No, that couldn't have been right.

"Meanwhile, show him where the bathroom is. He needs a shower."

"It's this way." I walked toward the back of the house, watching him over my shoulder. The boy looked around but didn't say anything until we entered the small bathroom.

"You been wit' Fast Franky long?"

"How does he treat you?" He took off his shirt, and I was bothered to see track marks up his arm. He scratched them and then vigorously scratched his scalp.

Jaybird laughed. "Yeah? That's a good one." He pushed his pants down his legs. He wasn't wearing underwear, and I jerked my eyes away from his dick. "You can look at me. I don't mind."

He was thin, with a narrow chest, a sparse growth of pubic hair, and a small, uncut dick.

"Thirteen." He leered at me. "I been thirteen for four years now."

He laughed, not a nice sound, and turned on the shower.

"I already had a shower."

"Yeah. I want you two together."

"Take your clothes off."

Automatically, I obeyed him. "Franky ..."

Jaybird walked in, drying himself off with the towel. "How do you want me?"

"We're gonna have us a sandwich. You're the filling."

"I do what I want, and what I want right now is a change." He rose from the bed, barely giving me a glance. "Now, lay down in the middle of the bed. No, the other way."

Numbly, I changed positions. In spite of the shower Jaybird had just taken, his dick smelled, and for the first time in weeks, my gag reflex kicked in and I started retching.

Jaybird pulled away from me. "You ain't yakkin' on my dick!"

I scrambled to sit up, swallowing frantically so I wouldn't puke.

"Goddammit, I thought you were gonna be nice to him!" And then Franky hit me. He'd never hit me before. Even Poppa had never hit me in the face, not even when he'd found out I was gay.

"Get the fuck out of here! You can sleep on the sofa!" He turned to Jaybird. "C'mere."

I grabbed up my clothes and ran from the bedroom to the bathroom. It took a while for my nose to stop bleeding. It took a longer while for me to stop crying.