Escaped slave and radical Genthry is facing down his final moments, bound to the execution platform, when some soul detonates the platform and the prison wall. He didn’t plan it, but he’s more than happy to take the opportunity to escape and thumb his nose at fate yet again.

By the time he gets his hands on a ship, the authorities have caught up to him in the form of handsome marshal Dryath Riatt. When a passerby knocks the marshal out, Genthry takes Riatt “hostage” to save him from the angry crowd.

Dryath knew he shouldn’t have thought the job was done just because he got his hands on escaped killer Genthry. He wasn’t counting on the local crowd jumping in to help the dirtbag escape, the local garrison refusing to lift a finger to help him ... or Genthry being possibly the most beautiful man he’d ever seen. Now he’s a captive, restrained, and flying to some unknown destination with a terrorist who doesn’t make him feel unsafe at all.

When an encounter with pirates forces a sudden landing, Genthry and Dryath must hide together before either can find safety. Can they overcome their differences, or will these enemies sell each other out before they can find happiness? 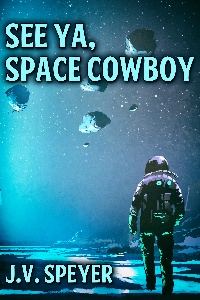 Genthry pulled his cloak closer. Half of getting away with these things -- with pretty much anything -- was attitude. He had no business being out here, in public, with his magenta skin. Every Ayak on Kindara was in danger as long as he remained here, and showing his face was arrogant in the extreme. None of that mattered.

He’d found clothing, and cash, hidden away in a small cave after he fled to the woods. He had no way of knowing if it was meant for him. Plenty of the miners stuck on this miserable rock would have reason to hide, and reason enough to want to a taste of freedom, too. He decided not to look a gift horse in the mouth. If he found out later on he’d hurt someone by taking the stash, he’d find a way to repay them.

In the meantime, he and every other Ayak on the planet needed him to get gone.

So, he walked through the marketplace with his head held high underneath the voluminous hood, and his back straight. It didn’t exactly stand out in this part of town. Most people who ventured out in public weren’t engaged in business they wanted associated with their legal name or face.

Assuming they had a legal name, of course. It was an awfully big assumption here, all things considered.

He glided among the shadows cast by the tall, nondescript gray buildings. Someone had tried to give some of them color, but the constant battery of gritty wind made sure none of it lasted. Even the sand was gray on this dump. He couldn’t wait to put this place behind him. Even if he hadn’t had his near-death experience to spur him on, he’d want to get gone. He needed to be someplace else, and that was all there was to it.

He found the nondescript gray building he was looking for and glided through the automatic sliding doors. The place looked like a seedy grocery store, not much different from any other in a crappy neighborhood like this. The shelves held mostly dust, along with sealed pouches of goo that purported to taste like this vegetable or that meat -- whatever form of sustenance any given species might be used to.

They were all lies, of course. They all tasted roughly like paste. But they filled the belly and provided energy, which was all they were supposed to do. If a slave died from malnutrition, no one cared.

He strode through the shelves as though he owned the place and stood on a slightly discolored tile near the back. The scrawny girl behind the counter didn’t really look at him, nor did he want her to. She’d find herself in trouble for knowing he’d been there, even if all she knew was that “some man” showed up. When the dingy wall panel slid open, he stepped through without a backward glance. If the girl had any curiosity at all, he never knew.

The door closed behind Genthry immediately. In the middle of a workday, there weren’t many people in the hidden bar. The bartender was an Aerul, and his head bore a deep dent in it from some prior incident. Genthry had his suspicions about the source of that dent, but he supposed he had a bias. He spotted a few Graylau sitting around near one end of the bar, and a lone Bsinn woman dancing listlessly in a cage near the back of the room. A couple of scarred, unwholesome-looking humans lurked at a table a short distance from the Graylau. Genthry vowed to give them a wide berth.

He approached the bartender, who eyed him up and down. “What’ll it be?” His voice was grated against the air like broken glass. Mine dust had torn up his lungs then. Genthry had heard it all too often.

“Whiskey, please.” He slid his coins across the counter. Every so often the Republic tried to force people to use credit, but it never took. Eventually they would have to reconcile the demand that everyone pay their own way with the desire for a monetary system that required legal names and identities. In the meantime, cash continued to flourish, and Genthry continued to laugh at them.

The gray skinned Aerul grunted and shuffled off to the shelf. It was, of course, illegal for a non-human to drink actual whiskey. It was illegal for this bar to exist. Genthry would laugh, if he weren’t so tired of it all.

The bartender returned with the whiskey, but eyed Genthry before handing it over. “I don’t want no trouble.”

Ah. Genthry’s disguise had been a little too efficient. He let just enough of his cloak fall back to reveal the skin on his wrist. “No trouble from me, friend. I’m just here to meet someone and I’ll be out of your hair as soon as I can be on my merry way.”

The Aerul’s eyes widened, and he coughed heavily. “You’re him, aren’t you?”

One Wild Omega: An MPREG Omegaverse Book
Kelex
In Shelf
$4.99
Tweets by
sirenbookstrand