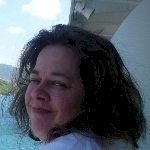 I’m in my mid forties, single and living in a caravan in the north west of England with my mum, who at 71 years of age is more spry than I am! We look after each other, and enjoy travelling. I love Greece, and have visited the island of Kos, Crete and Kefalonia since there is a great vibe to each of the islands, all having their own character. A few years ago I was able to visit Hawaii on a cruise ship from Los Angeles, and spent eight days at sea and then four fairly intense days trying to see as much as possible before returning to the west coast of America again, before flying home. Since then, I’ve done two other cruises, around the Canary Islands and the western Mediterranean and am planning one to Iceland and another to the Caribbean in the next couple of years.

I’ve always loved to read, and enjoyed writing stories as a child, but the need to work along with family pressure to work at jobs which had a regular salary, rather than any serious application to write and get published led to me working in various jobs both in retail and the travel industry.

I left school at 16 years old, being an army brat and having my education disrupted every two years, so as soon as I was legal, I walked out of the latest establishment and decided I needed money rather than playing catch up all the time. I still read quite a bit, and became addicted to Mills and Boon early on, loving the happily-ever-after and predictability. My family laughed at my fascination with romantic fiction, telling me they were trashy, but I ignored them and graduated to sexier fiction with more naughty bits. I discovered erotica a few years ago, liking a romantic story with lots of sexy scenes. I enjoy sci-fi/fantasy and paranormal/shape shifter when I’m reading, but my writing style seems to be leaning towards contemporary.

About two years ago, I developed an arthritic condition which had me crippled in pain, and led to me looking for another type of work, since I couldn’t face the thought of going to work in agony each day. I had some money saved, and supported by my mum who was having to take me to endless hospital appointments, I finished at the store which I managed, and set about looking for an alternate means to support myself.

Writing came to mind, but I didn’t really think I had the talent to earn anything. Biting the bullet, I committed myself to writing a novel, and after a few false starts the right story came into my head and in about three weeks I had the first draft. I was fairly scared of sending it off, but I did my research, choosing an online publisher, closed my eyes and pressed “send”, emailing the finished draft off with a shudder.

About three to four weeks later I received the reply that the publisher was interested, and now I’m here writing my “author’s bio” which will be placed in the finished work! Wow!

A: To be honest I don’t really have a typical day. It depends on my mood when I wake up what I will be doing that day. I may head into town for some retail therapy, have a lazy day, or if I’m in “the zone” with writing, I get so immersed in the process, I have to finish it as soon as I can. I don’t write every day, or keep a journal, since I put a lot of myself into writing the stories. I’ll let you figure out which bits.

Q: Who are your favorite authors?

A: I like the romance of Nora Roberts. She also writes as  murder/mystery types of books as J D Robb. I liked the Brac Village stories of Lynn Hagen which are gay erotica which I discovered to my surprise are kind of hot...a surprise since I hadn’t considered gay romance before, but sexy is sexy! Sandrine Gasq-Dion is another great author, and I love the assassin/shifter series. Of the LoveXtreme authors, my favorite is Gabrielle Evans’s Fatefully Yours series.

Q: Do you have any formal qualification for writing?

A: No. I left school at the age of sixteen with no qualifications. I had to move schools as a child every two years, and having such a disrupted education left me having to play catch up each time. When I got to the legal age where I could leave, I walked out of the school gates on my sixteenth birthday and didn’t go back. Later on, in my twenties, I did go back to college, then on to do a degree just to prove to myself that I wasn’t a complete dimwit, although they weren’t related to the writing field, but did give me a chance to practice writing in essay style. For me, reading lots has helped me to find a style and genre that appeals to me, which led to me giving the whole writing thing a go and I am constantly thinking of potential storylines...it can be a bit irritating when someone is trying to talk to me and I zone out!

Q: Why the LoveXtreme imprint?

A: In my fantasies I am this wild woman who is witty, sarcastic and sexy with the ability to attract sexy guys. I find the ménage genre very hot and read a couple of stories from this imprint, and found it was great reading. I love the fact that in stories you can explore your wilder side, kind of a guilty secret pleasure. Of course, now that I’ve put that down, it’s not so much a secret anymore!

A: I think I may have described eight of them in Sexy in the Sun! I have a thing for blonds, though, and think Charlie Hunnam is very sexy. I like a man who can laugh but isn’t nasty with it, like laughing at others for the sake of it. Orlando Bloom is another hottie, especially in his Kingdom of Heaven days.

Q: What inspires you in writing?

A: I constantly have bits of storylines whizzing around in my head. I can be inspired by a person, reading about something or someone or an experience I’ve had. Basically anything and everything has the potential to inspire. I quite often just go off instinct and imagination, especially with dialogue. I like humor in the books I read, not over the top, just to keep the balance, so I try to put that into what I write.

Shadow Ministry: The Power of Three (MMMM)
In Bookshelf
In Cart