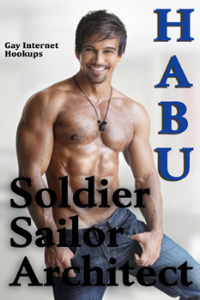 “There, see over there,” he said as we strolled on from Presidents Circle onto Oak Avenue. “There’s the grave of Henry Wise. He was Virginia’s governor in the 1850s. And there, see those two mausoleums side by side over there. Those are both my work.”

“Beautiful,” I said. “Are they connected?”

“No, not quite, come look for yourself,” he said. “I’m glad you asked. These are special constructions of mine. The young men who pose for me love them, or so they tell me.”

That sounded strange, but I followed him over to the mausoleums and, once there, I saw that they weren’t joined, that there was a bit of space between them, that the opening to this space was covered by bushes we could walk behind, and that I was to find out why the young men who posed for him loved these structures.

“Come with me into the secret space between,” he whispered in my ear, having put an arm around my waist and touching me on the forearm with the other one.

“A bit of La Petite Mort,” he replied, kissing me on the ear.

“It’s French for a little death,” and when I gave him a confused look, he said, “It’s a French term for a completion—an orgasm. But the term La Petite Mort for it seems so appropriate in a cemetery. Come with me.”

“You mean we’re going to fuck in there?”

“I mean I’m going to fuck you in there.”

At last, my mind screamed. I went with him.

Mark took me into the space and embraced and kissed me. As he fondled me, he stripped me naked, unzipped himself and flared his trousers open. He then frotted our cocks together. I gasped when I saw how extraordinarily long his cock was. He wasn’t unusually thick, but he was almost impossibly long.

I was leaning against the cold marble of the side of one of the mausoleums, when he pointed out the special features he had constructed into both of the raised tomb buildings, why the young men who posed for him loved this place, and why he brought them here was revealed to me. A scooped area was built into the mausoleum wall to the right, which included a smooth lip jutting out from the building. That’s not what I first noticed though. Leather straps bolted into the marble walls above this scooped portion on either side caught my attention. Then Mark point out foot indentations opposite those features on the wall of the other mausoleum.

When he put me into the feature, I fit perfectly, my chest curving up the scoop in the side wall, thrusting my buttocks out into the narrow space between the mausoleums, my hands gripping the straps on either side, my spread legs bent back, extending over the space between the mausoleums, my feet resting in the foot indentations on the opposite wall. Mark had brought a leather collar that attached to an iron ring set into the wall were my neck was positioned. When he encased my throat in this collar, my cheek was pressed to the cool marble of the wall and I was captured there for his taking.