Cole Demauro is the de facto leader of his coven and he takes that responsibility seriously. But the coven is one member short and finding a witch to fill the spot has proven difficult. It’s not easy to find a person who not only has magic that resonates with the coven, but also fits in. But there’s no doubt the coven needs another witch to bolster everyone’s magic. After all, covens work best with twelve witches.

New to the area and reluctant to join a coven, Justin’s been managing on his own. But it’s no longer enough. When they meet for the first time, Justin’s magic is a mess, and Cole is determined to help. Not only is the beautiful man clearly suffering, but Cole is the type to want to fix it. His attraction to Justin only increases that need. But what neither man expects is how well their magic fits together.

Justin is cautious, but Cole is nothing if not patient. He works to coax Justin out of his shell and persistently shows Justin there’s nothing to fear. When Justin agrees to take the risk, everything falls into place. Justin is a perfect fit for the coven. More than that, he’s the perfect fit for Cole. 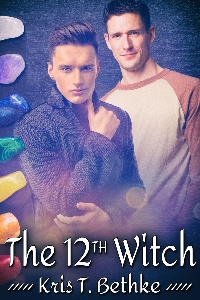 But for the time being, I pushed that aside. “A weather witch!” I waggled my eyebrows. “Can I put in a request for some sunshine in the coming days?”

He stared at me for a long moment, and then a smile slowly broke out on his face. He shook his head, clearly knowing what I was doing, but he at least found it as amusing as I wanted him too.

“You know that’s not how it works.” There was a touch of laughter in his voice and I was glad to hear it.

“I do.” I cleared my throat, getting serious. “Justin, look, before we go any further, do you want my help to settle your magic? Right now, I mean. It can’t be comfortable.”

He winced. “It’s not. I’ve been trying to ground myself, and it’s helped. But using my magic so much without proper balancing has been ... difficult.”

“I bet.” I leaned forward, getting serious. “Look, let me help you. We don’t have to worry about anything else right now. But you’re leaking magic, and you have to be exhausted. Let me help you shield better and get balanced. At least that will get you settled for a few days and you can have a break from the constant pressure.”

Justin studied me, those brown eyes assessing. He chewed his lip for a moment, then seemed to realize what he was doing and let it go. I let him look, let him think, and didn’t rush him. It wasn’t nice, for one. For another, it wouldn’t work if he didn’t let me in. And I didn’t care if he scrutinized me. Not only did I not have anything to hide, but he could keep his gaze on me on as long as he wanted. Having Justin Trews’s attention was not a hardship in the least.

“Can I --” He cut himself off, took a breath, and then met my gaze steadily. “I would like to do a seeking spell first. While I don’t doubt your honest intent, I need to make sure.”

I didn’t even hesitate. “Of course. Absolutely.”

Which would have been my answer no matter what, but I sensed it was even more important to Justin. And that didn’t sit well with me. That after only a few minutes conversation, I could already tell something happened in his past. In a different time or place -- if he joined the coven—I would press to find out why. But now wasn’t the time for that.

He blew out a breath, utter relief cascading over his features. Instinctively I reached out, wanting to soothe, to reassure. Justin jerked back, then seemed to catch himself.

“Sorry about that.” His voice was so soft, I wouldn’t have heard it if I hadn’t been sitting just a foot or two away.

“No need to apologize.” I kept my tone light and easy. “I know you don’t trust me yet, and that’s fine, but there’s nothing to fear here.”

“You don’t need to tell me.” I didn’t hesitate to interrupt. Then I smiled softly. “Do your thing, and then when you see I’m good, we can do the other thing.”

He stared, eyes wide. As though he couldn’t believe me. A couple of times, he opened his mouth as though he was about to say something, but snapped his jaw shut each time. After a minute or so, he just shook his head.

“Thanks.” Justin took a breath, then another, blowing it out and centering himself. He closed his eyes and I was struck by how sad I was to be cut off from his gaze. After a long moment, he opened them again, and held out a hand.

I took it easily, but the second our fingers touched, magic sparked and sizzled against my skin. I jolted but not hard, and it only took a moment for it to settle. I’d been on the receiving end of my fair share of seeking spells, and this one was no different. Except ... maybe it was. It was pleasant, for one, a tickle of his magic bumping against mine. An easy slide of Justin’s power as it mingled with mine. It was almost as if my magic recognized his, which wasn’t possible considering we’d never met. But it felt good, easy, and the longer the spell went on, the better it felt.

With a gasp, Justin pulled his magic back, and I nearly whined at the loss. But I managed to check my reaction before it escaped. This wasn’t about me, and just because I liked the feel of our magics intertwining didn’t mean I needed to voice it. Justin let go abruptly, then actually shook at his fingers, before he dropped his gaze to his own hand and stared at it incredulously.

“Uh, that was weird,” he murmured, almost to himself.